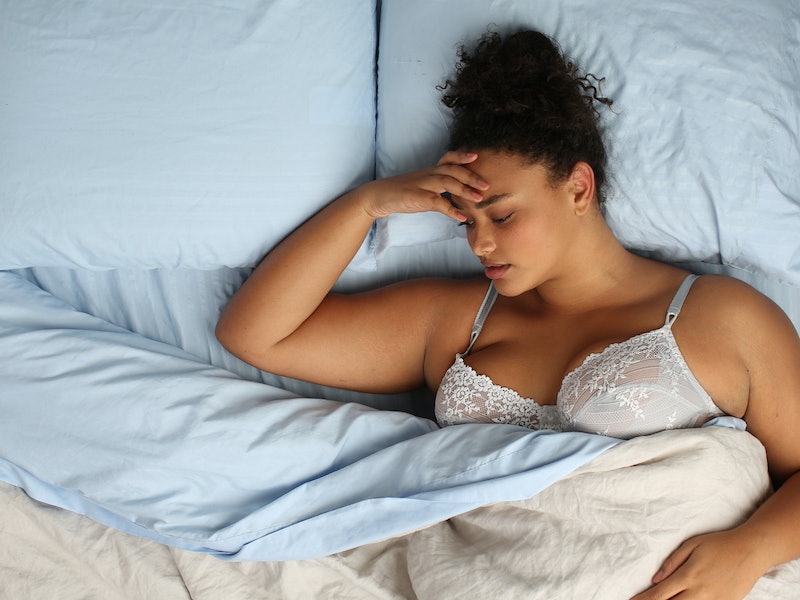 Do you regularly suffer from bouts of insomnia or other issues sleeping? Good news: There’s a whole body of research attempting to explain exactly why that is. What's more, according to a new study, not only does the brain's so-called “sleep switch” exist, the group of cells that form this sleep switch are essential for normal sleep.

Way back in 1996, Clifford B. Saper, MD/PhD, co-author of the current study, and several colleagues published a paper called “Activation of Ventrolateral Preoptic Neurons During Sleep” in the journal Sleep. The paper’s big discovery was that “sleep-activated ventrolateral preoptic neurons innervate the tuberomammillary nucleus, a posterior hypothalamic cell group thought to participate in the modulation of arousal” — that is, that this particular cell group (VLPO neurons) could be the switch that turns the brain on and off so we can sleep. Subsequent research by Saper and colleagues continued to support this idea, including a 2014 study that found that older adults and people with Alzheimer’s who suffered fragmented sleep also had experienced a loss of these cells.

However, questions remained about the specific circuits involved in the preoptic area that seemed to induce sleep, as well as about whether VLPO neurons had anything to do with the body’s ability to regulate its temperature while asleep. That’s what the current study, which is published in the journal Nature, explores — and by selectively activating and inhibiting VLPO neurons in genetically engineered mice through techniques like optogenetics (triggering them to fire by focusing a laser light beam at them) and chemogenetic activation (using chemicals to make them fire), the researchers made a number of valuable findings.

The implications of these findings are pretty big. They tell us that the proper functioning of VLPO neurons is essential for normal sleep. If this group of cells is damaged in any way, you’ll likely experience trouble sleeping. What’s more, the relationship between the behavior of VLPO neurons and temperature might explain how hibernation works in animals.

It's worth noting that the results of a 2017 study conducted by a different team of researchers seemed to contradict what Saper and colleagues have been finding throughout their years of research; however, the current study helped clarify what was actually going on. Published in Nature, “Identification of Preoptic Sleep Neurons Using Retrograde Labeling and Gene Profiling” found that activating VLPO neurons actually woke animals up — but the differences between the results of the two studies can be explained by the speed of stimulation. Said Saper according to Science Daily, “We found that when the VLPO cells are stimulated one to four times per second, they fire each time they are stimulated, resulting in sleep. But if you stimulate them faster than that, they begin to fail to fire and eventually stop firing altogether. We learned our colleagues in the other lab were stimulating the cells 10 times per second, which was actually shutting them off.”

Now, the big thing to note here is that the current study was conducted using mice, not humans. (This is also true of much of the other research examining VLPO neurons and sleep.) That means that we can’t draw wide-reaching conclusions about the behavior of VLPO neurons in humans yet.

But there’s a reason mice are so often used in experiments geared towards shedding light on the human body, mind, and behavior; as LiveScience noted in 2010, “[rodents’] genetic, biological, and behavior characteristics closely resemble those of humans, and many symptoms of human conditions can be replicated in mice and rats” — basically, testing mice is as close as you can get to testing humans without actually testing humans. Plus, researchers can now engineer “transgenic mice” — that is, they can breed mice so that they have specific genes similar to those that cause illnesses, diseases, and other conditions in humans. Because human testing is so much more expensive than rodent testing, researchers will often conduct a variety of studies on a subject using mice before conducting studies on the same subject on humans; it’s sort of a stepping stone.

As such, further research would need to replicate these same findings in studies with human subjects. Regardless, though, Saper and his team have plenty more to come; according to Science Daily, they’re already conducting ongoing studies exploring the relationship between sleep and body temperature. In the meantime, if you’re having trouble sleeping, you might try some of these tips; they might not totally solve the problem, but it might help. And, of course, when in doubt, head to a sleep specialist if you can.

More like this
How To Protect Your Digital Privacy If You Need An Abortion Post Roe v. Wade
By Kaitlyn Wylde
6 Abortion Advocates To Follow On TikTok
By Sara Youngblood Gregory
6 Full-Body Tabata Workouts, Straight From Trainers
By Carolyn Steber
Britney Spears & Sam Asghari Announced Their “Devastating” Pregnancy Loss
By Stephanie Topacio Long
Get Even More From Bustle — Sign Up For The Newsletter