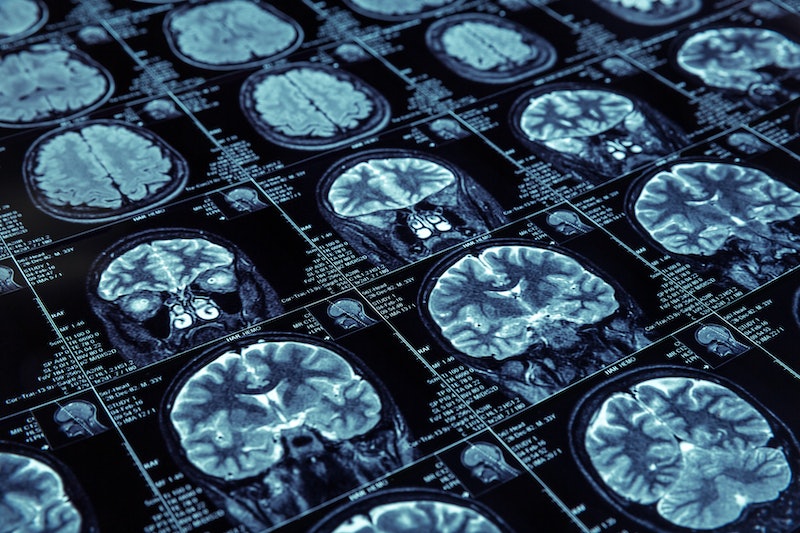 One of the most common, misguided arguments that internet trolls have used to invalidate the experiences of trans people is suggesting that being trans isn't "biologically" possible. While everyday people and science alike have debunked this transphobic myth over and over again, new research is now putting that faulty logic to rest even further. According to a new study, the brain structures of transgender teenagers are aligned with their gender identity, rather than the gender they were assigned at birth.

The research was presented on May 22 at the 20th European Congress of Endocrinology and published in Endocrine Abstracts. Over the course of the study, 160 transgender children and teens experiencing gender dysphoria — a term used to describe the psychological distress some people feel when the gender they were assigned at birth doesn’t match their gender identity — underwent magnetic resonance imaging (MRI) scans. The scans monitored and analyzed brain activity in study participants. Diffusion tensor imaging was also used to measure levels of gray matter versus white matter in the brains of the trans teens. The study then compared these scans to brain scans of teens who did not report experiencing gender dysphoria.

The researchers found that the brains of transgender girls closely resembled those of cisgender girls, and the brains of trans boys closely resembled those of cisgender boys. In other words, the MRI scans confirmed that the study participants were experiencing gender dysphoria, as they reported — which, when many adolescents and youth with gender dysphoria are dismissed because they might 'grow out of it', is big news.

Of course, this study doesn't take into the account that people experiencing gender dysphoria may not identify with a binary gender like male or female, while their dysphoria is still valid. (Moreover, biological "proof" isn't necessary to validate a transgender person's experience.) And though a common experience in the trans community, it’s important to note that not every transgender person experiences gender dysphoria. More research, with a larger sample size, is needed to understand how gender identity may be expressed in the brain.

That being said, this study presents important information that may help teenagers experiencing gender dysphoria. A recent study conducted at the University of Minnesota estimated that three percent of teenagers in ninth through eleventh grade identify as either transgender or nonbinary. Many professionals believe that the distress of gender dysphoria can be worsened (or outright caused) by discrimination, transphobia, stigma, and lack of acceptance. As The Trevor Project reported, a national survey found that 40 percent of transgender adults have attempted suicide at least once in their lifetime; 92 percent of those adults reported that they had attempted suicide before the age of twenty-five.

Other studies have indicated similar findings that point to the fact that the brains of people experiencing gender dysphoria demonstrate differences compared to the brains of people who identify as cisgender. If further research is able to confirm this connection, it may be able to help support transgender teens earlier in life by increasing access to medical intervention. On the other hand, however, in a world where transphobia continues to put transgender folks in harm's way, it's important to consider the potential ramifications of this technology, as well as the potential ramifications of science that continues to enforce a gender binary.

The study’s findings reflect what trans and nonbinary folks have long been expressing, and it comes as a reminder to simply believe transgender people when they share their experiences. While this research is an interesting development in our ongoing understanding of gender, it's important to consider that that understanding is continuing to evolve every day.