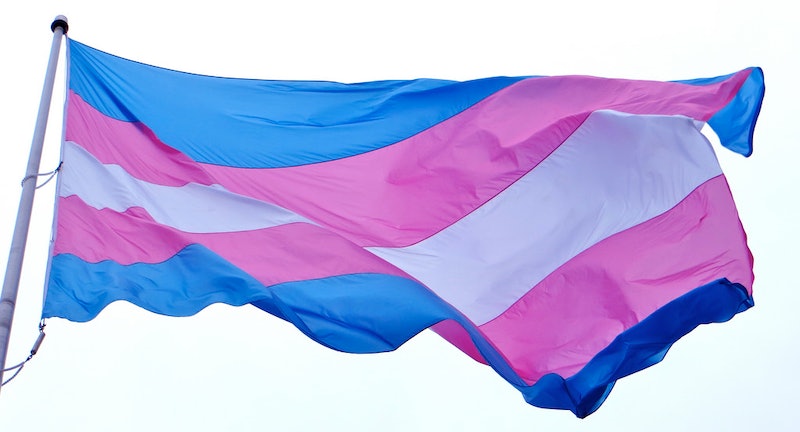 When she spotted a meme claiming that "there are two sexes," “being one sex but thinking you’re the other is a psychological disorder,” not having an XX or XY chromosome was a "mutation," and "enabling" trans people is "sociopathy," Grace Pokela couldn't stay silent — not just because she's a lesbian but also because she's a science teacher. In a Facebook post that has since gone viral, she explains exactly why this transphobic meme is wrong.

"As a biology teacher and avid studier of natural history, the science was awful," Pokela tells Bustle of the meme. "When you study the natural world, you are awed by its complexity. To argue that nature suggests a strict sex or gender binary is simply ridiculous." As Pokela proves, denying people the right to identify however they please is both unscientific and hateful. Biology shows that both sex and gender are fluid and diverse, and suggesting otherwise is merely an attempt to maintain society's existing, expressly not inherent gender hierarchy.

Pokela, who you can find on Twitter at @evolvingWgrace or on Facebook under Evolving with Grace, is a biology teacher at Arlington High School in Lagrangeville, New York. When she first saw the meme, she commented and then put her comment in a Facebook post on her page.

But it's not just the animal kingdom that escapes the gender binary. If you're human, she wrote, "you can be male because you were born female, but you have 5-alphareductase deficiency and so you grew a penis at age 12. You can be female because you have an X and a Y chromosome but you are insensitive to androgens, and so you have a female body." The conclusion? "Don’t use science to justify your bigotry. The world is way too weird for that sh*t."

Let's talk a little more about the bad science pushed by the meme. First of all, it conflates sex with gender by claiming that because "sexes are binary," trans and non-binary people's identities are invalid. In reality, gender identity is completely separate from what chromosomes we have or what's between our legs. Facts about the physical characteristics we've labeled "male" or "female" tell us nothing about gender identity.

So, even if we were all male or female, that would not make LGBTQ people delusional. But we're not. In science, you only need one exception to disprove a rule, and in this case, there are many.

"There are literally millions of organisms and humans proving that statement false," says Pokela. Intersex people — those with bodies that are not traditionally classified as "male" or "female" — make up as many as one in 50 live births in the United States, according to the Organization Intersex International. (It's also worth noting that the meme's use of the word "mutation" to mean something wrong is incorrect; a mutation is any change in a gene, and mutations are what lead new traits to evolve.)

So, as for claims that identifying as something other than a cis man or woman is unnatural, "anything that exists in nature is natural," Pokela points out. "In general, if you study the natural world, it is so wonderfully, wildly diverse. We should embrace the spectacular cacophony of humanity and of nature. Failing to do so only makes your experience smaller and sadder than it is meant to be."

But the use of science to suggest that there's something wrong with being genderqueer isn't just factually wrong; it's discriminatory, and Pokela views it as an attempt to keep certain members of our society below others.

"Once our culture shifted and marriage equality passed, I feel that the right, instead of opening their hearts or reconsidering their position, has simply moved on to what they consider to be an easier target," she explains. "All of the things that are being said about transgender folks now — that they are unnatural, that they are delusional or sociopathic, that they are dangerous — are the exact same things that were being said about gay people just a few years ago. As a cisgendered lesbian, that is simply unacceptable to me. Transgender people are in my community as a queer person, and they are in my community as a human."

There's a lot that allies can do to help right now (and always, of course), too, from donating to organizations that fight for trans and LGBTQIA+ rights to simply listening to people who are members of the community and doing what they ask. This kind of support is more important now than ever — and providing it is essential.