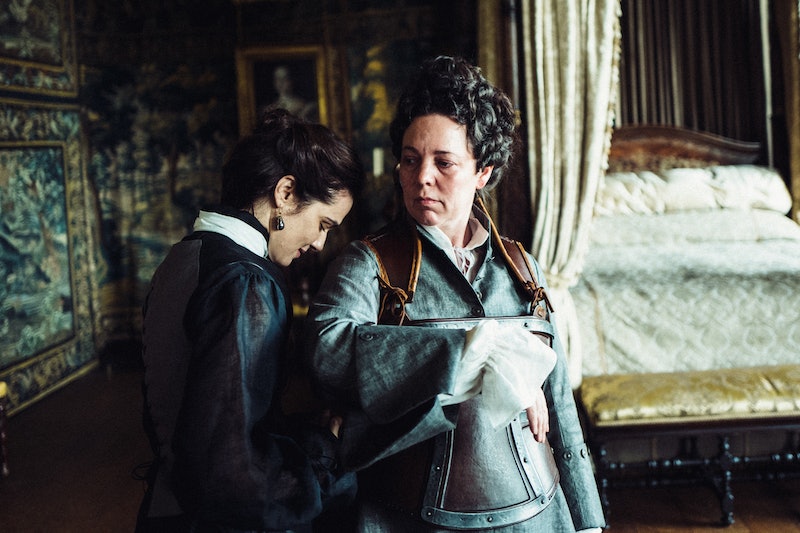 This week marks the announcement of the 2019 Academy Award nominees, which means the race for Oscars gold has officially begun. Each major category is filled to the brim with the very best cinematic releases enjoyed over the past year — and the lucky winners will be revealed live on Feb. 25 during the ninety-first annual ceremony in Los Angeles. And these British 2019 Oscar nominees are proof that the UK is churning out talent at a very impressive rate.

The Brits will most certainly be making their presence known during the 2019 ceremony, because according to the BBC, The Favourite leads this year's nominees with an impressive ten nods from the esteemed academy. The multi-nominated British film, which stars Olivia Colman and previous Best Actress winner, Emma Stone, ties as the most nominated movie at this year's show alongside Roma. Colman, who portrays Queen Anne in the period comedy-drama, has secured a nomination for Best Actress for her captivating performance in the film. However, the 44-year-old will face stiff competition from the likes of Lady Gaga and Glenn Close, who according to Paddy Power, is currently the odds-on favourite to win her first Academy Award for her performance in The Wife, with odds of 4/11.

However Colman isn't the only The Favourite cast member to be celebrating a well-deserved nomination, as fellow Brit Rachel Weisz has also earned herself a Best Supporting Actress nod for her performance. Weisz plays the character of Sarah Churchill, and stars alongside U.S. actress Emma Stone, who has also achieved a nomination for her portrayal of Abigail Masham. Previously, Weisz has taken home the golden statue of Best Supporting Actress for The Constant Gardener — and 13 years later, the British actress is back as one of the favourites in the same category.

Flying the flag in the boys Best Supporting corner is Richard E Grant, who enjoys his first ever Oscar nomination for his role in Can You Ever Forgive Me? When speaking to BBC News about the nomination, the 61-year-old actor said it was "beyond anything I could have ever hoped or dreamt or imagined." Another British actor to be formally recognised by the voting academy is Christian Bale, who has been nominated for Best Actor after his role in the political biopic, Vice. As reported by the Irish Examiner, Bale previously enjoyed Oscars glory after his supporting role in the 2010 drama The Fighter, and this time hopes to claim the title of best actor for his portrayal of the former U.S. vice-president, Dick Cheney. According to bookmakers William Hill, the welsh-born star is predicted to emerge victorious in his category with odds of 11/10, but does face some tough contenders in the form of A Star Is Born's Bradley Cooper, and Bohemian Rhapsody's Rami Malek — who earlier this month walked away with a Golden Globe for his portrayal of the legendary Queen frontman, Freddie Mercury.

The 91st annual Academy Awards will take place on Sunday Feb. 25, and according to the Radio Times, you can watch all the action live on Sky Movies, where the show is predicted to get underway at around 1.30 a.m. in the UK.

More like this
The Sean Bean Intimacy Coordinator Controversy, Explained
By Sam Ramsden
At 28, Lesley Manville Was Acting, Picketing, & Singing Kate Bush Songs
By Olivia-Anne Cleary
Stephen Graham’s Wife Plays A Vital Role In His Career
By Emma Madden and Sophie McEvoy
Jodie Comer & Tom Hardy Join A Motorcycle Gang In The Bikeriders
By Catharina Cheung
Get The Very Best Of Bustle/UK