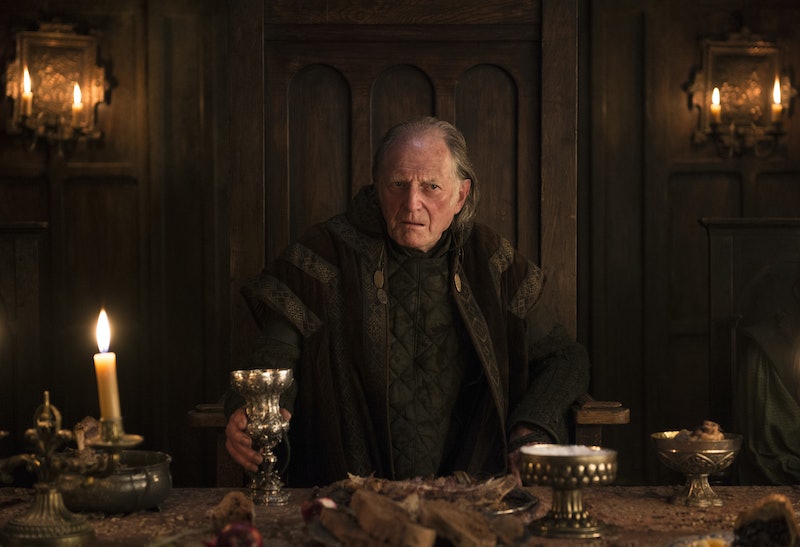 When you're adapting a very long book into a very expensive TV show, you're going to have to make a few changes. That comes with the territory. So when our favorite murder orphan, Arya Stark, went full Sweeney Todd on Lord Walder Frey in season seven of the HBO adaptation of Game of Thrones, I was on board for it. If anyone deserves to eat some of his family members in a pie, it's most certainly Lord Frey, the host of the Red Wedding. In both the book and the show, Frey is a cruel old man who tricks and murders the Starks in cold blood, switches sides to whoever happens to be in power, and doesn't seem to care much for his many children or his wives.

But does Arya force him to eat his sons? Not in the books. The cannibalism scene in the books is much more subtle. And instead of Arya Stark (when did she learn to bake, anyhow?) the mastermind behind the Frey pies is lovable merman Wyman Manderly.

Here's how it goes down:

The Manderlys play a very minor role in the TV show, which is fair enough (there are A LOT of noble houses out there murdering each other already). In the books, however, the Manderlys are in a very awkward position: They were sworn to the Starks, but now that the Boltons control the North, they want to avoid getting killed.

See, Lord Wyman Manderly's sons were part of Robb Stark's army. One was killed at the Red Wedding, and the other was taken prisoner by the Lannisters. And now team Lannister/Bolton have sworn to give poor old Wyman's surviving son back to him, but only if Wyman promises loyalty to the Boltons and marries his granddaughters to Freys. Wyman agrees, because he doesn't want to lose another kid.

So Rhaegar, Symond, and Jared Frey come over to Wyman's house to hang out and eat all his snacks and make sure that he's not about to double cross them. And when Ser Davos rolls up in White Harbor, the Manderlys make a big show of how jazzed they are to marry a bunch of Freys. Wyman even has a fight with his punk, green-haired granddaughter in front of everyone, threatening to ship her off to a nunnery if she won't shut up and be happy with her new Frey husband.

But as soon as the Freys are out of sight, Wyman and his family drop the act, and they let Davos know that they're all really still team Stark. They're going to pretend to execute him, but really they want him to go on a rescue mission up to Skagos to get baby Rickon Stark so they can restore him as King of the North.

Wyman executes a criminal dressed as Davos, and Cersei lets him have his son back. Now that Wyman and the Manderlys are officially pro-Bolton, though, he's expected to attend Ramsay Bolton's wedding to "Arya" Stark (in the show it's Sansa Stark, but in the book, it's poor Jeyne Poole wearing a fake mustache).

So Wyman gives a fancy horse to each of his three Frey "guests," and sends them ahead of him. Once the Freys are out of the Manderly's home, though, they are no longer protected by the sacred laws of hospitality — the same laws that the Freys violated when they murdered guests at the Red Wedding.

On their way to the wedding, all three Freys go mysteriously missing.

Then Wyman shows up at the wedding with his entourage and a ton of food, pretending to be upset that his three Frey buddies haven't arrived yet. All of the other nasty Freys and Boltons have arrived to watch Ramsay marry a defenseless teen girl, and at the reception Wyman gleefully presents them with three huge meat pies:

"The best pie you have ever tasted, my lords. Wash it down with Arbor gold and savor every bite. I know I shall."

Roose Bolton is suspicious, but Wyman eats some of each pie himself, so it can't be poisoned. The Boltons and Freys figure that Wyman can't be both fat and a diabolical genius, so they chow down while Wyman has the bard play the song of the Rat Cook.

The Rat Cook, if you're not up on your Westerosi lore, was a legendary cook at the Nightfort. He supposedly served a pie to a king with the king's own son cooked inside. The king didn't know this, though, and had a second helping. The old gods were furious that the cook had slain a guest under his own roof, and transformed him into a giant rat, able only to eat its own young.

So yeah... that's the song that Wyman plays while feeding three very suspicious pies to the Freys. It's pretty heavily implied that that is where the three missing Freys went. And sure, maybe the TV show's version, with Arya and Lord Walder Frey, was a touch more cinematic.

But shout out to Wyman Manderly for one of the most gruesome, subtle revenge plots in all of literary history.