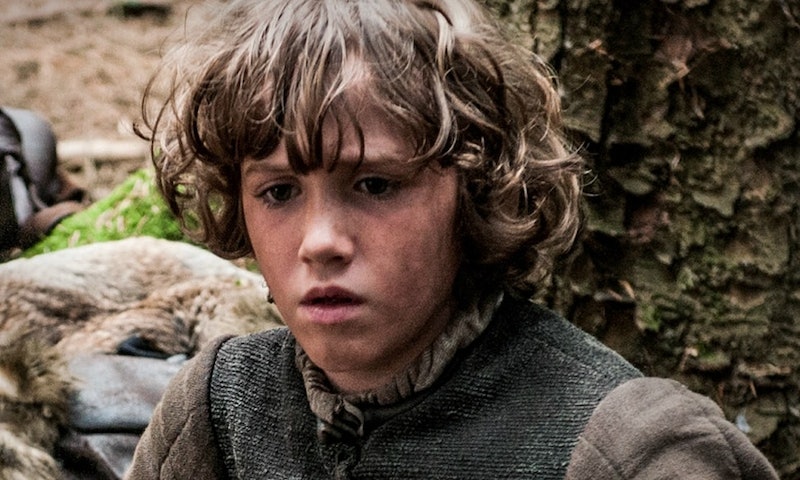 Whether you know of the Game of Thrones universe through the TV show, the book series, or the endless internet articles scrutinizing every last detail of George R.R. Martin's creation, you've definitely heard of the Stark kids. They're (some of) the main characters. They're the kids with all the wolves and the prophecies and the magical tree powers. And there's one more of them in the books than in the show.

To be fair, Rickon Stark was in the show—he was just unceremoniously killed right before the Battle of the Bastards. In TV Westeros, we're down to Jon, Sansa, Arya, and Bran, with Robb and Rickon definitively dead. In the books, only Robb is dead for sure, although Jon wasn't looking too good when last we saw him bleeding out in the snow (we've also got zombie Catelyn running around, but that's a whole 'nother story).

But as far as the books are concerned, little Rickon, the youngest Stark, is supposedly alive and well with his direwolf Shaggydog and his wildling babysitter Osha. The reason we haven't seen him in several books is that he's in hiding out on Skagos.

At the end of the last Song of Ice and Fire book (remember when George R.R. Martin used to write new books?), everyone's favorite Onion Knight is tasked with trekking up to Skagos to retrieve baby Rickon and his puppy, and use his claim on Winterfell to take back the North.

So where the hell is Skagos, and why does it matter?

If you look at a map of Westeros, you'll notice that way up north, right by the Wall, there's an island called Skagos in the Narrow Sea. From what we've heard so far, we know that Skagos is technically part of the North, and sworn to house Stark. But we also know that Skagos is not super involved with Westerosi politics. They're part of the tree-centric First Men, Old Gods tradition. They also rose up in rebellion against the Starks about a hundred years ago. Other Northmen consider the Skagosi to be barbarians, and there are many rumors about the people of Skagos riding unicorns, being descended from giants, and eating human flesh.

Of course, we know that rumors in Westeros have a way of getting out of hand—people also thought that Robb Stark could turn into a wolf, which was just not true (it's his two brothers who can do that). People constantly trade lies about Dany and her dragons, about Tyrion "the Imp," and just about everything else going on in the World of Ice and Fire. So we don't know whether Skagos is truly a creep-fest full of nasty unicorn cannibals, or whether it's just a culture that's a little closer to the Northern wildlings, and therefore looked down upon by the "civilized" folks of Westeros.

Rickon and Osha are not point of view characters, so we haven't seen Skagos through their eyes at all. We'll have to wait for Davos Seaworth to reach Skagos himself before we can check up on how little Rickon is doing. But Rickon's Skagosi adventure could be pivotal when it comes to the future of the Starks.

Davos is sent by the Manderlys to retrieve lil' Rickon, because the Manderlys secretly hate those gross Boltons and want the Starks back in Winterfell. And as far as anyone knows, Rickon is the only Stark left: Bran is thought to be dead (he's really in a tree), Jon is a bastard, Sansa is in hiding with her creepy Uncle Petyr, and Arya is at assassin school in far off Braavos.

So the idea is to take back Winterfell and put Rickon in power. But last time we saw Rickon, he was about four years old. He was a wild child with a totally untamed wolf. He was having the same kinds of prophetic dreams that Bran was having, but he was too young to understand them. He was also too young to understand why everyone in his family kept leaving, so there's a good chance that Rickon will be angry and violent and not super interested in helping to restore the Starks to power.

And now that he's on Skagos, Rickon might be growing even wilder and angrier. If the rumors are true, Davos could be bringing a cannibal child back home to lead the North. Rickon could help the Skagosi finally rise up and successfully rebel against the Iron Throne, further destabilizing the Seven Kingdoms. If the rumors are false, then maybe Rickon has been growing as a powerful warg, like his siblings. Maybe living with the Old Gods culture of the Skagosi will help Rickon to develop his wolfy powers. Maybe he'll even join Jon in advocating for the wildlings, now that he essentially is one, and he'll lead a Skagosi army to take back his homeland.

Maybe the Skagosi, with their remote northern island and their knowledge of the First Men, know something about the White Walkers that the rest of Westeros doesn't. Maybe they, like Craster, even worship the White Walkers to avoid joining their army of the dead. Maybe lil' Rickon will come back only to help the army of snow zombies finally bust through that Wall and take over (sailing from Skagos to the North would be a convenient way to avoid the Wall entirely).

Or, you know... maybe Rickon is long dead and this is all one giant trap.

So really, we have no clue whether Davos and Rickon's next few chapters are going to ultimately help or hurt the Stark cause in the North. We don't even know if they're going to help the humans or the White Walkers. But we do know that this is one major northern culture we haven't heard from yet, and one magical Stark child who hasn't had much to do so far. Martin's not the type to let that slide. So whatever happens on Skagos, good or bad, is going to mean something for the rest of the North—and possibly the rest of the world.