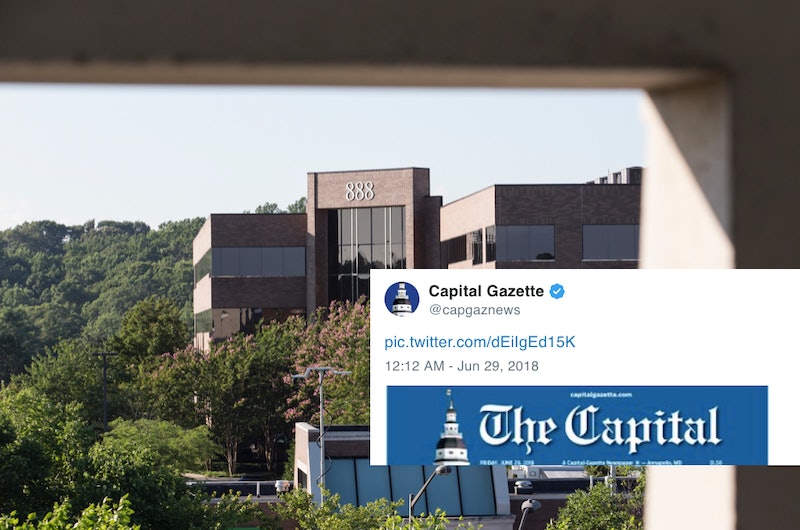 One day after a tragedy tore apart their newsroom, Annapolis reporters have responded with extraordinary professionalism. On Friday, The Capital Gazette's front-page story covered the shooting that killed five of its employees.

Rather than taking time off to grieve, the journalists used the opportunity to make a statement about how they won't be intimidated into stopping their work. "I can tell you this: We are putting out a damn paper tomorrow," Capital Gazette reporter Chase Cook tweeted on Thursday. "Yes, we're putting out a damn paper tomorrow," the paper's official account confirmed shortly after.

The paper published five individual stories on each victim of the attack, four of whom were writers and editors and one of whom was a sales assistant, and also highlighted their work. It opted not to publish an editorial section, writing in its place:

Today, we are speechless. This page is intentionally left blank today to commemorate victims of Thursday's shooting at our office. [...] Tomorrow this page will return to its steady purpose of offering our readers informed opinion about the world around them, that they might be better citizens.

The Baltimore Sun reports that two writers and one photographer toiled on Thursday to produce the front-page story. They worked across the street from the newsroom where the shooting had taken place while police were still patrolling the street with assault rifles.

One of them was Cook. "I don't know what else to do except this," he told The Baltimore Sun. He wasn't present for the shooting; he'd had the day off after covering elections for 16 hours the day before. The other two employees who worked on shooting coverage Thursday had also been absent for the event. According to The Baltimore Sun, reporter Pat Furgurson was out to lunch and Joshua McKerrow was taking the afternoon off after completing an early-morning assignment.

In one of the stories it published on the tragedy, The Capital Gazette described the shooting as "a rare fatal attack against journalists in the U.S. — all the more shocking for the number of victims involved." Until Thursday, just seven journalists had died in the United States as a result of their work since 1992, according to the Committee to Protect Journalists. The most recent case was that of Adam Ward and Alison Parker, who were both shot by a gunman during a live broadcast on August 26, 2015. None of the cases involved more than two casualties, making the Capital Gazette tragedy even more remarkable.

The Capital Gazette's stories on the victims are moving tributes. It described editor and community reporter Wendi Winters as "a prolific and dependable writer." Sales assistant Rebecca Smith was a recent hire who "had already proved herself a valuable asset." Reporter John McNamara had a "razor wit" and covered sports, which was his dream. Editor Rob Hiaasen was "an endearingly goofy storyteller." Editorial writer Gerald Fischman had "a biting sense of humor that charmed his colleagues."

All died when a gunman opened fire in their newsroom on Thursday afternoon. The shooter may have been motivated by a grudge he held against The Capital Gazette: He sued the paper for defamation in 2012 after it published a story alleging that he'd harassed a woman.

Crime reporter Phil Davis tweeted about the shooting as it was happening. "Gunman shot through the glass door to the office and opened fire on multiple employees," he wrote shortly after reaching safety. "There is nothing more terrifying than hearing multiple people get shot while you're under your desk and then hear the gunman reload."

"We are heartbroken, devastated," editor Rick Hutzell told The Capital Gazette for its front-page story.