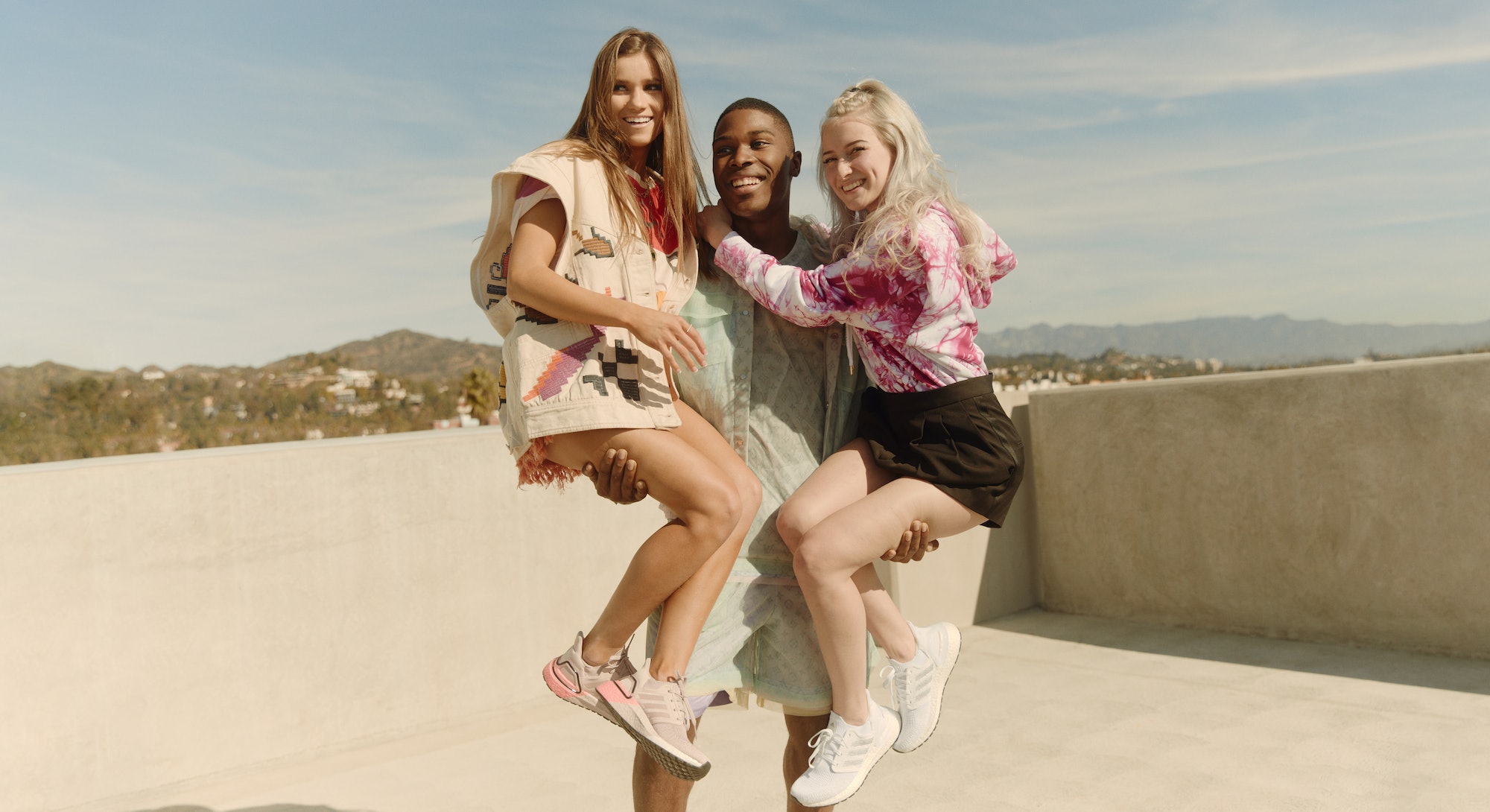 As I try to interview Cheer’s La’Darius Marshall, Lexi Brumback, and Morgan Simianer on the rooftop of Netflix HQ in Los Angeles, we are constantly stopped by passing employees. “You really touched my heart and... can I shake your hand?” one grown man gushes. La’Darius obliges, laughing. Lexi says she’s recognized most of the time she goes out. Morgan tells me she’s received “thousands and thousands” of DMs from fans sharing their battles with mental health.

It’s the Navarro team’s first-ever press tour to promote Cheer, the word-of-mouth docuseries that premiered earlier this month. The show is beautifully inspirational and at times, deeply uncomfortable. For most of the cast, this is their first trip to a city as big as Los Angeles. After our photo shoot — another first — the squad appeared on Ellen, where DeGeneres awarded them a check for $20,000 in collaboration with Shutterfly.

It’s likely that the TV host felt compelled to donate to Navarro because of the documentary's excellent economic and class critique of cheerleading itself. The stories of students who lack privilege succeeding in a sport typically reserved for rich kids reverberates in a time when extreme college debt reigns and the 1% is gaming the athletic scholarship system. Cheerleading itself is one of the most prohibitively expensive team sports to be a part of. Fees start at $3,500 to $5,000 per year, on top of school tuition, according to La’Darius, and then there are extra fees for competitions, travel, uniforms, and housing.

“Unless you have an unnatural talent, it’s hard if you come from a broken background,” Lexi explains. By chance, many in Navarro’s squad do. We learn that Morgan was abandoned in a trailer by her parents, while La’Darius discusses homophobic bullying by his brothers.

“[My brother] actually hit me up after [watching] and he told me how proud he was ... and it really meant a lot to me because he doesn't really ever say much or he really doesn't show any emotion,” La’Darius beams.

For others, like Morgan, it’s Coach Monica Aldama who fills the gap of absent or estranged parents. “She’s like a mother figure to me,” Morgan repeats episode after episode. With her impeccable nails and immovable hair, the team — and Corsicana, Texas, locals — hold Aldama in godlike reverence. Winning might bring glory to their school and their team, but it’s hard not to feel like Coach Aldama is the one for whom they really perform.

On Cheer, everything culminates with a “2-minute-and-15-second” performance at the 2019 NCA National Championships in Daytona. For collegiate cheerleaders, that 2:15 apogee can justify or call into question the broken bones and broken spirits in a yearlong training. But then, it’s over. Some get to return to Navarro to cheer for another year or two (the junior college allows for up to three years cheering on a two-year associate's degree), and some don’t. Because this style of competitive cheer does not exist in the televised, ESPN world of pro-sports, no clear career path exists. Even professional cheering for a team like the Dallas Cowboys isn't an option. “They’re more showgirls,” La’Darius explains of their focus on choreography (and hairography) that leaves no room for tumbling or pyramids. So while this is a relatable conundrum for many college graduates (hi, liberal arts degrees), one can’t help wonder: What’s next?

For most, it's more of the same. La’Darius and Morgan have extended their junior college education at Navarro so they can compete for a third year, while their teammate Jerry Harris returned to Corsicana after spending a semester at Louisville. Gabi Butler is now a squad alum and she's currently competing on Top Gun 005, a Miami-based All Stars team and works full time as a “cheerlebrity.” And, Lexi has announced her triumphant return to Navarro despite being dismissed last fall due to an incident allegedly involving drugs found in her car.

“I’m so lucky that I got to come back,” Lexi says, referring to Coach Aldama’s forgiveness despite an explicit zero-tolerance policy. In an interview with Us Weekly, Coach Aldama explained, “She did have to sit out in the fall semester and I felt like she had enough time to reflect on it and learn from it.” Lexi spent the term at Blinn College instead, and even cheered against her former Navarro teammates. Recalling the awkward encounter, Lexi says, “I saw all my friends in their Navarro uniforms and I was in a Blinn uniform and it just felt weird.”

Though Cheer shows us genuine, humble, and talented athletes, given the success of the series, you'd be forgiven for expecting the cast to turn into jaded influencers, plumped with fillers, high off their own supply, and rolling in endorsement deals. They haven't, but the cast now find themselves here, in Los Angeles, famous for something that doesn’t make them any money. What’s more all-American than that?

When I ask La’Darius, who is majoring in kinesiology, if he could transition to dance or competitive gymnastics, he laughs. “The only other sport that I do outside of cheerleading is more cheerleading,” he says, adding that if he tried, he would “get far, but not that far.” La’Darius is hoping to sign up for EMT classes in Mississippi, where he’s currently coaching All Stars, and will aim to later pursue either firefighting or ultrasound technician work. When I ask Morgan if she knows what she’s doing the week after Daytona, she shakes her head, “I'm just taking it day by day and just taking it all in.”

Though Lexi is only in her second year, she seems the most ready to make the jump to anything else, if not for personality alone. “I’m not going to be [in Corsicana] that long,” she says when talking of her long-distance relationship with boyfriend Dominic Green. As we sip tiny cardboard boxes of water, we discuss the conservatism of Texas. “My boyfriend is trans. I really support that community,” she tells me, before recalling details of her “worst injury.” It wasn’t from cheerleading: It was from trying to sneak into a private pool by jumping over a fence. “Oh yeah, [the fence] did its job,” she says about her sliced ankle. When talking about school, she tells me about her love for digital art and her plans to go to art school after graduating from Navarro as an art major. She speaks at length about the similarities between architecture and cheerleading pyramids. “It’s really difficult to put together something so beautiful,” she says, and then reminds herself, “I need to get a job soon.”

Cheer is available in 190 countries, but cheerleading is extremely American — both the idea of pep-talking crowds and athletes, and the competitive, disciplined art form of the scholastic cheering world. Then there’s the stories behind it, the faux-bootstrapping and the real-bootstrapping of some special competitors, and the hyperspecialization of something that used to be just for fun. But unlike the basketball hopefuls in last generation’s Hoop Dreams, the Navarro cheerleaders have a chance to take their palpable joy, their indomitable perseverance, and their charisma onto the internet, where they can serve as inspirational leaders, brand ambassadors, music video performers, actors, models, and yes, influencers. Or, they might attempt something more difficult: returning to a normal life.