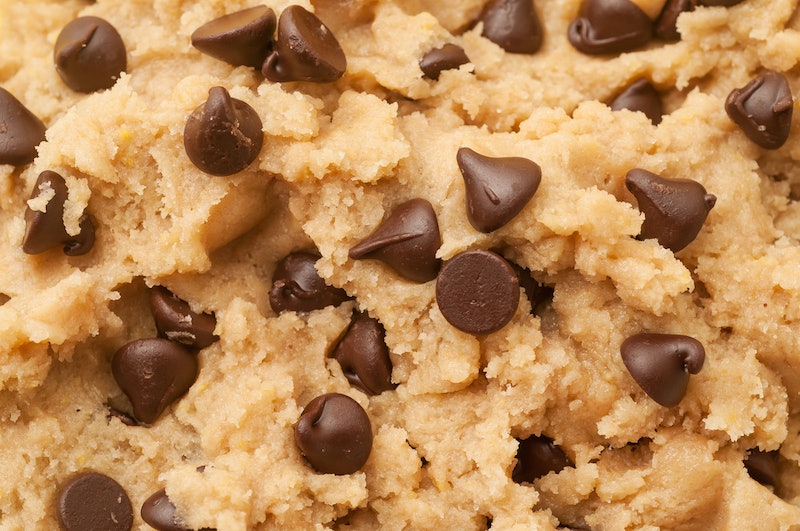 The end-of-year holidays are frequently full of delicious things to eat, including a wide range of baked goods and other desserts. But if you’ve been considering just, y’know, trying some of the dough or batter from the next treat you make before you bake it, the Centers for Disease Control and Prevention (CDC) would like to remind you of one very important food safety tip: Don’t eat raw cookie dough or batter. As a warning issued by the CDC at the beginning of December notes, doing so can make you really, really sick. What’s more, the danger that can arise from eating raw dough isn’t necessarily due to the reason you might think it is.

By “the reason you think,” I mean, “Cookie dough contains raw eggs, which are not recommended that you eat.” And to be fair, the whole “don’t eat raw eggs” thing is part of the concern: Raw eggs can contain the bacteria salmonella, which, when consumed by humans, can result in salmonellosis — a variety of food poisoning. According to the CDC, eggs can become contaminated with salmonella in a few different ways. It can happen due to poultry droppings encountered by eggs while they’re being laid; it can arise due to environmental factor, like contaminated feed or bedding; and if a chicken or other poultry already carries the bacteria, they can contaminate the insides of eggs before the shells are even formed.

Humans who develop salmonellosis from eating contaminated foods or coming into contact with the bacteria usually begin experiencing symptoms like diarrhea, cramps, and fever within 72 hours; they might be sick for four to seven days, although in some cases, the illness can be more severe. Healthline notes that the chance of an egg being contaminated is pretty slim — the outlet points to a study from 2002 which found only one egg out of every 30,000 to carry salmonella — but it’s best to err on the side of caution anyway. Per the CDC, cooking eggs to an internal temperature of at least 160 degrees Fahrenheit before eating them prevents salmonellosis. Also, buy pasteurized eggs and store them refrigerated at 40 degrees or colder. And wash your hands. Seriously — do not neglect correct handwashing.

But raw eggs aren’t the only concern when it comes to unbaked cookie dough; there’s another issue, too: Raw flour.

As the CDC notes, flour is a “raw agricultural product” — that is, it hasn’t been treated to kill bacteria, germs, and other contaminants. That means that anything that might contaminate the wheat (or, y’know, any of the other things you can make flour out of) while it’s the field or at any point during the milling is probably still there at the end of the flour-making process. These contaminants are typically killed off when the flour is baked or cooked, which is why it’s specifically raw flour that’s the problem.

As a major 2016 CDC investigation and recall of flour produced at one factory in Missouri reminded us, e. coli can be one of the big concerns with regards to raw flour; interviews with people who fell ill during this e. coli outbreak revealed that 76 percent reported that either they or someone they lived with had used flour in the week prior to their becoming ill, while 50 percent reported tasting raw, homemade dough or batter. Additionally, three children who fell ill had played with or eaten raw dough at restaurants.

Moral of the story: Don’t eat any baked goods or other foods made using flour known to be contaminated — and don’t eat raw flour of any sort, whether it’s been recalled or not.

Which brings us back to raw cookie dough. No matter how strong the urge might be, do not sneak a taste of any dough or batter you might have whipped up during a holiday baking bonanza unless you desperately want to develop salmonellosis, fall prey to e. coli, or otherwise suffer from a foodborne illness. If you absolutely must eat raw cookie dough, you’ll be better off finding a recipe that’s specifically formulated for eating uncooked. Typically, that means there are no eggs present, and that the flour used is heat treated — that is, you bake the flour on its own for about 10 minutes before mixing up the dough. Or, y’know, just get some cookie dough ice cream — the dough used in these kinds of ice cream flavors has been treated to kill bacteria, according to the CDC.