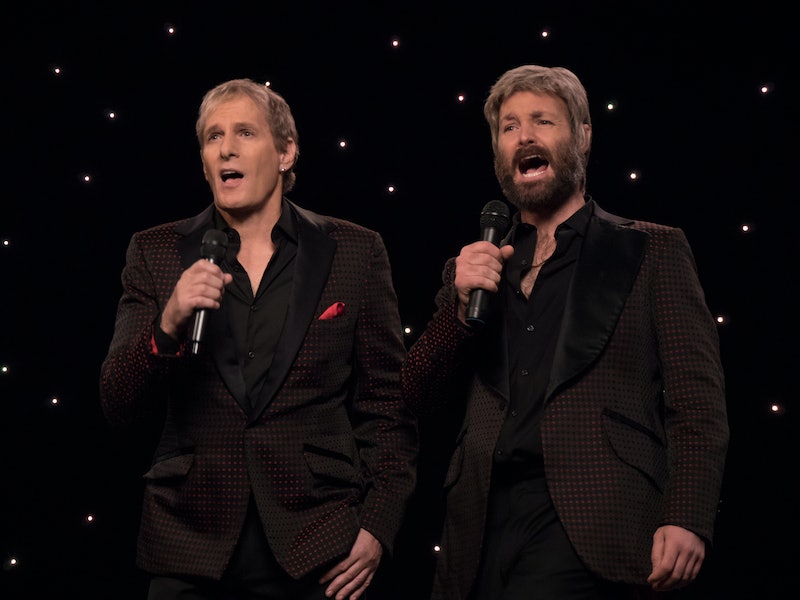 February is for lovers, and Netflix is entrusting its one and only Valentine's Day Special to a man you can count on to bring the romance. Michael Bolton's Big, Sexy Valentine's Day Special hit Netflix on Feb. 7 and this love extravaganza is best viewed while sipping champagne and wearing a silky smoking jacket. The singer has called on some famous friends to join him for the musical variety special, so the cupid duties aren't solely on his shoulders. Who are the celebrity guests for Michael Bolton's Valentine's Day Netflix special? This party is going to be as funny as it is big and sexy.

Netflix says that the goal of Bolton and his guests is singular: "to get people in the mood to make love." To that end, they'll be performing both music composed especially for the event and some classic baby-makin' Bolton hits. (It'll be a scandal if the set list doesn't include "When A Man Loves A Woman" and "How Am I Supposed To Live Without You?") Expect a fair amount of sketch comedy too. Because what's more appealing than a sense of humor?

Here's a rundown of the announced celebrity guests who are helping Michael Bolton reawaken your passion for Valentine's Day:

It's The Lonely Island who awakened a nation to the comedic genius of Michael Bolton when they saddled him with a fictional Pirates Of The Caribbean fixation for a Saturday Night Live digital short. It's only right that the guys help out here. While Samberg and Taccone are in front of the camera, third member Akiva Schaffer is behind it, co-directing the special with Comedy Bang! Bang!'s Scott Aukerman.

This woman knows her way around an old-school variety show. Rudolph hosted her own singing, dancing, and comedy hour in 2014 and then teamed up with Martin Short for the Maya & Marty series.

SNL vet Parnell helped The Lonely Island pioneer the Digital Short with "Lazy Sunday;" kept the 30 Rock crew in questionable medical advice as Dr. Spaceman; and voices one or more characters on most of the best animated shows.

The star of serious fare like Masters Of Sex and Far From The Madding Crowd may seem like a strange fit here, but Sheen has a wry sense of humor and happens to be dating one of the funniest women on the planet, fellow guest star Sarah Silverman.

Casey Wilson is a pro at playing over-the-top characters, which is the exact vibe of this Valentine's Day special.

The Eric Andre Show is anarchist comedy at its finest and its host is one of the most unpredictable performers in the business, so he's definitely someone to look out for when you tune in.

Mr. Bolton also welcomes Fresh Off The Boat, Veep, and The Interview actor Randall Park, who's equally adept at playing the goofball and the straight man.

And here's one more Saturday Night Live alum to round out the cast. Will Forte is currently stretching the limits of network comedy in Fox's post-apocalyptic series The Last Man On Earth.