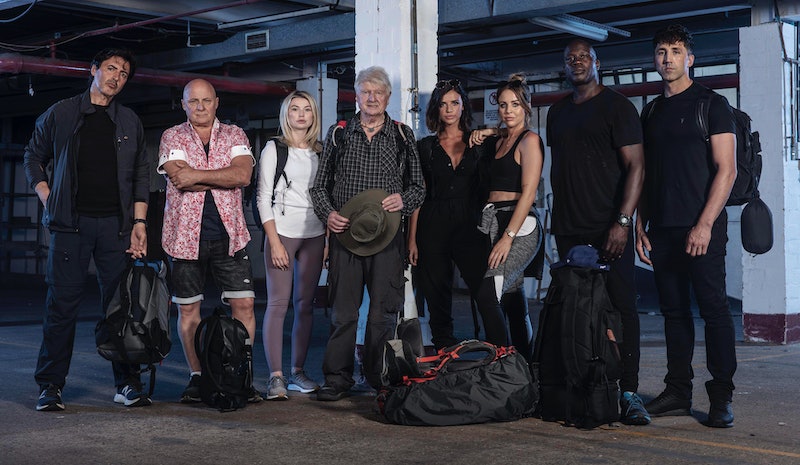 Every year some of our favourite faces from sports, music, entertainment, and reality TV join forces with Channel 4 to put a new twist on some of the shows you know and love, all in the name of Stand Up To Cancer. From Gogglebox to First Dates Hotel, TV's biggest series do something a little different in order to raise money for charity. However, there’s one show which isn’t quite as relaxing as watching TV with your friends and family or going on a date abroad. Well, the Celebrity Hunted line-up has been revealed and I honestly tip my hat to each and every one of these guys. Because this challenge is far from easy. A lot of the stars chosen this year are pretty used to having cameras follow chasing them, but not law enforcement.

Celebrity Hunted returns later in 2019 for a third season in aid of Stand Up To Cancer. The reality TV show, which challenges celebs to evade the "hunters" (former and serving police, intelligence personnel, and on-foot teams) and remain off the grid for as long as they can, is always a completely gripping watch.

This season, two TOWIE stars, two professional rugby players, some celeb chefs, and an unlikely pair of pals will be taking on the hunters.

Lydia Bright and Lucy Mecklenburgh, who both used to be on The Only Way Is Essex, might be going through pregnancy together right now, but we'll see them on a completely different adventure in Celebrity Hunted. They’re joined by rugby players Martin Offiah and Gavin Henson. Celebrity chefs Aldo Zilli and Jean-Christophe Novelli will be trying their luck. And the line-up is completed with I’m A Celebrity mates Stanley Johnson and Georgia ‘Toff’ Toffolo. Well, at least they’re used to roughing it.

Really tense and hilarious at times, Celebrity Hunted proves how seemingly impossible it is to remain off the grid. With no phones, social media, or help from the outside world, it’s anyone's guess as to who will be successful this time around.

Celebrity Hunted is just one of the shows that will be aired in Channel 4 in autumn 2019 to raise money for Stand Up To Cancer. Last year Naomi Campbell and Noel Gallagher, Jamie Dornan and Nick Frost, and One Direction’s Liam Payne and Louis Tomlinson all settled down in front of their TV’s for a Gogglebox celebrity special. This year's line-up is yet to be announced.

Speaking about this years SU2C line up, Channel 4's Commissioning Editor for Entertainment Tom Beck said in a statement:

“Every year we continue to be wowed by the amazing array of famous faces who give up their time so generously and of course the incredible public who campaign so fiercely and donate so much. We can’t wait to see the celebrities in action, banging that Stand Up To Cancer drum – be it sitting on the sofa and watching telly, going on the run or hopefully finding love in the stunning Italian countryside.”

If one things for sure, it’s Celebrity Hunted 2019 promises to be more seriously tense, unpredictable, and funny than ever. There’s no telling who will thrive in the high pressure environment and who will crumble. You can catch it as part of Channel 4’s 2019 line-up for SU2C.