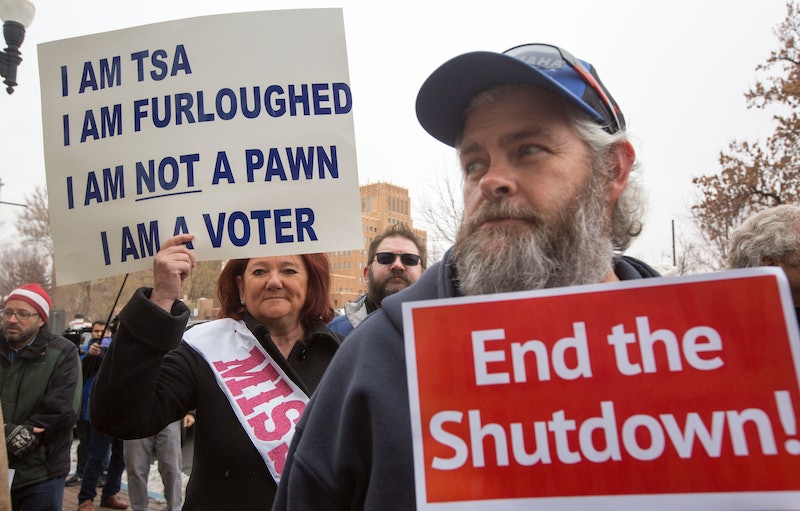 On Jan. 25, Donald Trump announced an end to the longest federal government shutdown in U.S. history. However, there's a possibility that the government's reopening could be short-lived. According to Trump, the chances of the government shutting down again are higher than you might've hoped. In a recent interview, Trump said he thinks lawmakers have pretty low odds of developing an amendable spending bill deal by the Feb. 15 deadline, the Wall Street Journal reported.

Presently, a bipartisan group of 17 members of Congress are working to devise a spending deal before the stopgap measure that reopened the government on Jan. 25 expires in around three weeks, the New York Times reported. During an interview with the Wall Street Journal, President Trump expressed little confidence that the group could achieve this task. “I personally think it’s less than 50-50 [that they come up with a deal], but you have a lot of very good people on that board," Trump told the paper.

The president indicated on Jan. 25 that he is willing to close the government again if Congress doesn't come up with a border security agreement that he finds acceptable. During formal remarks at the White House that day, the president asserted that " ... if we don’t get a fair deal from Congress," the government will shut down on Feb. 15 or he'll declare a national emergency.

Trump has also indicated that he is unlikely to accept anything less than his proposed $5.7 billion for border security in an upcoming spending bill. “I doubt [I would do] it,” Trump said of the prospect of accepting a smaller amount to the Wall Street Journal. “I have to do it right.”

As the New York Times reported, members of Congress are definitely very aware of the tight timeline in which they have to work — and some have indicated that there is concern about whether a spending deal that is agreeable to all parties will be reached. As Senator James Lankford, a Republican from Oklahoma, told the paper:

I think everybody’s relieved that the government’s getting back open ... But I think everyone’s still a little tenuous because we’ve got a sword of Damocles hanging over us three weeks from now to see if we can get things worked out.

However, there simultaneously appears to be some optimism among lawmakers that a deal will be struck and another shutdown will be avoided. Indeed, Senator Shelley Moore Capito, a Republican from West Virginia, told the Wall Street Journal that Congress needs to demonstrate to the public that it can work together. As Capito put it:

I’m going to remain optimistic…if you look at the impetus from both sides, the shutdown was a miserable experience for everybody ... There’s a lot that tells me we may not get there, but there’s more that’s telling me we have the urge to demonstrate we can reach a consensus or we’re signaling to the American people there’s going to be two years of this [fighting] all of the time.

Time will soon tell whose predictions about the likelihood of another shutdown will come to fruition. As Feb. 15 approaches, you can be sure that many Americans will be watching the actions of the president and Congress very closely.