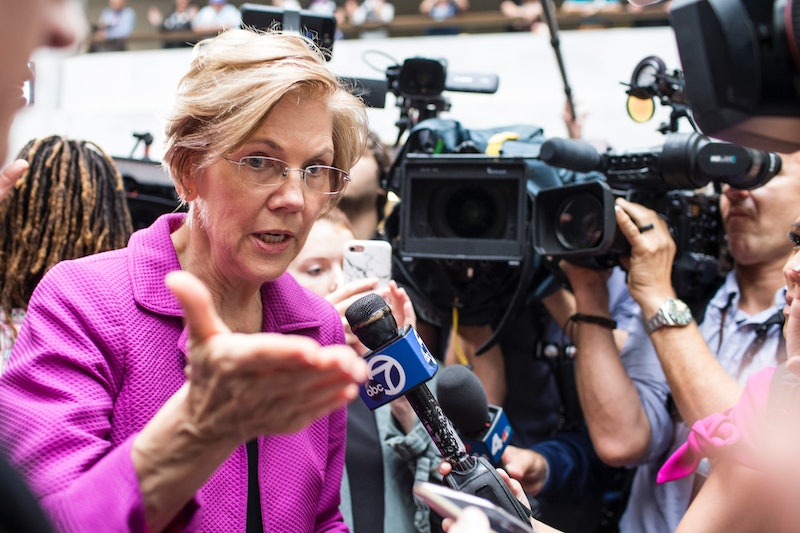 When Massachusetts Sen. Elizabeth Warren released the results of a DNA test proving her Native American ancestry, she called President Donald Trump's bluff. He had promised to donate $1 million to the charity of her choice if she did just that — and it turns out she knows just where she wants the money to go. The charity Elizabeth Warren wants Donald Trump to donate to is the National Indigenous Women’s Resource Center (NIWRC). They work to end gender-based and domestic violence perpetrated against Native American women.

"Remember saying on 7/5 that you’d give $1M to a charity of my choice if my DNA showed Native American ancestry?" Warren tweeted Monday. "I remember — and here’s the verdict. Please send the check to the National Indigenous Women’s Resource Center."

The NIWRC might not want to start spending that $1 million — at least until the check comes in the mail. Trump made the promise at a rally in Montana in July. "I will give you a million dollars to your favorite charity, paid for by Trump, if you take the test and it shows you're an Indian," the president said at the time.

On Monday, Trump denied he ever made the promise. "I didn’t say that," Trump told reporters outside the White House. "Nah, you’d better read it again."

The organization, if it received the donation, could offer more in the terms of resources, events, and projects. NIWRC "supports and upholds grassroots advocacy and policy development work to address" gender-based violence and domestic violence against women and children. They offer webinars, safety guides, and consult with tribal jurisdictions to grow best practices.

The group has also spoken out specifically on Trump's treatment of Warren and his "Pocahontas" slurs. The press release noted NIWRC is non-partisan but decided it had to speak out about his use of the name.

"We view the President’s disrespectful use of the name 'Pocahontas' as especially significant in the context of violence against Native women," NIWRC's press release read. "Pocahontas, of the Pamunkey Tribe in Virginia (which was just recently granted Federal Recognition status in 2016, after over 400 years of colonization), was kidnapped and subsequently raped by colonizers in her early teens."

"Pocahontas is not a Disney Movie. She is not a colonizer’s fantasy of a Native Woman. She is not a costume. She is not a mascot or a caricature of the past. She is not a joke, nor should she be used in attacks against other women," the press release continued. NIWRC said the use of the name "dehumanizes this relative who, as a child survivor of rape, experienced colonization and genocide at the birth of the United States of America."

Trump used a different line of attack to go after Warren on Monday. "I hope she’s running for president because I think she’d be very easy,” Trump told the reporters outside the White House. "I hope that she is running. I do not think she’d be difficult at all, she’d destroy our country. She’d make our country into Venezuela. With that being said I don’t want to say bad things about her because I hope she’d be one of the people that would get through the process."

Warren proved Trump wrong, but he's already moved onto the next jab.