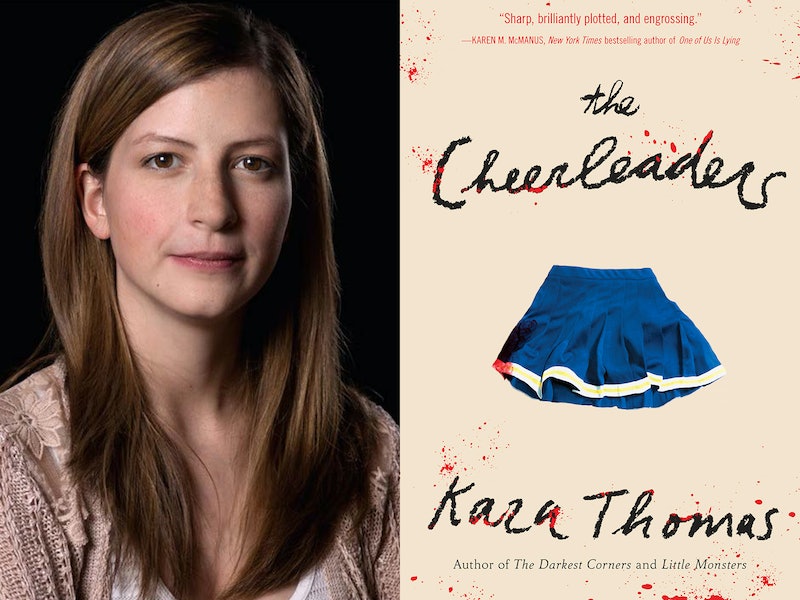 The whole "truth is stranger than fiction" adage is repeated so often for a reason: Real life is really freakin' weird — just look to the state of Florida for proof. In fact, sometimes real life is so weird that it leaves you thinking, "This would make a phenomenal novel." And sometimes, an author will have that exact same thought... and well, write that novel.

Kara Thomas was inspired by a real-life case while writing The Cheerleaders, a young adult mystery that circles the suspicious deaths of five cheerleaders — two were killed in a car accident, two were brutally murdered during a sleepover, and one died by suicide. It's been five years since the deaths, and all the cases are solved. But the town — and Monica, the sister of one of the dead cheerleaders — can't forget what happened. As she begins searching for answers about the tragedy, she learns that there might be a more sinister explanation for what happened to the cheerleaders.

I asked Kara Thomas about the unsettling true case that inspired her creepy, twisted young adult novel and how she writes books based on actual events without exploiting the victims of the crimes. Here's what she said:

The Cheerleaders by Kara Thomas, $12.23, Amazon

Can you tell us about the true story that inspired The Cheerleaders?

Kara Thomas: The Cheerleaders is very loosely based off events that happened in the town of Dryden, New York, in the late '80s and early '90s. I first read about the Dryden tragedies in E. Jean Carroll’s excellent longform piece about the town. The condensed version is that several people connected to the local high school were killed in a short period of time — three were cheerleaders, two of whom were abducted and murdered.

Thomas: When I was reading the story about what happened in Dryden, I was struck not by the details of the crimes, but by the question of, "How could so many terrible things happen to one community?" I wound up making the characters in the book cheerleaders, because I thought the contrast was important: How does a school who has lost half its cheerleading squad — its symbol for spirit and hope — ever bounce back?

When I was reading the story about what happened in Dryden, I was struck not by the details of the crimes, but by the question of, "How could so many terrible things happen to one community?"

Thomas: Yes— I don’t think a victim of a specific crime should ever be the fictional inspiration for a character, because the author runs the risk of re-writing a real person’s story and exploiting it. I think there are ways to borrow from real cases in order to probe the darkness in our society without appropriating the most horrific thing that has ever happened to someone’s family.

When I was reading the story about what happened in Dryden, I was struck not by the details of the crimes, but by the question of, “How could so many terrible things happen to one community?”

Thomas: All of my books have women and girls as main characters; I’m just not interested in the emotional growth of male characters. I grew up on detective novels and thrillers featuring tormented male leads, and I’m so glad the genre has moved past women being relegated to the role of the sassy sidekick, the nagging wife, or the dead body. That being said, in the midst of a true crime genre boom, I think there is a dangerous fixation with the men at the center of these cases. Steven Avery and Adnan Syed are household names, but how many people remember that Hae Min Lee and Teresa Halbach were murdered? This phenomenon unsettles me and it’s always at the back of my mind when I write. The victims in my books tend to be women and girls because I write about women and girls, so I have to be hyper-conscious of keeping them at the center of their own stories and not letting them disappear.

Steven Avery and Adnan Syed are household names, but how many people remember that Hae Min Lee and Theresa Halbach were murdered?

What are some books, movies, or podcasts based on a true story that you always recommend to friends?

I’ll never stop recommending Lost Girls by Robert Kolker to people. It's based on the unsolved killings of sex workers who were found on Gilgo Beach, Long Island. It’s less of a true crime book in that not much time is given to the ongoing investigation — Kolker is more concerned with telling each victim's story. The result is a heartbreaking portrait of women that society scorned before their murders; Kolker’s sensitive portrayal of their lives and how they wound up in sex work is a contrast to the way the media treated the victims both when they went missing and after their bodies were found.

The Cheerleaders is on sale now.