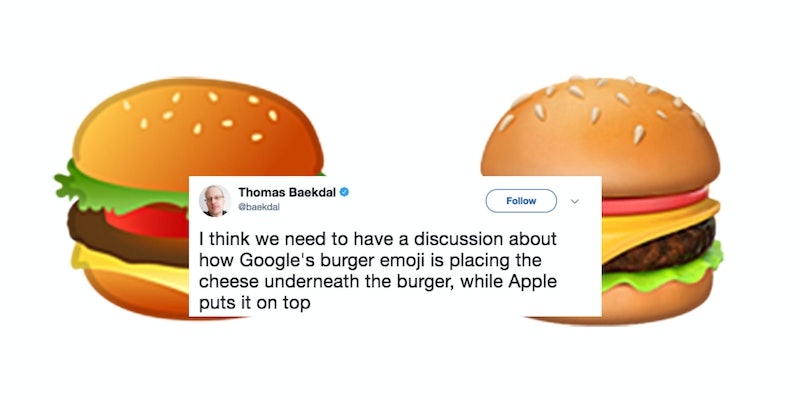 While the rest of us were distracted by finally learning the secret behind the Grand Bro of Hawkins Steve Harrington's luscious locks on Stranger Things this weekend, the rest of the internet was embroiled in a debate that may just change the state of burger consumption in America forever. It all started with a tweet about the cheese placement on the Apple and Google burger emoji. "I think we need to have a discussion about how Google's burger emoji is placing the cheese underneath the burger, while Apple puts it on top," tweeted author Thomas Baekdel. Within hours, a full-fledged volcanic eruption of responses had flooded in from cheese lovers across the globe.

It's no secret that that there are subtle and sometimes less-than-subtle differences between emoji on different platforms. For instance, the grimacing emoji on Apple (aka my resting face) made a lot of waves last year, because the version of it that Samsung and Google users received looked like it was about to start a fight with the next person who looked at them the wrong way. For people who depend on emoji to express the feels that words alone cannot, this kind of miscommunication can create some hella awkward situations. Or, y'know. Start a small culinary war in an unsuspecting man's Twitter mentions.

I'm going to be honest: not once in my 26 years on this earth have I ever concerned myself with where the cheese goes on my burger. So long as there is cheese, there is happiness in my heart. But as it turns out, there are a lot of factors to consider when stacking ingredients on a burger — from the degree that the cheese is melted, to the sanctity of the lettuce and tomato, to time-honored traditions I've apparently been ignoring since biting into my first patty.

First, to ease your mind, a bit of a settlement to this debate before we fully sink into it. Bustle reached out to several meat experts regarding this topic, and will update this post upon reply; in the meantime, we can look to Bobby Flay's previous advice re: burger stacking. He not only puts the cheese on top of the burger, but has a hack to make it even more delicious.

First, wait until the burgers are almost fully cooked, and then apply the cheese on top (he prefers a thin slice of white cheddar and American). "Some water in a pan, and then we just cover the pan and create steam," he explained to Matt Lauer on the TODAY show. "It's gonna melt the cheese completely, which is really key." After a few seconds, the cheese should be evenly melted on the burger, and decidedly on top.

Flay's opinions on burgers are from definitive, though. People's preferences for their cheese/meat/condiments stacking were all over the board. Some of them were inspired by sheer logic.

Others even cited burger diagrams, which is a thing that I was just delightfully informed exists. (Appropriate to hang a poster of this in my adult apartment, or nah?)

Others were a little less married to the rules, and had reason to ~mix things up~.

And yet another user pointed out that, technically, both the Apple and Google emoji are wrong.

At one point, in an effort to seek the ultimate truth, Baekdal even called upon the power of Gordon Ramsay.

(Side note: I would like to wife that gigantic burger and move away to an island where we live in harmony and never contend with another human again.)

Finally, multiple people attempted to bring some clarity to this burger debate with Twitter polls, which have since amassed thousands of votes from people who are apparently very passionate about this thing I never once considered until today.

All's well that grills well, though, because even Apple Google's CEO Sundar Pichai is apparently addressing this urgent issue as I type this article. The internet can let out a collective sigh of relief; our animated burgers are accounted for, and our children are safe.

... On that note, does anybody else really, really want a burger right now?