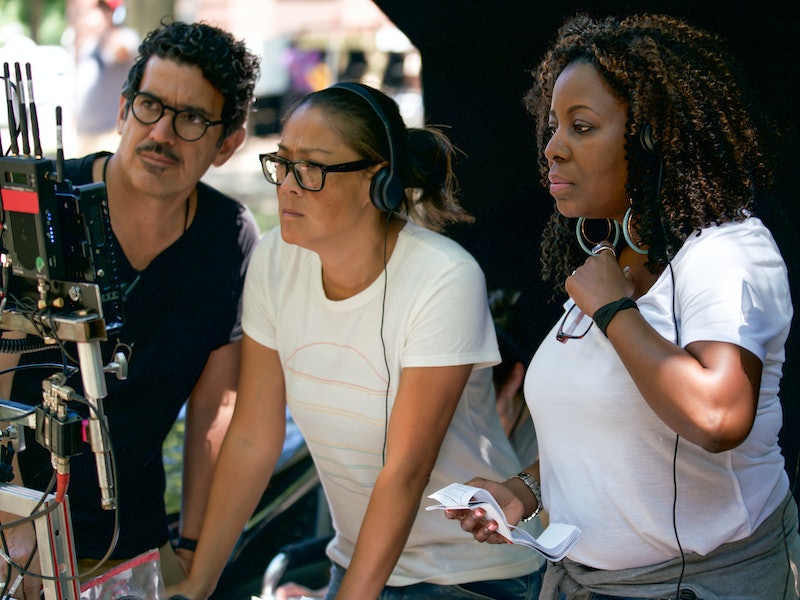 The Chi has captivated a legion of loyal fans with its gritty yet heartfelt depiction of the African American experience on the South Side of Chicago. The story so far has been primarily filtered through the eyes of four Black males of varying ages — Emmett, Brandon, Ronnie, and Kevin — and the series will continue to follow their lives when Season 2 drops on April 7. But thanks to The Chi’s new showrunner Ayanna Floyd Davis, this upcoming season will also usher in some important and necessary changes both on and off screen when it comes to telling the stories of the female characters. And making sure they're told by mostly women of color, too.

Per the AV Club, Floyd Davis, former co-executive producer for Empire, Hannibal, and Hit the Floor, replaced Season 1 showrunner Elwood Reid this season. An Ohio native who lived in Chicago for five years as a graduate student at Columbia College Chicago, Floyd Davis says it felt rewarding to not just tell the stories of Black Chicagoans onscreen, but also be in a position to hire people she felt could do the job right.

“Seven out of ten episodes were directed by women,” she tells Bustle in a phone interview. “One of those women was Salli Richardson Whitfield, who is from the South Side of Chicago. I also hired about 8 Columbia graduates to work on the set. I really wanted to make [the creative team] more Chicago and include people who really know the city, walk the city, and get the complicated issues going on in the city. And, half of the writing staff is also women. We have Black women, millennials, and women who are 40+ who can relate to characters like Jada.”

Specific details of the writing room changes from Season 1 to Season 2 aren't readily available, but either way, it was Floyd Davis' goal to make sure the creative team was a reflection of the show's characters and as diverse as possible. And it really shows.

To prepare for her new role, Floyd Davis carefully studied Season 1 to see how she could keep the elements of the series that were working and re-frame areas that, in her opinion, needed more development. She decided that Season 2 would be more character driven, focusing on themes surrounding fatherhood, single motherhood, and social institutions such as prison and the military.

"I felt like the women in Season 1 were in black and white and I needed to put them in color...I said to myself, 'What are these women’s lives like outside of these men?'"

But she also wanted to balance all of the heavier subject matter with fun and joy to fully encapsulate Black life.

“I heard somebody say that people want Black people’s rhythm but they don’t want our blues. That’s the balance of the show to me,” Floyd Davis says. “I wanted to give the rhythm and also the blues. The joy and pain. It still needs to be entertaining. We don’t want people to feel like they are watching a sad documentary. We want people to feel entertained but at the same time we want to maintain that grit and that hope and that edge. So it’s a balancing act.”

Part of that balancing act meant examining the Black experience through the show's women and girl characters, separate from their male counterparts. “I felt like the women in Season 1 were in black and white and I needed to put them in color,” she says. “It was kind of an easy problem to solve because the first year you are finding the show and trying to figure out what it is and the second year you have the advantage of hindsight so I was able to play with more material. I said to myself, 'What are these women’s lives like outside of these men?'"

For example, Jada (Yolonda Ross), a single mom to wayward teen Emmett (Jacob Latimore), is extremely important to Floyd Davis, who invested a lot of energy into this character specifically, right down to her hair, makeup, and wardrobe this season. This extra care is primarily because Jada reminds her of not only her own mother, but many Black women who often put the needs of everyone else above their own well-being. Now, according to the showrunner, Jada’s womanhood will be explored outside of being a mother.

"I am a Black woman, obviously, so hiring Black people and women is natural for me. I hire White people too but my brain is wired to be inclusive so I don’t have to work hard at it. I like interesting people no matter what their background is."

“You know, she’s a chocolate sista,” she says with a hearty laugh. “I just felt like she’s so pretty and I really wanted to illuminate her beauty and let her be sexy. You see pictures of Yolonda on the red carpet and she’s a gorgeous woman. And, when you’ve been a mother all your life and all you do is care for people as a caregiver, it’s sometimes hard for women, especially Black women, to take care of themselves and treat themselves kindly. I wanted to make sure I treated Jada kindly this year and went through great lengths to make sure we took care of her.”

Jerricka (Tiffany Boone) will also take on a larger, more independent role outside of her relationship with Brandon (Jason Mitchell). Season 1 established her as the supportive girlfriend, but now Floyd Davis says its time for fans to discover what really makes her tick and what her aspirations are as a young woman outside of tending to her boyfriend.

“I really wanted to explore this with Boone’s character Jerricka,” Floyd reveals. “I wanted to explore what her life was like outside of Brandon and what her dreams and goals were. You could tell from Season 1 that she was smart and loyal but I wanted to see her in action. So I told the writer’s room that we have to start here and that’s how you get the women really snapping into color this year.”

You can feel the love and care Floyd Davis put into authentically portraying these women — and Chicago — throughout the second season. And it couldn't have been done without Floyd Davis taking just as much care to ensure that her set was as diverse as possible.

She says her penchant for inclusivity is hard-wired into her DNA and fits into her overall goal to amplify marginalized voices. "The more women we have in positions of power, the more you will see that," says Floyd Davis. "I am a Black woman, obviously, so hiring Black people and women is natural for me. I hire White people too but my brain is wired to be inclusive so I don’t have to work hard at it. I like interesting people no matter what their background is."

Floyd Davis is certainly making things even more interesting in The Chi Season 2 with fresh perspectives, expanding the show's main characters, and a placing a larger focus on the lives of its Black women and girls. The series will definitely be better for it.