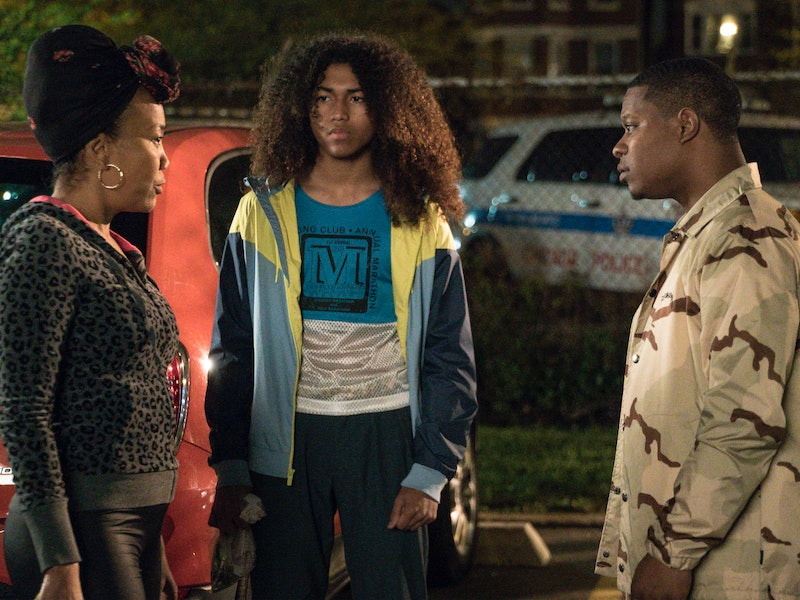 The brainchild of Emmy-winning actor and writer Lena Waithe, The Chi (director: Roxann Dawson, one episode) made its official series debut on Jan. 7. Viewers were introduced to a ensemble group of characters, each with a special connection to the South Side of Chicago and to each other. Standing out amongst the crowd was street-savvy Coogie, with big hair and and an even bigger California sense of style to match. Spoilers for the season premiere! Unfortunately, Coogie's time on The Chi is short-lived. Midway through the premiere episode, he is shot dead by Ronnie due to his perceived involvement with the earlier killing of another teen named Jason. Although unbeknownst to Ronnie, Coogie is completely innocent. So who really killed Jason on The Chi?

There isn't a lot known yet about Jason or why exactly he was near an alleged trap house, though his final whereabouts could be the key to uncovering who his killer is on the show. But although Jason most certainly deserves justice, the identity of his killer isn't the most important part of The Chi. The series isn't just a "whodunnit" that aims to have viewers wondering week after week who shot who, or who'll get shot next. Instead The Chi is about shedding a light on the people left behind to pick up the pieces when the violence that encapsulates the city of Chicago claims another victim.

Waithe wanted to use The Chi to shine a light on the dangers of her hometown. “They were walking through the neighborhoods that I lived in, been around,” she told The New York Daily News of a news report about gun violence. “I didn’t know the people the [reporter] was interviewing but I felt like I knew them and I felt like I wanted to tell their story.”

Despite its dark turns and heartbreak, the series brings plenty of humor and hope to a group of people frequently failed by society. A 2017 study published in the Journal of Personality and Social Psychology found that even if black and white men are the same weight and height, people perceive the black men to be more physically dangerous and threatening. This in turn means that unfortunately black men, like the ones in The Chi, are never really given a fair chance to succeed simply because of how they look.

But combating stereotypes is the purpose of The Chi. In passing, Jason is remembered by his mom and Ronnie for being a star athlete and honor student. Likewise, the episode begins with a carefree Coogie riding his bike around the neighborhood. Long before he becomes the "boy who stole sneakers off a dead kid" or that "boy with the long hair who got shot," Coogie is shown to be a funny and skilled negotiator in a conversation with a bodega owner, and a compassionate teen who cared for a neighbor's starving dog.

Other characters fighting the stigma include Coogie's brother Brandon, who's an aspiring chef with dreams of opening a restaurant with his girlfriend; teen sneaker head Emmett who just wants to take care of his kids; and Kevin, an elementary school kid whose only goal in the premiere episode is getting the attention of a girl at school but finds a hidden talent in the process.

While there is definitely still work to be done decreasing violence in inner cities, The Chi beautifully illustrates how real people live day-to-day in Chicago, rather than focusing solely on the flawed system they’re struggling within. Characters like Jason, Coogie, Brandon, Emmett and Kevin — who were and are neither ruthless drug dealers nor gun-slinging gangbangers — are a simple but much-needed reminder that especially in "war zones," human life exists.