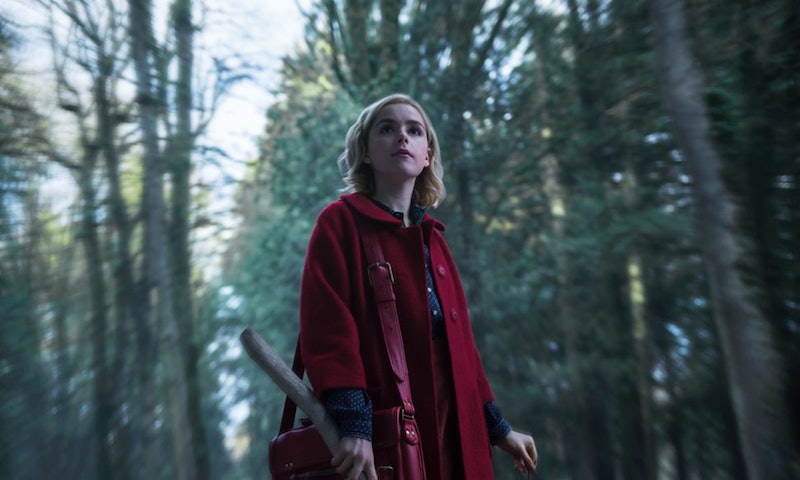 Ever wondered how Jughead and Betty would fare over in Greendale for a chilling Round 2? Bizarrely enough, fans might not have to wonder about that for too much longer, since the Chilling Adventures of Sabrina holiday special could include a Riverdale crossover, according to several reports published Monday morning, Nov. 12. And whoa, if this crossover business is for real, who else's Christmas wish list just became significantly less unrealistic?

OK, so the potential for some Riverdale cameos in Sabrina's upcoming holiday episode remains somewhat up in the air at this point. (That said, a particularly rousing tweet from Roberto Aguirre-Sacasa, who created both series, suggests it's certainly a possibility, at least.) But, even if the Riverdale crew doesn't storm the hallowed halls of Baxter High this winter, the Chilling Adventures of Sabrina's forthcoming seasonal installment is definitely on its way.

After flipping through a handful of Monday's reports about this exciting tidbit of Sabrina news, it looks like Netflix's spooky yuletide special —appropriately titled Chilling Adventures of Sabrina: A Midwinter's Tale — will see the Spellman witches ringing in their holiday season with a little ghostly tradition.

"The Church of Night, like all covens, celebrates the Winter Solstice, the longest night of the year, when families gather around the Yule Fire to sing pagan carols and tell ghost stories," reads Netflix's official description for the upcoming holiday episode, according to TheWrap and Decider.

So, the Sabrina gang's all here, it would seem. How the heck did folks from Riverdale High get involved, then? It was the latter half of Netflix's reported logline for the new holiday special that's had the internet buzzing about Riverdale. Continuing, it hinted at some unexpected "guests and visitors" who will apparently be joining the Sabrina cast during A Midwinter's Tale. To that end, the description reportedly reads,

Sound ominous? If the holiday episode's "unwelcome guests" end up looking like the folks from Riverdale, then it seems entirely safe to say the special's future audiences will be considerably more welcoming than its cast of characters. Ahead of the morning's big Sabrina announcement, Aguirre-Sacasa took to Twitter Sunday night, Nov. 11, with a subtext-laden teaser that has fans all but convinced that A Midwinter's Tale's unwanted visitors could be making the trek to Greendale (where Chilling Adventures of Sabrina is set) from a nearby fictional town with an un-coincidentally similar name.

"Big news for the Archiverse coming tomorrow, stay tuned..." wrote Aguirre-Sacasa on Twitter Sunday night, captioning a Christmas-y cartoon strip from the Archie Comics, off which both Chilling Adventures and Riverdale are based. Now, those familiar with the Archie Universe and all its wonderful crossover potential might know already that — fictionally speaking, at least — the towns of Riverdale and Greendale actually aren't very far apart, geographically. Remember Jughead and Betty's haunted trip to Greendale way back in Season 2?

In light of the logistics, plus the shared creator, it definitely seems like the Riverdale kids would make prime candidates for A Midwinter's Tale's unwelcome visitors. But, either way, who's ready to celebrate this holiday season with the Spellman sisters? (Hopefully, a rep from Riverdale High will be there, too.)

More like this
'The Sandman’s Ending Is A Departure From Neil Gaiman’s Comic Book Series
By Kadin Burnett
Everything To Know About 'Evil' Season 4
By Meguire Hennes
Everything To Know About The Sandman Season 2
By Kadin Burnett
Does 'Locke & Key’s Ending Mean There Could Be A Season 4?
By Sophia Moore
Get Even More From Bustle — Sign Up For The Newsletter