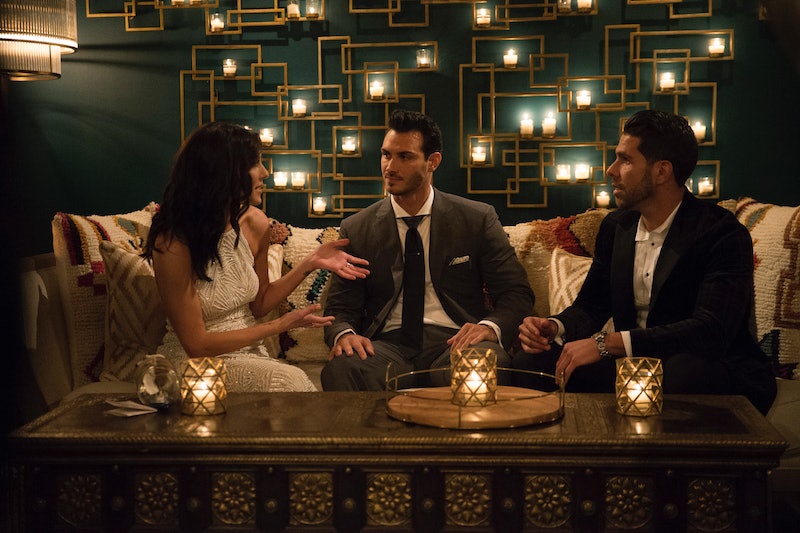 Every season on The Bachelorette, there's always talk about who's on the show for the right reasons, and this time, it happened before the season premiere even ended. On Monday night's episode, Becca's contestants Chris and Chase fought about what happened before The Bachelorette (or allegedly happened), leading to one of the most awkward cocktail party moments ever. And judging by the way Becca reacted, she's going forward with a very low tolerance for drama this season.

At first, Chris and Chase made their limo entrances like everyone else; Chris' was pretty impressive, considering the fact that he brought an entire choir to sing to Becca, but neither of them really gave off any hints that something was about to go down. But then, once the cocktail party kicked off, Chris started sharing some intel he supposedly had about Chase that he found out before the show. As he told some of the other guys, he knew Chase's ex, Danielle, and even though they'd dated a long time ago, she had to warn him that Chase wasn't there for the right reasons. Unfortunately, he didn't get into the specifics, but clearly she was still holding a grudge after two years.

And because this is The Bachelorette (and let's not lie, we're all here for the drama, right?), of course the guys egged him on, encouraging him to go confront Chase, and confront Chase he did.

Chase was pretty WTF about the whole thing; he didn't quite understand why Danielle would even talk to Chris (or what she would have said that would have compelled him to speak up). According to Chase, he and Danielle only dated for about two weeks, and they were never in a relationship. Obviously, it's impossible for those of us watching at home to know if Chase (or Chris for that matter) was telling the truth, but he seemed adamant enough about getting ahead of these rumors that he went to tell Becca about them himself.

However, he did probably the worst job ever at explaining what happened. He was tripping over his words, and Becca was visibly confused about what was going on. Worst of all, he tried to explain Danielle's behavior by saying, "that's women," and honestly, when has that ever been effective when talking to a woman? And as if he wasn't shooting himself in the foot enough, he then decided to bring in Chris to help him hash this all out... and things just got worse and worse.

Nothing truly got accomplished during that conversation; more than anything, it was just Chase and Chris throwing up a few red flags. Chris didn't look good by calling Chase out, and Chase didn't look good by being involved in this mess, either, regardless of what may or may not have happened in his past relationship.

Becca's reaction was basically like anyone's would be, watching two guys she just met try to explain themselves about drama that she's not even involved in. Her tolerance for BS seems pretty low, and after what she went through last season with Arie, who can blame her? Besides, that entire confrontation was a total disaster from start to finish; if it was that cringe-y for those of us who were just watching this unfold from our couches at home, just imagine how it must have felt to be Becca, living through that. Ugh.

It seems like Becca is willing to give Chase the benefit of the doubt for now, but it wouldn't be surprising if she kept this little encounter in the back of her mind while she continues to narrow down her pool of contestants in the coming weeks. This season may have just started, but it's already clear that she's not messing around.