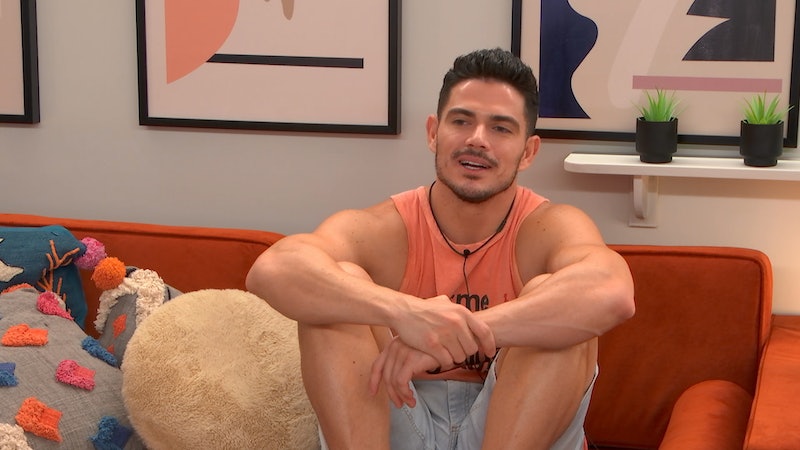 A little over two months after The Circle aired on Netflix, its spinoff, The Circle Brazil, has arrived on the streaming service. This time, an assortment of Brazilians are cooped up in the same, nondescript Manchester apartment building, trying to best each other through social media. One such contestant, João Paulo Gadelha, or JP, is prolific on Instagram for one thing: being hot. And he's going to use that attribute to his advantage on the game.

Not only has he appeared on the Lady Boners subreddit (because that is apparently a thing), but JP is also a model back in Brazil. As a result, he understandably works out all the time and seems pretty into his muscles (he is introduced onto the show flexing, after all). And that's exactly the persona he's going to use on the show, too: "I'm not just a shallow, good-looking guy," he says in Episode 1. "I have much more to offer than a body." However, he's going to pretend to be a shallow meathead in order to best his competition.

Here's what else fans can learn about JP from his Instagram and how he's amassed 657K followers (hint: it's probably the swimsuit pics).

He's Obsessed with His White Speedo

For coastal Brazilians, going to the beach is a favorite pastime. However, JP takes his waterside lifestyle to another extreme with his favorite boy-short Speedo. He loves it so much, in fact, that JP has 12 different Instagram posts in the item.

JP Is a Military Firefighter

Per an August 2019 Instagram post, JP explained that he was lieutenant in the Brazilian Army for eight years, and now he's a soldier for the Bahia Fire Department. "My military service will help me in The Circle, for sure," JP says in Episode 1. "I'm very picky and meticulous. Willpower, bravery — these are my strategies."

He Loves to Travel

JP has posted Instagrams in places like Rio de Janeiro (obviously), Paris, Rome, Argentina, and England, among others.

Although JP said in his intro that he loves animals of all kinds, he's most photographed with an adorable golden retriever.

While JP won't be able to go to any beaches while he's on The Circle, maybe he brought his beloved Speedo anyways.