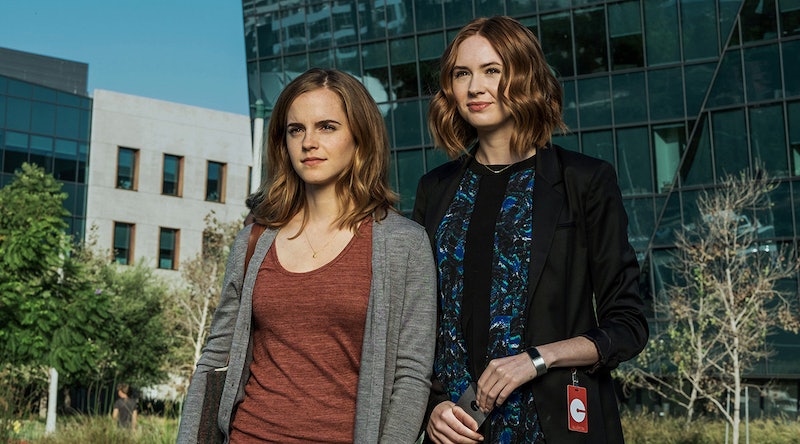 Adapting a book for the big screen is never easy. Luckily, The Circle director James Ponsoldt, who also co-wrote the script with the author himself Dave Eggers, has plenty of experience in this area. Ponsoldt's past two films, The End of the Tour and The Spectacular Now, were both book adaptations. And, just as with his previous works, The Circle movie includes a few major changes to the book. Fans of the original novel might be shocked to find out some of these The Circle movie vs. the book differences, but, where's the fun in movie without surprises?

When it came to adapting Eggers' book, Ponsoldt had two major challenges: narrow down the story to fit into a two-hour film and make sure the technology in the film wouldn't look too dated in 10 or 20 years. "I think a lot of the challenge of this was choosing [what] should not be included in the film, because Dave's book is so packed with ideas," Ponsoldt told CinemaBlend. The director focused on the main themes and conflicts of the book — technology and surveillance — to help get rid of any unnecessary story detail or tech. "I think it all comes down to putting the value system in the people and the relationships and let the technology fall into the background of it, hopefully invisibly," Ponsoldt added.

On the whole, The Circle is pretty faithful to the book. The story still follows Mae (Emma Watson), a young woman who gets a dream job at a massive tech company, The Circle. There, she becomes increasingly enamored with the company and its community culture. The Circle's main objective — to see all and create a kind of surveillance heaven in the name of transparency — also remains in tact in the film adaptation.

There are, however, a few major changes. Most notably, the role of Bailey (Tom Hanks), one of the Circle founders, appears to have been expanded in the film, making his character specifically a bit more of a villain. Furthermore, the character of Francis, Mae's semi love interest at The Circle was left out of the film, though it's likely his character was incorporated into the character of Kalden/Ty (John Boyega). But the biggest difference between The Circle movie and the book is the ending — spoiler alert.

At the end of Eggers' book, Mae is confronted with a choice: bring down The Circle and prevent the company from gaining immeasurable control over the entire world with their surveillance devices, or reveal that Kalden is plotting against the company. In the novel, Mae decides to turn Kalden in and accept the reality of a surveillance state. In the film, however, Mae exposes The Circle and turns the table on founders Bailey and Tom Stenton (Patton Oswalt) by forcing them to reveal their personal information to the public (just as their devices do). It sounds like a happy ending, but Eggers recently hinted that the film doesn't have the nice, tidy ending one might expect. "It does not turn the ending around and make it happy — but it's different," Eggers revealed in an interview with Mother Jones.

Sure, Mae and Kalden briefly triumph over The Circle, but technology will advance with or without them. The changes to The Circle might change plot points, but it doesn't change the fact that technology will continue to advance surveillance, whether we like it or not.

More like this
The 'Spiderhead' Movie Ending Is Nothing Like The Short Story It’s Based On
By Morgan Leigh Davies
You Might Want To Rewatch 'Elvis' For This Britney Spears Easter Egg
By Grace Wehniainen
What Does The Presley Family Think Of 'Elvis'?
By Arya Roshanian
What’s New On Netflix: 'Stranger Things' & 'Mean Girls'
By Arya Roshanian
Get Even More From Bustle — Sign Up For The Newsletter