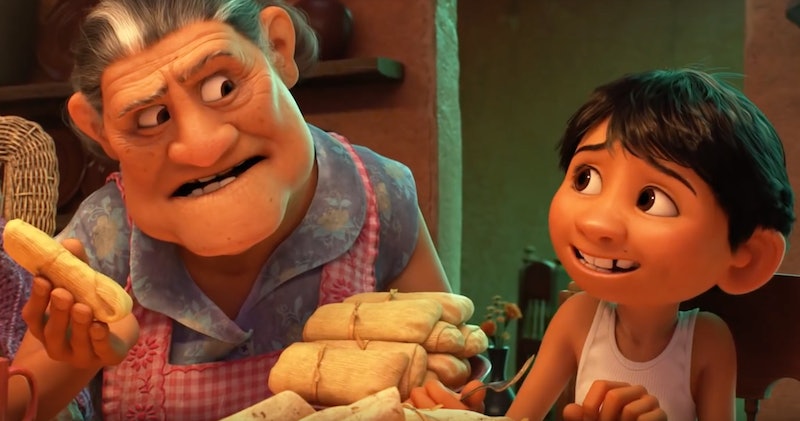 The newest Pixar movie, Coco, hits theaters on Nov. 22, and it's not a film that you're going to want to sleep on. The movie is a beautiful story about a 12-year-old boy in Mexico, Miguel, who visits his ancestors after a Día de los Muertos goes awry. Everything about Miguel's visit to the land of the dead is enchanting, but perhaps nothing is as impressive as the Coco voice cast, which is filled to the brim with A-list celebrities.

And in addition to those stars are several actors on the rise, all of whom help make the movie a real treat to watch. Even though it might sound like it has the plot of a horror film, Coco actually tells a seriously heartwarming tale. After spending years idolizing the man he quickly realizes is his great-grandfather, a musician, Miguel gets the chance to meet him in the land of his ancestors when he accidentally crosses over. As you can imagine, the fantasy land he visits is filled with magic — but also more than a few skeletons. Considering that the movie's vocal cast has great comedians on the roster, you can probably guess that it's really funny, too. Here's a roundup of who stars in the film:

Coco is Gonzalez's feature-length film debut, and at only 12 years old, he's destined for greatness. Here's his character:

You've probably seen García Bernal in movies like The Motorcycle Diaries and Neruda, which both chronicle important Latin American figures. He's also starred in the show Mozart in the Jungle, and now he plays a skeleton who accompanies Miguel on his adventure. Here's what Héctor looks like:

After starring on Bravo's Girlfriend's Guide to Divorce, Ubach's voice hits the big-screen as Mamá Imelda, Miguel's great-great-grandmother. This is Mama Imelda in the flesh — erm, make that bones:

Yes, as in Eric Matthews from Miss Congeniality. Bratt voiced Eduardo in Despicable Me 2, also, so he's got this whole voice-actor thing down. Here is the famous Ernesto de la Cruz:

You might recognize her as Lupita from Weeds, and before that, House of Payne. In Coco, Victor voices the fierce grandmother.

Yes, as in Jane Gloriana Villanueva's dad. He's hilarious in Jane the Virgin, so he's bound to bring the humor as Papá. Again, Camil plays a doting father, but he couldn't be more different from Rogelio. Here's what Papá looks like:

The 83 year-old Ariel Award-winning actress from Mexico plays Miguel's great-grandmother and confidante. Take a look at the sweet character:

You might know Iglesias by his nickname, Fluffy. The standup comedian specialiazes in doing funny voices, so he was basically made for voicing an animated movie like Coco.

The cast is stacked and the storyline is awesome. With ingredients like those, Coco seems to have the recipe for success.