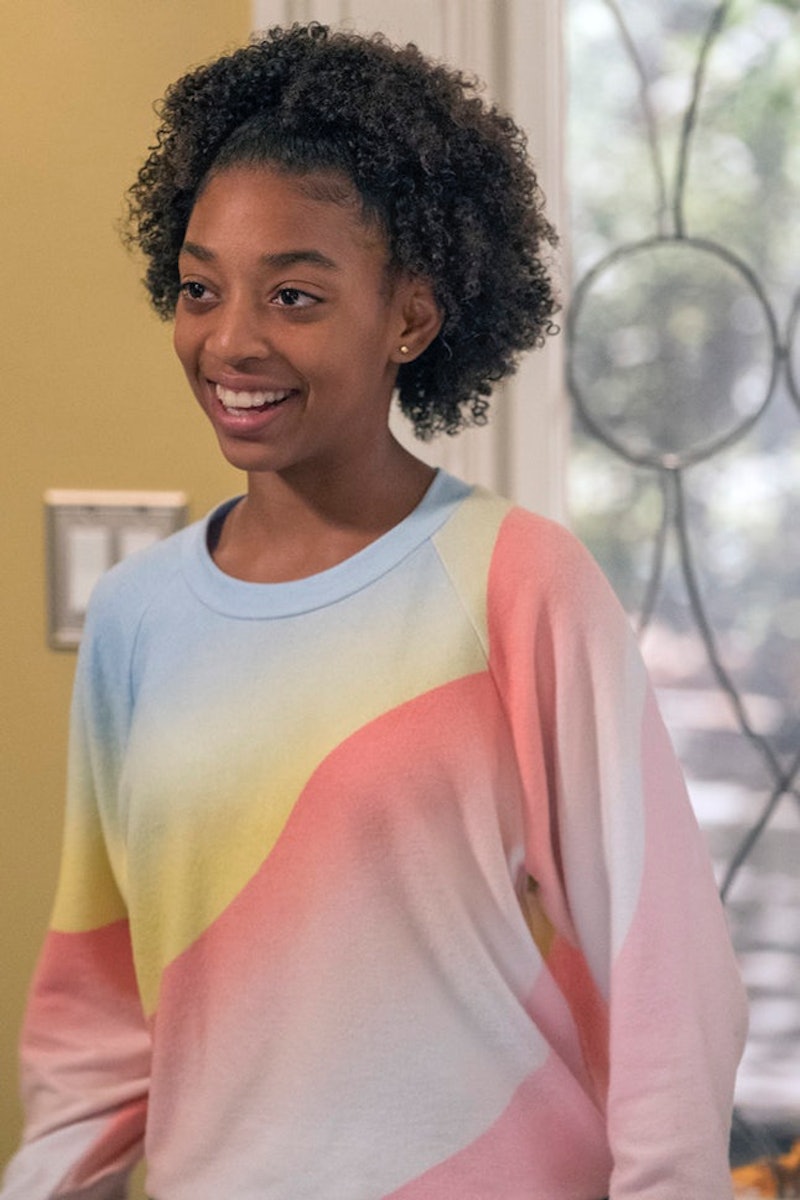 Viewers were left with plenty of cliffhangers at the conclusion of the season 3 fall finale of This Is Us on Nov. 27. But one plotline that was handled with far less fanfare than other aspects of the show — for example, what actually happened to Nicky (Michael Angarano) — was when Tess (Eris Baker) decides to come out to her parents as queer. The way the show treated Tess' experience with no real drama is truly a remarkable thing: It’s incredibly encouraging to see a TV show treat conversations about queer identities as completely ordinary, because queer identities are completely ordinary. This scene is an example of just how easily queer experiences can be represented in TV and movies without making it, you know, a big thing.

Tess actually first came out to her aunt Kate (Chrissy Metz) toward the end of the “Thanksgivings” episode. After Kate says, “Pretty soon you’re gonna have your first kiss. And your first boyfriend," Tess softly responds, “Or … girlfriend." This Is Us handles this beautifully, says Refinery29, with Kate simply responding “or girlfriend” and leaving it at that. Kate doesn't ask any questions, she doesn't confront Tess, and she hardly even reacts. Kate models a reaction that creates a safe space where there's no room for shame. Kate isn't shocked because there's no reason to be shocked. Her reaction tells Tess that it's perfectly OK for Tess to be attracted to whomever feels right to her.

In the season finale, Tess timidly approaches her parents Beth (Susan Kelechi Watson) and Randall (Sterling K. Brown) in the kitchen and tells them she’s been feeling uncomfortable. Her stomach has been feeling sick, and she just doesn’t want to keep any secrets from them anymore. She says other girls have been interested in boys and have started to have boyfriends, but she doesn’t think she wants one. Randall makes the clichéd dad-response that he’d prefer she doesn’t have any boyfriends for a long time. But Tess bravely plows on, and before Randall or Beth can say anything else, Tess tells them she doesn’t want a boyfriend because she thinks she might like girls.

Everyone’s coming out experience is different, but it’s not unusual for it to be a scary experience, because you never know how your family is going to react, no matter how supportive they may be otherwise. Tess's experience is no different. She’s clearly riddled with anxiety over how her parents are going to react to the news, but Tess tells her parents she doesn’t want to make this a “big thing.” (Straight people never have to "come out" to anyone, so why do queer people have to make it a thing themselves?)

At first, Beth and Randall looked completely shocked, a reaction that, unfortunately, plays into the "dramatic coming out" trope pop culture loves to roll out. But Beth recovers quickly, gathers her daughter up in her arms, and tells her that she and her father are two people who love her and that they won't make it “a thing.” And that was it. Tess tells them she doesn't want to talk about it anymore, so she goes back up to her room.

The parents make one comment about it being a bit of a surprise, then they move on to discussing Randall’s political campaign. That might seem like a minor point, but it’s a major detail that shows through omission that a person’s coming out is nothing to make a big deal about.

And that's really where the conversation on queerness needs to get in pop culture: let's stop making it into a thing. When movies and TV shows simply cast queer people and include queer characters in everyday roles, queerness stops being "a thing" that needs to be discussed, and is simply a part of life.

As positive as this depiction of a coming out experience is, it’s crucial to note that this isn’t everyone’s experience. In fact, 78 percent of LGBTQ youth aren’t even out to their families because they hear family members make negative comments about LGBTQ people, according to the Human Rights Campaign (HRC). For those who have come out to their families, says the HRC, 48 percent say their families make them feel bad for being LGBTQ.

That's why Grandma Rebecca’s (Mandy Moore) conversations with Tess during the episode urging her to come out to her parents felt at odds with how the episode ultimate portrayed the experience.Rebecca tells Tess that bottling up her own emotions made her physically ill, and she doesn’t want that for Tess. While Rebecca’s intentions are to help her granddaughter deal with some really complicated emotions, no one should ever be pressured to come out before they’re ready.

Regardless, it's so vital to see coming out experiences like Tess' normalized in mainstream media. Seeing more queer representation in TV and movies shows the world LGBTQ people are just that: people. There’s no need for some major “coming out” episode where everyone sits down and has some long-winded conversation about what it means to be queer. Because normalizing the conversation on TV can make it that much easier for real people, too.