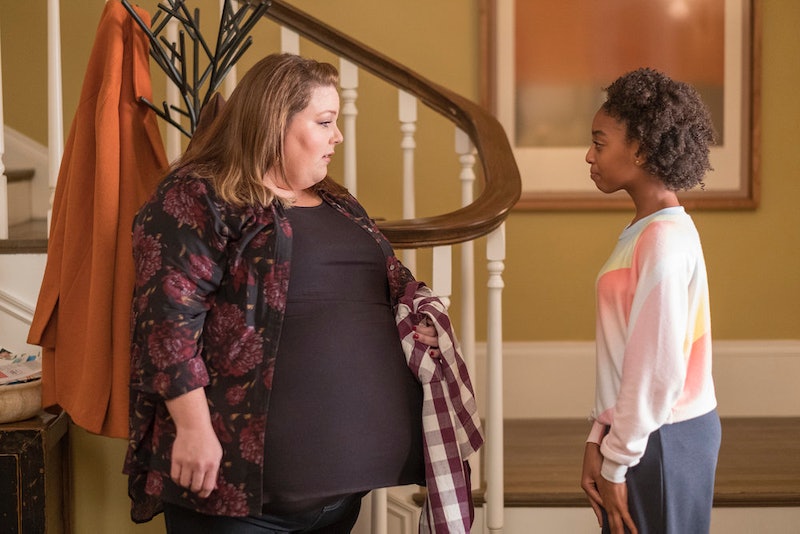 Jack Pearson was the magic man in the Pearson household, and his death left not only a huge hole in the makeup of the family but also a void as to who would be the cheerleader, the maker of special things, the one to fix it all. Each Pearson kid has had their problems in the wake of Jack’s death, but it seems like Kate is going to be the one to fill the role that Jack left. The first evidence? Kate’s talk with Tess on This Is Us was the one-on-one family time we all wish we could get at Thanksgiving.

Randall is the only Pearson with children right now, and because Kate and Kevin live on another coast, we don’t frequently see either of them interact with their nieces. But when Kate and Toby are tasked with making Thanksgiving dinner at Randall's house and Tess stays home alone with them, it sets the stage to see what Kate can really do — and how far she’s come. Her parents, Deja, and little sister are headed to a homeless shelter in Philly to volunteer in the name of Randall's political campaign, but Tess feels sick and stays behind.

The reason why Tess feels sick is because she just got her first period, and boy, is she embarrassed when Toby walks in on her in the bathroom riffling through a cabinet for a box of her mom's pads and tampons. For a 12-year-old girl, that’s a particular kind of horror. (We’ve all been there.) But not only did Kate swoop in, check on Tess, and make her feel better about the situation with her own embarrassing menarche story, she absorbed, without surprise or judgment, one more new fact about her eldest niece — that she might be gay.

Kate told Tess that she could always come to her, if not her mom, about anything, including first kisses and first boyfriends. Tess looked relieved to add, hesitantly, “Or girlfriends?” Kate obviously didn’t expect to hear such a confession, especially because, from where this viewer sits, Kate and Tess don’t seem that close, but Kate rolled with it and simply said, “Yes, or girlfriends.” This is a new development for the family, but Tess trusts Kate with the secret. She hasn’t even told her parents yet, and that’s the Jack Pearson magic I was talking about. Jack could offer the perfect talk or reaction or moment to make a worry-wart feel at ease, and that’s just what Kate did here. Now, these two have a bonding moment to recollect, and Tess knows that she can go to Kate for whatever she needs.

It’s a far cry from the "damaged" Kate that viewers met in Season 1 of This Is Us. In slowly being able to let go of her hang ups and guilt surrounding her father’s death, Kate is filling that Jack role. His death wasn’t her fault, and the more that she realizes that, the more she opens up and moves from sullen, depressed teen to emotionally realized adult woman who has it all together. Maybe her relationship with Toby has changed her or maybe it's because they're about to start a family. Whatever it is, it's working for Kate.

Right now, Kate is the one who is keeping the Pearsons together. Kevin is in Vietnam with Zoe. Randall and Beth are having their own problems because of his campaign. Rebecca and Miguel are sitting through a horrific dinner with Miguel’s family. Toby is trying to get out of his depression. Kate is holding them all up, and it’s a role that she seems to relish.