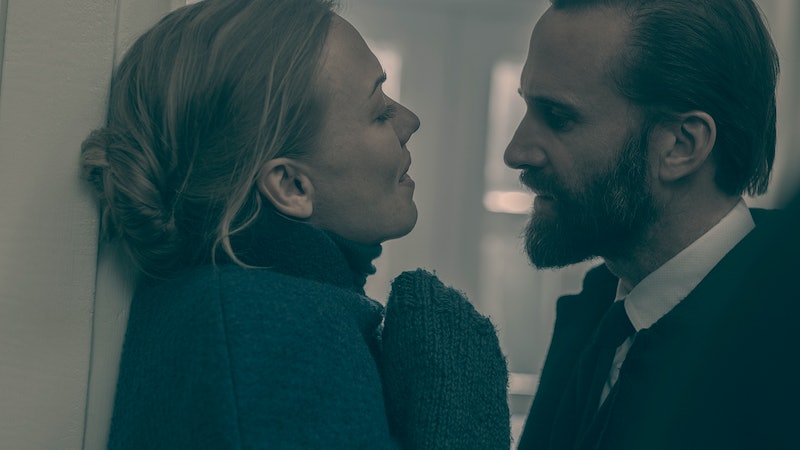 The conflict between Fred and Serena Waterford on The Handmaid's Tale has become compelling in and of itself. As two of the central villains in the Hulu drama, their dynamic in this sexist society provides food for thought as it captures the show's biggest concepts. This week, Fred expressed his true feelings about Serena on The Handmaid's Tale, and his oppressive nature was laid bare for both Serena and June to clearly see.

While searching for June, who has gone missing after Fred sent her and Nick to visit June's daughter Hannah, the couple have an intense fight as June, hidden, watches from above. The argument is raw, dropping all of the civil Gilead pretenses they maintain when they're in public, and reveals so much about their true characters — both of them.

Serena admits that she was basically complicit in this new world order just because she wants a baby. She also makes sure her husband knows that the father of June's baby is Nick. She tells Fred that she has nothing now, and that his one-sided attachment to their handmaid has ruined their hope for a future or family. As for Fred, he reveals that he was actually obtuse enough to think that June would thank him for letting her see her daughter, meaning he didn't even give any thought to how painful it would be for her to say goodbye to Hannah again.

Fred Waterford is clearly sexist; this is not new. He was instrumental in creating a society that takes basic human rights away from women, infantilizes womanhood, and ritualizes rape. As June saw at Jezebel's when Fred asked her and Moira to kiss, he only opposes homosexuality when it isn't being displayed expressly for his own titillation. Fred and Serena seemed, at least on the surface, to be equal partners before Gilead; now, as he proved recently, Fred will whip his wife for disobeying him.

Still, one of the clearest indications of his toxic masculinity comes out of their fight in Episode 11. "When did you become such a bitch?" he spits at Serena after she calls him and his actions stupid — and there it is. Finally. Sure, they're in the middle of a fight, but that word choice is revealing. Commander Waterford could pervert a fertility crisis, a governmental coup, "traditional" values, and Christian scripture in order to justify his and Gilead's actions, but at the end of the day he's just another run-of-the-mill sexist who hates powerful women.

There's no such thing as well-meaning or righteous misogyny. Whatever guise it's under, call a spade a spade. In our society, sexism sometimes manifests as a hero complex: the idea that women need to be protected from the evils of the world. This is the idea behind, for example, walking female friends home so they won't get attacked. But sometimes, "respecting" women becomes a kind of one-sided worship instead of honest respect.

Most women can probably think of at least one man in their lives who claimed to respect women but still ultimately called a woman a bitch. The terms can vary: crazy, whiny, shrill, not that kind of girl, needy, unladylike, hormonal, intimidating, or much worse. Men like Fred Waterford make The Handmaid's Tale feel less and less like a fictional dystopia with every episode. Fred can't hide behind a Bible verse after calling his wife a bitch, though he might try.

Serena Joy can't dress up sexism, either. Her internalized misogyny is more complicated than her husband's, but it still exists and it has become her downfall. In the beginning, she meant well by suggesting women focus on the family in order to address a health/fertility crisis. But after sacrificing women's rights in order to achieve a singular goal, she has nothing to show for it. Life as a submissive housewife has left her bored and feeling unfulfilled. Even if she seemingly always knew that the handmaid system would never work (remember her reaction to their first handmaid's suicide), she is still complicit in it.

As a thought experiment, it's interesting to look at the implications of what would happen if sexists had their way in modern society — not only how horrific and violent that society would be, but in how easily it breaks down under logic or scrutiny. Sometimes The Handmaid's Tale can bog audiences down with misery, but conflicts like the one between the Waterfords tackle a more everyday kind of toxic masculinity, and that's just as important.