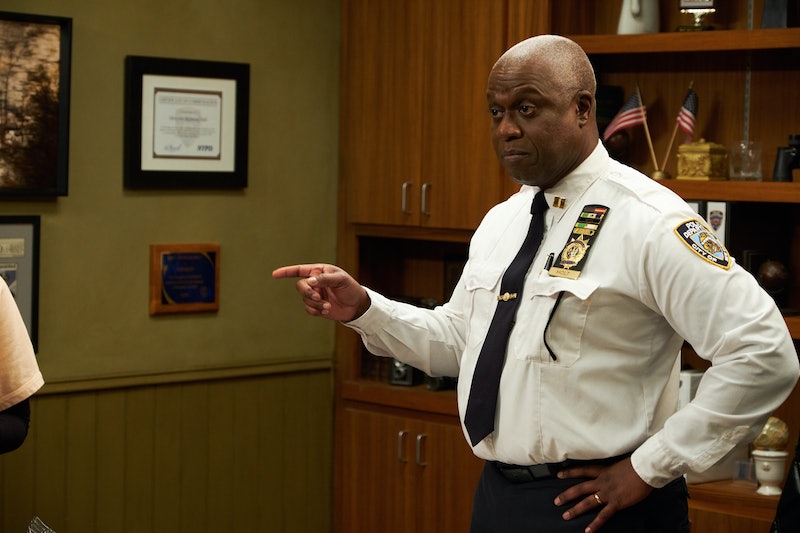 Spoilers for the "White Whale" episode of Brooklyn Nine-Nine' ahead. Raymond Holt's career could jump to new heights on Brooklyn Nine-Nine, if he succeeds in his bit for police commissioner of the NYPD. But in the "White Whale" episode of Brooklyn Nine-Nine, it's beginning to appear as though the odds are not in his favor. A visit from Holt's rival candidate Olivia Crawford (Alison Tolman), reveals that the nominating committee will be making their recommendation to the mayor — and it's another person entirely. Holt and Olivia share a moment of understanding when Brooklyn Nine-Nine explores how marginalized people are forced to compete against each other for opportunities that often end up going to straight, white cis men anyway.

Olivia tells Holt that the nominating committee is backing the generically named John Kelly for the position of police commissioner, and he's the status quo in every way. Apparently, half of the committee supports John Kelly, while the other half is split between supporting Olivia, who would be the first female commissioner, and Raymond, who would be the first openly gay commissioner, who's also black. The rivalry between the two is back on, but with the understanding that the winner of this fight still has to go up against a man who looks more like every NYPD police commissioner in the show's version of New York City history than either of them and has the support of the nominating committee.

After hearing about Holt's predicament, Charles and Gina suggest that they start a whisper campaign on Holt's behalf, offering to spread rumors about Olivia to try and disparage her. For a moment it seems as though that is exactly what the episode will turn into — Holt and Olivia insulting each other and tearing each other down while the straight white man gets an easy road to the finish line – but Holt quickly shuts the idea down, and the episode doesn't entertain any further the idea of following through on Gina and Charles' plan. While a whisper campaign would be a funny addition to any other plot, the show seems to recognize that this topic is not the time or the place for typical Nine-Nine antics.

Instead, in a turn of events reminiscent of "The Gift Of The Magi," the two rivals meet and reveal that they each sent in a concession letter, withdrawing themselves for the race so that they could support the other person. By sending in their letters, they've effectively left John Kelly without an opponent. Luckily, Holt only writes physical letters, not e-mails, so they are able to intercept his before the necessary parties receive it, meaning that he is still in the race. While Olivia is disappointed to no longer be in the running, she recognizes that the two ultimately want the same thing — to disrupt the legacy of straight, white men dictating the functions of the NYPD and to bring some much needed change to the department.

While the conflict could have devolved into a conversation about whose voice is more valuable in the position of NYPD commissioner, the show acknowledges that both of these candidates are equally qualified and would bring a fresh perspective. As disappointing as it is to see Olivia let go of her own goal, she seems aware that Holt would be just as dedicated as she would to ensuring that the NYPD looks like less of a boys club by the end of his tenure. There's a positive message to be found as they two combine forces and focus on doing what it takes to advance an institution that sorely needs an overhaul. They may not be fans of one other, but Olivia and Holt can both see that in this instance, a rising tide really does lift all boats.