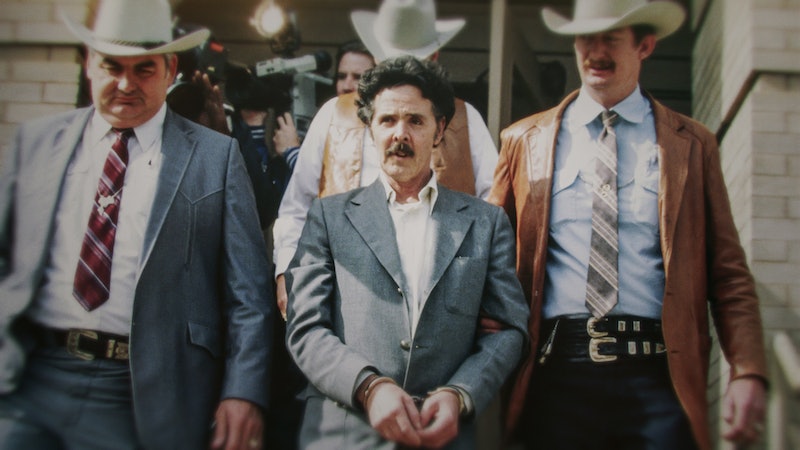 When it comes to true crime shows, there's usually one thread that ties them all together: the admitted killer in question is usually guilty. But what if that wasn't always the case? What if their confessions just didn't add up? Questions like that are what make the trailer for Netflix's new docuseries The Confession Killer unlike any other true crime story you've seen before. Because while the police may have gotten the confession they were looking for, that doesn't necessarily mean the killer was caught.

The series centers around the life of alleged serial killer Henry Lee Lucas, who confessed to hundreds of murders during the early '80s. But instead of bringing all of these unsolved cases to a close, Lucas' account of things ultimately introduced more questions than answers. Despite the fact that Lucas was able to sketch portraits of his victims and describe brutal details about the killings, police were never able to find direct evidence linking him to the crime scenes. So what first felt like a triumph of justice soon morphed into a confusing hotbed of uncertainty. Discrepancies in Lucas’ timeline and DNA testing started to contradict his story, forcing investigators to rethink everything they thought they knew about these killings and the person who committed them.

According to the official synopsis provided to Bustle, The Confession Killer — set to debut on Dec. 6 — is made up of a five-part installment and seeks to explore "how the man once called America’s most prolific serial killer was really a complex figure entangled with a flawed justice system."

The trailer goes on to detail how Lucas was treated almost like a celebrity while helping to close a vast array of unsolved cases for the police, which may help to explain why he was so willing to take credit for so many crimes. However, that doesn't mean that he isn't guilty of murder.

Lucas was found guilty and sent to prison for murdering his mother back in 1960 and just after making parole in 1970, he found himself in jail for the attempted kidnapping of a 15-year-old girl. He was released in 1975 only to find himself arrested again in 1983 for unlawful possession of a firearm. It was then that Lucas confessed to killing two people: a young woman believed to be his girlfriend and an older woman they had been staying with at the time. From there, his confessions to other murders only continued to grow, making it difficult to know which crimes he was actually guilty of committing.

Lucas died in 2001 of a heart attack and, unfortunately, the truth died with him. But perhaps the Netflix series will inspire law enforcement to re-examine those old cases and give the victims' families the closure they deserve. It wouldn't be the first time a Netflix true crime series inspired change in the real world.