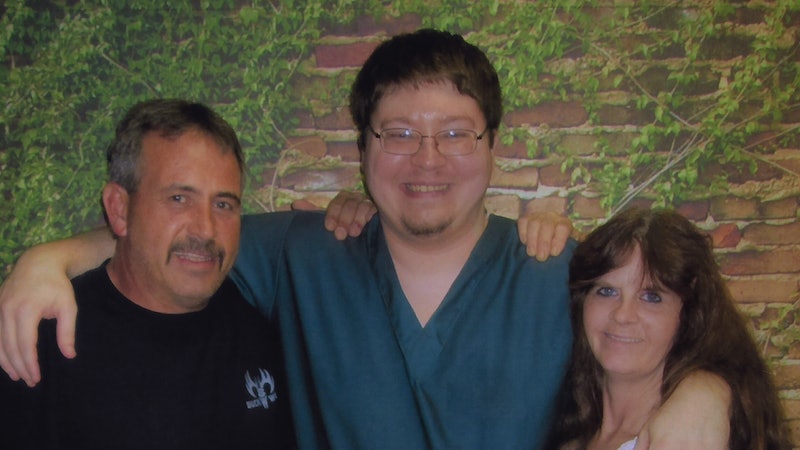 Attorney Laura Nirider announced on Oct. 2 that Making a Murderer subject Brendan Dassey is requesting clemency from Wisconsin's new Democratic governor, as reported by CBS News. "We're filing a petition for executive clemency with Governor Tony Evers of Wisconsin," Dassey's lawyer Nirider told the news outlet. "This is his best shot, and the moment is now. The moment is now for Brendan to come home." Executive clemency refers to the power of a president or governor to pardon a person convicted of a crime or shorten the sentence to be served, per Cornell Law School's website. (Bustle reached out to Dassey's lawyer and Gov. Evers for further comment, but did not immediately hear back.)

The 29-year-old Dassey is asking for a pardon, which would result in his release from prison, as well as a shortening of his remaining sentence, according to CBS News. Dassey has so far spent 13 years in prison after he confessed to aiding his uncle, Steven Avery, in the 2005 murder of photographer Teresa Halbach. Both Dassey and Avery were sentenced to life in prison in 2007, after they were convicted of Halbach's murder. As shown in the 2016 Netflix true crime docuseries, critics of Dassey's conviction, as well as his lawyers, claim the then-16-year-old was allegedly coerced into a false confession, which investigators allegedly obtained without a lawyer or parent present.

Dassey recalled his 2006 confession, claiming that investigators "got into [his] head," during a new episode of Jason Flom's Wrongful Conviction podcast published on Oct. 2. "I just wanted it all over with, so I said whatever they wanted to hear, you know? . . . I thought, anything I can do to help them, you know, I would," Dassey told Flom in his first interview since going to prison.

"When Brendan Dassey was in special education, he was in 10th grade, he required an aide to sit next to him in the classroom to help him understand the teachers' spoken sentences…" Nirider explained in her Oct. 2 interview with CBS. "Then shift him into the interrogation room where he was barraged with 1,500 questions over 3.5 hours … You don't have to be a lawyer to understand how an interrogation like that would overwhelm someone like Brendan Dassey."

Dassey's clemency application reportedly included a handwritten note to Evers in which he congratulated the governor, who took office in January, on his election, per NBC News. Dassey also listed things he enjoys including Pokémon and hamburgers and drew a pair of hearts with the word "hugs" in one and "love" in the other. "I am writing to ask for a pardon because I am innocent and want to go home," Dassey wrote in the letter, according to NBC.

Evers re-started Wisconsin's pardons board this year after his Republican predecessor, former governor Scott Walker ended it in 2011. The Washington Post reported, however, that to be considered for a pardon, applicants must have completed their prison sentences. Anyone not meeting that criteria will be rejected as ineligible with no review, according to the newspaper.

Nirider told reporters at an Oct. 2 news conference in Wisconsin that she hopes Evers will make an exception for Dassey. “What we're hoping to do is to take this moment to ask the governor to hold off, to look at this case as a perfect example for that kind of relief,” she said during the press conference, per The Washington Post. "We look forward to working with Governor Evers to help him understand this case, to help him see that it's time to bring Brendan home."

Following years of appeals and legal battles, an order from the governor seems to be one of Dassey's few current option for release, according to Nirider. In 2016, a judge overturned Dassey's conviction on murder and sexual assault charges and ordered he be freed from prison, according to The New York Times. Days before his scheduled release, however, an appeals court blocked the judges decision and mandated Dassey remain in prison. The following year in 2017, a federal appeals court upheld Dassey's conviction. After the United States Supreme Court declined to hear Dassey's appeal in 2018, his legal options have remained limited.

Dassey's uncle Avery is currently serving a life sentence for the crime, according to NBC Chicago, and his lawyer Kathleen Zellner has filed several appeals in court. On Aug. 8, 2019, a Wisconsin judge denied Avery's motion to receive a new trial, as reported by NBC26 Green Bay. "The court finds that the defendant has failed to meet his burden to establish that Wis. Stats. 968.205 was violated or his constitutional rights were violated," the court record stated, according to the NBC station. The Guardian reported on Sept. 28 that Avery and Zellner plan to file an appeal for post-conviction relief on Monday, Oct. 14.

During Flom's podcast, Dassey asked his supporters to "keep fighting for him for me." For now, though, his fate seems to be in the hands of Governor Evers.

More like this
Police Never Found Enough Evidence To Charge Sharon Marshall’s Killer
By Brad Witter
Chrishell Stause & G Flip Have “No Rules Or Regulations” In Their Relationship
By Brad Witter
Bachelor Nation's Blake Horstmann Is Dating 'Love Is Blind' Star Giannina Gibelli
By Jake Viswanath and Radhika Menon
Move Over, 'Sunset'! The Drama-Filled Trailer For 'Selling The OC' Is Here
By Nola Ojomu
Get Even More From Bustle — Sign Up For The Newsletter