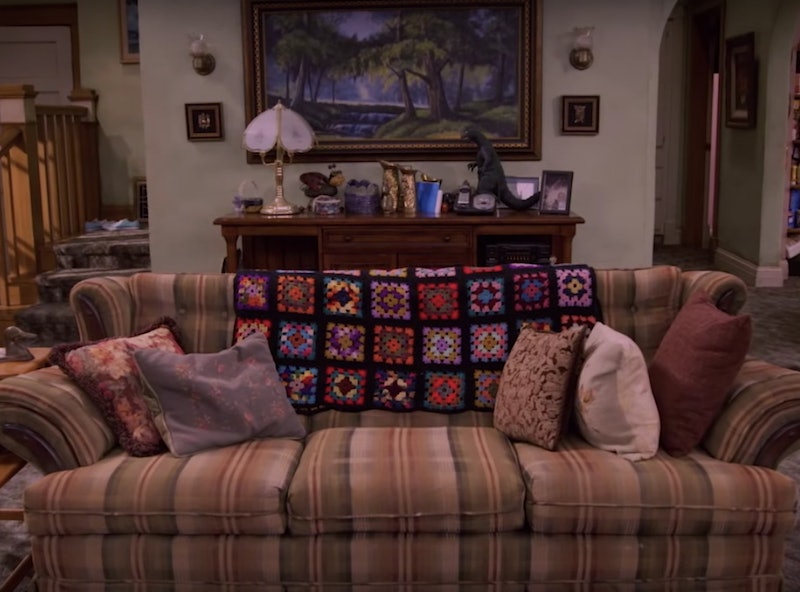 The Roseanne spinoff series is set to premiere on Oct. 6 and ABC released the first glimpses at the new sitcom on Friday, Aug. 31. The teaser trailer for The Conners shows how the TV family will be moving on without its titular character and star — the setting and look will still be familiar to fans of the original and its revival series earlier this year.

The song in The Conners trailer, "Anticipation" by Carly Simon begins as the camera moves in on a familiar sight: the couch in the sitcom family's living room. Five seconds in, the text "What's next?" appears on-screen in a font definitely known to TV fans — it's the same font as the Roseanne logo. Soon, the screen goes black and the font appears again, with The Conners in the familiar typeface.

ABC also released the first photo from the set of The Conners on Aug. 31 as the series began production. In the photo, the cast members are sitting at the famous dinner table in the Conners' kitchen. But you can tell this isn't a scene, but a behind-the-scenes candid — there are scripts, pens, and highlighters on the table. It looks all so familiar, but different.

While the logo and the living room may be the same, the series itself will be missing Roseanne Barr, who led both the original series and the rebooted series earlier this year. ABC canceled the Roseanne reboot in May 2018 after Barr posted a racist tweet about Valerie Jarrett, who was an adviser to President Obama. Barr deleted the tweet and apologized. Regarding the show's cancellation, ABC Entertainment president Channing Dungey issued the following statement to Bustle:

A few weeks later in June 2018, ABC announced that the network was moving forward with a Roseanne spinoff called The Conners. An ABC press release detailed that Barr would have no involvement in the series and Barr issued a statement to Bustle earlier this year confirming that. Barr's statement read:

"I regret the circumstances that have caused me to be removed from 'Roseanne.' I agreed to the settlement in order that 200 jobs of beloved cast and crew could be saved, and I wish the best for everyone involved."

The ABC press release also dropped a hint about how the spinoff will explain the absence of Roseanne (the character). The show's official description read:

After a sudden turn of events, the Conners are forced to face the daily struggles of life in Lanford in a way they never have before. This iconic family – Dan, Jackie, Darlene, Becky and D.J. – grapples with parenthood, dating, an unexpected pregnancy, financial pressures, aging and in-laws in working-class America. Through it all, the fights, the coupon cutting, the hand-me-downs, the breakdowns – with love, humor and perseverance, the family prevails.

Last week, fans got a sense of what that "sudden turn of events" might be. Goodman revealed what might be Roseanne's fate to the U.K. publication Sunday Times. "It's an unknown. I guess he'll be mopey and sad because his wife's dead," Goodman told the Times of his character, Dan Conner. (ABC declined to comment to Bustle regarding Goodman's quote.)

Though it sounds like the family may be going through a new situation, it seems like the set and logo of The Conners will definitely be familiar.