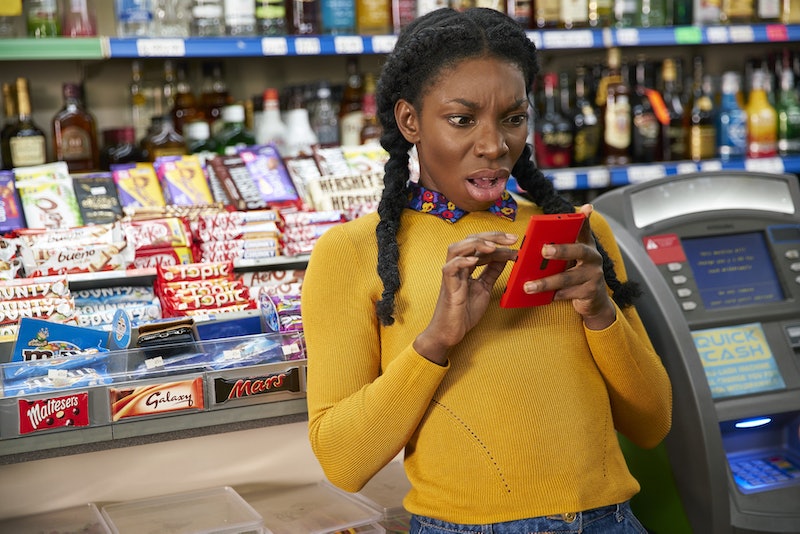 Mark Johnson/Netflix
By Kayla Hawkins
May 2, 2017

Tracey's virginity has been the thread holding Chewing Gum together since the pilot, ever since she decided to put her religious background aside and become sexually active. So, when Tracey lost her virginity in the Chewing Gum Season 2 finale, of course it was going to be in the show's characteristically extreme style. However, Chewing Gum may have gone slightly too far for some. The decision to make Tracey have sex with a 16 year-old was a... bizarre success — but really only when compared with how the topic of female-to-male statutory rape has been treated on other series before.

For example, a highly criticized Saturday Night Live sketch from Ronda Rousey 's episode in early 2016 had Pete Davidson play a student who's praised when everyone finds out that his high school teacher had sex with him. Even worse, it was a recurring sketch that had already faced the same criticism in 2015, with Davidson and Cecily Strong in the same roles. Another highly criticized example happened on Riverdale, with Archie and Miss Grundy's hookup accused of romanticizing the relationship rather than treating it like what it is: a serious ethical and legal violation.

Chewing Gum certainly didn't fall prey to the same trap. First of all, Tracey met the teen in a book club and genuinely wasn't aware that he was much younger than her — which is significantly different than a teacher knowingly hooking up with one of their students. And, as soon as Tracey realized the truth, she immediately attempted to turn herself in to the police. As it turns out, at least in London where she lives, she wasn't actually breaking the law: having sex with 16 year olds is just inadvisable, not illegal. But the fact that the legal and ethical repercussions were actually discussed and not swept aside or glossed over is unique.

That's not going to stop me from cringing, but there's an unambiguously fantastic silver lining about how Tracey lost her virginity: the show didn't totally change itself to make sex the most special moment of her life. In fact, her last-minute kiss with Connor — despite the continued existence of his new girlfriend, Emma — was far more emotionally meaningful.

On top of that, Tracey arrived at the decision to have sex almost impulsively and finally had some open communication with a partner. The show also didn't shy away from all the weirdness that can happen during a first sexual encounter, from Tracey's confusion at the mechanics of what's possible to her unexpected tears to its overall awkwardness and abrupt ending.

Ultimately, that's what saves Chewing Gum from faltering with this weird storyline. Tracey's never been able to achieve a new milestone without getting there in the strangest way possible. And, as she finally moves on from adolescence, it's almost fitting that it happens with an actual adolescent. Gross for those of us who live outside of London, but almost fitting.

The series could have chosen a less problematic way to it to happen, that's true. But, considering that most shows are seemingly unable to understand that an adult and a teen having sex is not cool, awesome, or a teenage boy's ultimate fantasy, Chewing Gum at the very least managed to explore how uncomfortable this situation would really be — without sacrificing any of the cringeworthy laughs the show is known for.