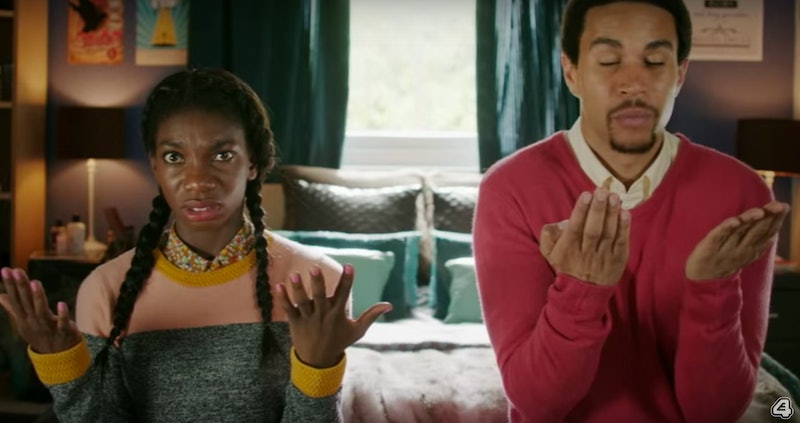 Michaela Coel isn't like anyone else on TV. She is funny, foul-mouthed, and has the worst poker face on the small screen when it comes to hiding her feels — which actually helps, since much of her debut show, Chewing Gum, charts the protagonist's battle between her Christian upbringing and her very earthly desires more often via her conspiratorial glances at the audience than through her words. So thank goodness for the Chewing Gum Season 2 trailer, which gives us some very concrete evidence that your next favorite show will be back.

If you're not yet a Chewing Gum devotee, give me a moment to convince you of the gospel of Coel. As a British viewer myself, it's easy for me to see why audiences at home are so bowled over by the show, but why Americans might find it a tricky watch at first. Still, give it a chance, because like much of the solid British comedy that pre-dates it (The Office, Peep Show), Chewing Gum is all about taking comedic pleasure in moments of intense embarrassment. Whether Tracey is trying to make picking food out of her bra sexy, or dealing with her nosebleeds that come on when she's sexually aroused, Chewing Gum is furiously funny because it doesn't shy away from the terribly, cringy moments that are part of inhabiting a human body.

Much of the beauty of Chewing Gum is Coel's ability to juggle contradictions. Tracey lives on a council estate that isn't the hopeless (and let's be real, not un-clichéd) terrain of something like the 2004 British film Bullet Boy, but shows a community thriving with life and fun. And while Tracey is a virgin and a Christian, she's probably the character on Chewing Gum who is most excited about sex.

So if you're on the hunt for something that swerves clichés and embraces the rich, sweaty tapestry of being a person who has both desires and beliefs, get started on your Netflix marathon. You'll laugh, you'll cringe, you might even weep a little (if only in embarrassment) — but most of all, you won't be able to wait for Season 2.