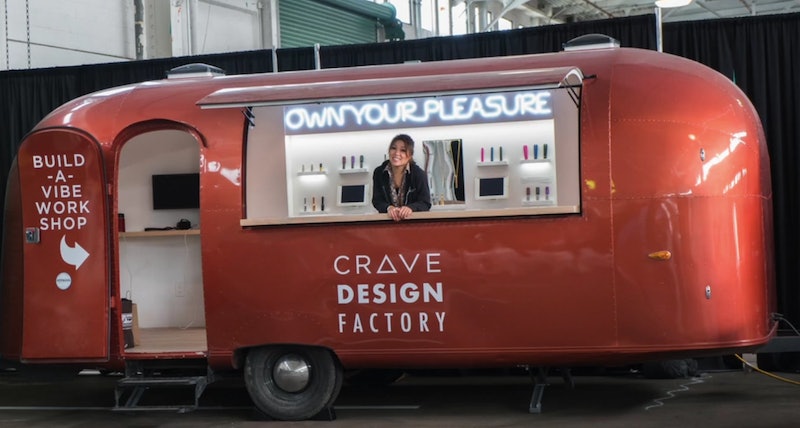 I found the Crave team tucked into the “adult section” of the World’s Fair Nano, with fellow sextech company Lioness on one side and a company that does something with cannabis on the other. (I’ll admit: I didn’t investigate. I was there for the sex toys.) Part retail store, part design studio, and part build-a-vibe workshop, the Crave Airstream was staffed by co-founder Ti Chang in a white jumpsuit with Chief Pleasure Officer embroidered on the back. CEO and co-founder Michael Topolovac gave me a tour of the small, efficiently-appointed space, pointing out Chang’s future design corner and the Build-A-Vibe section.

The plan is for Chang to take the Airstream on the road over the coming year, starting with cities on the West Coast. She’s going to hit up festivals, campuses, and anywhere else that’s interested in open, honest conversations about sex and pleasure.

The idea for the Build-A-Vibe tour came from Build-A-Vibe workshops that Chang and her team hosted first at their factory in San Francisco and then at more public spaces, like San Francisco’s Academy of Sciences and SXSW. The response to those individual workshops got them thinking: Maybe this is something we could expand on.

“It created a really open atmosphere, where people felt like they could really talk about these things without any stigma,” Chang tells Bustle. “People don’t often have the opportunity to talk about vibrators and sex in a warm, open environment. Having this experience allows everyone to come in, build their own. They don’t feel like it’s awkward.”

And while I’m not someone who ever feels awkward talking about sex or vibrators, I decided to test out the Build-A-Vibe experience myself. I sat down at one of four stools in front of a little kit that contained pieces of Crave’s Duet Pro vibrator. Another woman sat to my right, while her boyfriend sat just behind her and took photos. Chang walked us through the process, showing us how to squish the rubbery part down, waterproof the entire device, and put everything together, piece-by-piece. At the end, Chang showed us the URL where we can go and set the vibration patterns, making the Duet Pro truly customizable.

Unlike a sausage factory, seeing how Crave toys are made did not turn me off from them. In fact, it did just the opposite. It was great to witness firsthand how the Crave design aesthetic penetrates all aspects of the culture, from Chang and her team’s adorable jumpsuits to the neon sign declaring OWN YOUR PLEASURE to the slick white interior of the vintage Airstream. I also loved learning that, while pretty and powerful, Crave toys are impressively simple. And isn’t that one of the main tenets of great design?

Chang will be starting her tour with West Coast cities, but the goal is take the Build-A-Vibe off the liberal coast and penetrate parts of the country that may be even more reluctant to have the kind of open, honest conversations about sex that Crave is all about. In order to make that happen, they’ve launched an Indiegogo campaign. So if you’re interested in seeing how the sausage is made — and making some yourself — here's your chance.