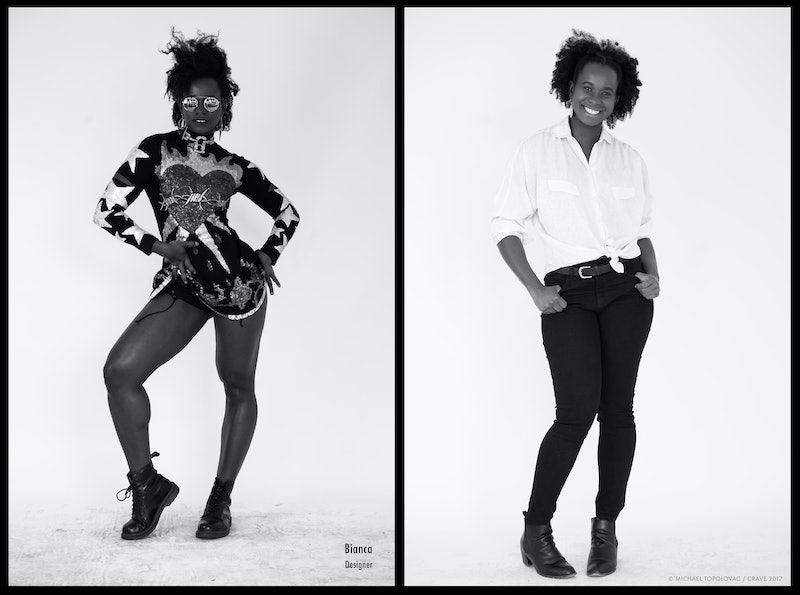 The conversations about sex and sexuality have been pretty grim lately. Important. Necessary. Potentially world-changing. But — grim. And so while our national conversation is focused on consent, rape culture, and #MeToo, I’m excited to share a sex-related story that’s about pleasure, identity, and people living out loud. The Crave Portrait Project presents two views of the same person: how they looked at the 2017 Folsom Street Fair, the world’s largest outdoor kink festival, and what they look like in their day-to-day lives.

The photos were taken during Folsom Street Fair in 2017 by Michael Topolovac, founder and CEO of the luxury sex toy brand Crave. Crave’s headquarters is on Folsom Street in San Francisco, so Topolovac invited people in to take portraits in their kinky gear. He also gathered contact info and reached out to see if people would be interested in follow up photos in their day-to-day clothing. The goal? To not only normalize kink but also to highlight some of our commonalities.

“In as much as we make products that support pleasure, more broadly we believe creating opportunities for thoughtful conversations around sex and pleasure can be a positive force,” Topolovac tells Bustle. “The project was in this spirit and a celebration of self-expression.”

Stephen, a participant in the Portrait Project and a puppy play enthusiast, agrees that Folsom is all about self-expression. This was his “sixth or seventh” year at Folsom, but his first time showing up in full puppy play gear. “It’s really just a form of expression, kind of like fashion,” Stephen tells Bustle. “It’s who you are.”

By presenting people in both their kink gear and their every day gear, the Crave Portrait Project also pushes back against stereotypes about kink and kinky people. The very first pair in the slideshow is of a man named Cameron, who rocks leather daddy gear in the image on the left and a polo shirt tucked in to neat, belted jeans on the right. He looks like he could be anyone’s (hotter-than-average) dad. That, Topolovac says, was intentional.

“I was struck by how the diversity of the images showcased more of how much we share then how different we are,” Topolovac says. “That connection, empowerment, embracing who we are, might come in different forms, but at its core, it is something that is a shared human experience.”

For participant Janny, a sex educator in the Bay Area, the Crave Portrait Project was not only a chance to show off her outfit, but also was a kinky coming out of sorts. “I come from a very traditional Chinese family,” Janny tells Bustle. “Anything sexual — even the word sex — is not allowed to be said in the house. I, though… I am who am. What a fun way to come out.”

But Janny also hopes that the Portrait Project will help dispel some of the myths about the kink community. “It’s incredible how once people really immerse themselves in the scene, how homey it can get," Janny says. “That’s one of the first ideas that I had to get out of my head. I feel like in general people see the kink community as something dark, weird, taboo, and freaky. And in a lot of ways, it might come off that way to people — I can definitely see how the way people dress might make some people uncomfortable. But I feel like, at the end of the day, the kink community is very tight knit. It is kind of like that weird little family. There are a lot of little pockets of community in the Bay and the kink community is just one of them.”

So take a little break from the news cycle and check out these seven photos of people who are not afraid to be who they are.

If you want to see more, head over to the full Crave Portrait Project and take a look.