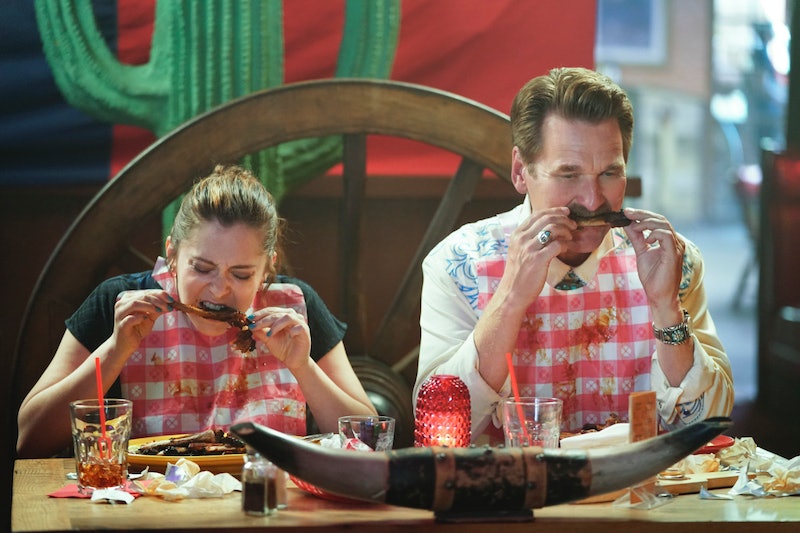 Spoilers ahead for Crazy Ex-Girlfriend Season 4, Episode 6. Everyone has been in one of those awkward car rides where neither party wants to be there. This premise is the crux of Crazy Ex-Girlfriend Season 4, Episode 6: six characters are forced to drive around with someone they're not wild about — Rebecca with Darryl, Heather with Nathaniel, and Paula with Josh, respectively. And while they all start out fake-smiling, they eventually voice their frustrations, which turns into real conversation. The episode highlights how essential communication is to friendship — even if, in order for it to happen, they have to be "trapped in a car with someone they don't want to be trapped in a car with," as their catchy song goes.

Since there's no better way to cover narrative ground on Crazy Ex-Girlfriend than with a musical number, the gang sings a Beach Boys mash-up called "Trapped in a Car," which includes parodies of "Fun, Fun, Fun," "Pet Sounds," and "Kokomo." After all, is there anything more California than singing Beach Boys-adjacent songs about driving?

"And now this person's eating corn chips — where did those come from?" Rebecca sings passive-aggressively about Darryl. "It's hard to focus on a podcast because they've started to hum," Paula adds with a smile plastered across her face. And then there's Heather, who apparently takes off her shoes while holding the wheel, which Nathaniel is understandably revolted by.

Heather finds Nathaniel broken down on the side of the road (his Uber drivers keep cancelling on him, for some reason!), so she reluctantly gives him a lift. And while they initially fight about Nathaniel's rudeness, Heather's messy car, and whatever's in that mysterious envelope that he has clutched to his chest, their conversation soon takes an authentic turn. Maybe too authentic for Heather's liking, as she's soon covered in Nathaniel's late au pair's ashes, which he was trying to scatter at the Santa Monica beach. He admits to her that, other than Rebecca, his nanny was the only one who really loved him. He also laments that he's lonely, and she suggests that he start being nicer to people.

Rebecca, meanwhile, wants to go on a fun, laid-back trip to a barbecue restaurant in Irvine, but with Valencia in New York, Heather working, and Paula "studying for the Bar" (more on that later), her usual girl gang is out of commission. Her friends warn her that Darryl gets intense fast, and since Rebecca's been in so much therapy recently, she wants to keep things light for once. However, her former boss is the only one who accepts her invitation, and he arrives at her house looking like "a small-town mayor at a 1970s rodeo," as Rebecca describes him. After all, when has Darryl done anything half-heartedly, even if it's just going on a road trip to eat ribs?

Rebecca is mature enough to communicate her needs up front, asking Darryl to avoid talking about heavy subjects. But he can't help himself and soon inquires after Rebecca's saddest childhood memory. It's only natural that Darryl would be so emotional — after all, he's only recently become the father of a newborn and gone through a serious break-up. And while they briefly fight outside the BBQ restaurant, the most troubling part of their odyssey occurs when they almost kiss at the end of the night. And while they thankfully catch themselves in time, it ironically encourages Rebecca. "The fact that I was attracted to you — it gives me hope!" she exclaims. After all, she's usually drawn towards selfish jerks, so maybe she'll start dating nice guys for once.

And then there's Paula, whose final hurdle before becoming a full-fledged lawyer is taking the Bar Exam. She's understandably terrified by the pressure and has convinced herself that she can't study without the perfect desk. And instead of using the card table they have in storage, she's found a lovely desk online that's conveniently located an hour away in San Bernardino. The lawyer-to-be signs up for a delivery service called "Bro with a Truck," and her bro turns out to be Josh. The two don't exactly get along, but since the cancellation fee is $200, Paula sucks it up. Ironically, Josh's therapy has paid off, and he ends up nailing why she's so reluctant to start studying. She reciprocates by telling him to please move out of Hector's mom's house.

So while everyone starts out this episode grumpy, terrified, and/or lonely (well, for everyone except for Josh, who seems weirdly fine with living with someone's mother!), their conversations clarify things about themselves. Heather decides to lease a new car, Nathaniel begins expressing affection (albeit very weirdly), Paula faces her studying fears, Darryl shaves his facial hair (he loves his mustache, but not in a creepy way!), Rebecca decides to start dating again, and who knows, maybe Josh will begin looking at apartments. Whatever the case, it's clear that these relationships are essential to their growth — even the ones they aren't crazy about. After all, friendships can be difficult and uncomfortable, but more often than not, they're worth the effort.