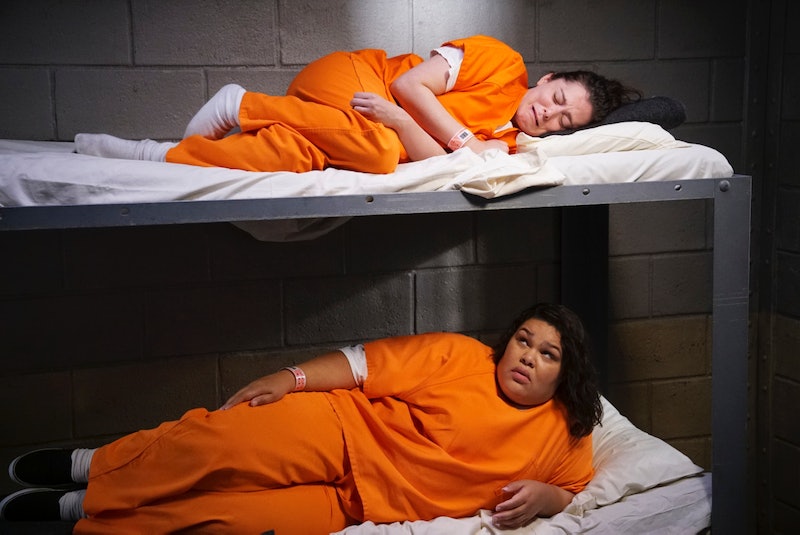 Spoilers for the Crazy Ex-Girlfriend Season 4 premiere. Rebecca Bunch is finally starting to grow up in the Crazy Ex-Girlfriend Season 4 premiere. The last time we saw her, she was pleading guilty to attempted murder against Nathaniel's legal advice. However, Rebecca decides to take responsibility for her actions, and audiences see her in jail in this episode, repeatedly saying, "I deserve this." But that's all she does, making no moves to better herself or allow her friends to help. Fortunately, after a wake-up call in prison, she begins to truly acknowledge her mistakes. In this way, she becomes an ally to her fellow inmates, who are much less privileged than the Harvard grad.

It could be so frustrating (but endlessly entertaining) to watch Rebecca make self-serving and yet ultimately self-sabotaging mistakes in the past three seasons of Crazy Ex-Girlfriend. And while her decision to go to prison was really about making herself feel better (much like Josh very briefly deciding to become a priest or Nathaniel torturing himself in the wilderness), the women she meets there give her a much-needed jolt of reality when she realizes her situation pales in comparison to theirs.

In a hilarious parody of Chicago's "Cell Block Tango," with see-through lingerie layered over their bulky orange jumpsuits, Rebecca asks her fellow inmates to tell their stories. But instead of these accounts being deeply sexy and revealing something profound about the patriarchy, their reasons for being in jail are quite straightforward and sad. Most of the ladies in this song are women of color, and Rebecca's white privilege becomes glaringly obvious as the song progresses. One inmate says that her boyfriend had meth in the glove compartment of her car, and when she got pulled over, the police found it. The next woman says she stole a sweater from the mall because the heat went out in her apartment. A white lady enters the frame and says, "I stole a sweater, too! I got two months. How long are you in for?"

Rebecca is so depressed by all of this information that she takes a few beats to collect herself after a particularly harrowing tale of an inmate accidentally killing a teenager with her car. So when an employee points out that Rebecca chose to be in jail, the women are so disgusted that they walk away, leaving her to sadly "ra-ta-ta" by herself.

"I figured out something huge," Rebecca tells Heather, Valencia, and Paula when they come to visit her. "I am privileged." This is a no-brainer to them, and to anyone who's watched the show, but it's truly a revelation to the protagonist. And when her friends reveal that Trent miraculously confessed to everything, Rebecca says she wants to stay in prison. "I came here to pay penance, and I have not done that yet!" she laments. "I did the opposite of that. I was selfish, and I tried to force my own narrative on these women and steal their stories for my own purposes." Fortunately, Heather brings her friend to her senses. "You know whatever you do in here, nothing's going to change the fact that you're a rich, white, lawyer lady who pled guilty for dramatic effect," she points out. "Kind of gross."

And Rebecca takes this newfound wisdom to heart — so much so that after she gets out of jail, Valencia forbids her to say the word "privilege." What's more, the yoga instructor tells her that she needs to stop feeling sorry for herself and actually do something about her "systemic, socioeconomic, racial, and cisgender advantages" — as Rebecca begins calling it — and stop whining.

Fortunately, Rebecca doesn't backslide by the end of the episode, as she's done so many times before. She returns to the prison as a civilian and, instead of giving the women unprompted theater notes, she decides to do something tangible with her talents and offers free legal advice. "So when I'm not forcing my opinions and entitlement on everybody else — sorry for that — I'm actually a pretty good lawyer," she tells her old theater group. "And I don't know that much about criminal cases, but I can study up." While it's important that she's learning to be a selfless person, since Rebecca is famously self-obsessed, it's also profound that she apologizes. While they were in the theater group together, she didn't listen to what the women wanted to do — which was play "Zip, Zap, Zop." Instead, she made them stage a boring musical number from South Pacific, which everyone hated.

And while, in the past, her apologies haven't necessarily meant she'll actually change (hence why Paula's been so mad at her), the premiere sets a hopeful tone that perhaps Rebecca Bunch is starting to mature. However, there's still a whole season to go, and it remains to be seen how she'll continue to deal with Nathaniel, who is just as selfish, if not moreso. Audiences also know that Greg is coming back (well, kind of), so hopefully she won't become distracted by boys like so many times before and that she'll continue to volunteer at the prison. That being said, there has to be some semblance of the old Rebecca left, because no one can do a complete 180 overnight.

After all, the situation's a lot more nuanced than that.