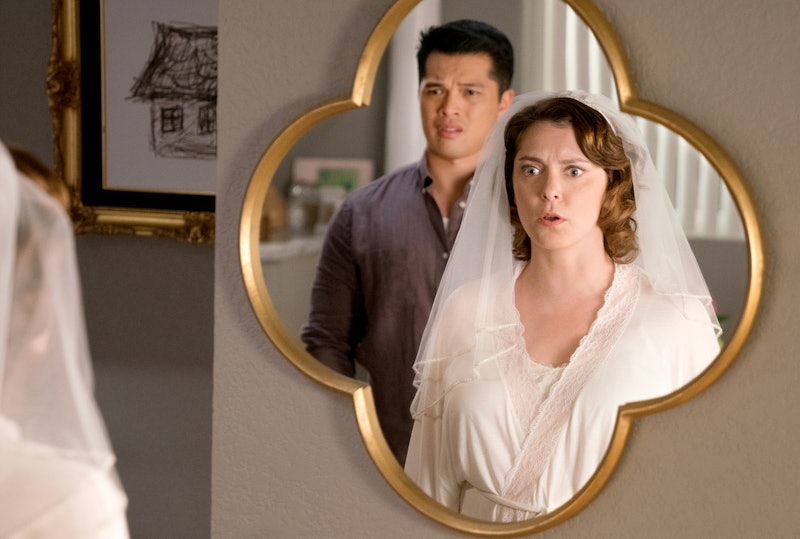 Josh Chan (Vincent Rodriguez III) is about to learn the true meaning of the phrase, "Hell hath no fury like a woman scorned." Crazy Ex-Girlfriend ended its Season 2 finale on the biggest game-changing cliffhanger yet, as Josh left Rebecca (Rachel Bloom) at the altar without any warning. The groom-to-be decided that he needed to do some soul-searching and thought that becoming a priest (and swearing off women entirely) was the answer. Of course, that didn't sit well with the already emotionally-fragile Rebecca, who, after almost jumping off a cliff in her wedding dress in front of all the guests, vowed to get revenge on Josh for breaking her heart and embarrassing her.

Crazy Ex-Girlfriend has always been about Rebecca's obsession over Josh ever since she decided to quit her job, move across the country and uproot her life after a chance encounter with her camp ex-boyfriend on the street, but now The CW's award-winning musical dramedy is setting the stage to explore an entirely different side of obsessive love ... and now the wait for Season 3 just got a lot harder to endure. Executive producer Aline Brosh McKenna excitedly tells Bustle along with a small group of reporters after screening the finale early that this development will change the entire show moving forward.

"Well it's going to be Crazy Ex-Girlfriend, isn't it?" she says in a small screening room at The CW office in Burbank. "They've really been together now so she really is an ex now. Rebecca very much is someone who takes on personas that she's received from the world, and in a time of crisis here, a new persona leaps into her mind and it's the scorned woman. We'll see how much she follows through on that and how her feelings evolve as she recovers from this big rupture that happens at the end [of the episode]."

According to McKenna, she and the show creator/star Bloom "have always talked about the series as different aspects of being a crazy ex-girlfriend." If Seasons 1 and 2 were about Rebecca desperately trying to get Josh back, the already-renewed Season 3 will be about how Rebecca handles this fresh rejection ... i.e., not well.

"Next year in some ways is the thing that you most think of as a crazy ex-girlfriend," she says. "We've gotten to know her over 31 episodes, but we don't know anything about her past, really. As Paula [Donna Lynne Champlin] says, the best predictor of the future is the past. It stands to reason that somebody who engages in these obsessive-romantic behaviors has done so before."

In addition to getting a glimpse of what Rebecca's future will look like now that Josh hurt her, Crazy Ex-Girlfriend also showed a major moment of Rebecca's past in flashbacks to when her married Harvard college professor dumped her after promising he would leave his wife for her. She set fire to his home, was charged with arson and ultimately spent time in a mental institution zonked out on so many pills that she spent her days in a fog, humming to herself. That's why she so abruptly changed law schools from Harvard to Yale and kept that entire chapter of her life a secret from everyone besides her parents.

"We wanted to show another instance in her life where she had engaged in extreme behavior and that this was a core wound and that she was still recovering from it," McKenna says.

As her "girl group" of Paula, Valencia (Gabrielle Ruiz) and Heather (Vella Lovell) don't know this dark past of Rebecca's, they're going to be all in when it comes to helping Rebecca "destroy" Josh.

"If that happened to you, no one would be surprised that you'd be like, 'F that guy,'" McKenna says. "But your girl friends for sure would be like, 'Something must be done.' I don't think she necessarily needs to make a secret of it because obviously he did something publicly terrible to her, which he hadn't really done in the past. The town and everyone knows that she is now someone who has been left at the altar and that's a big deal. For our show, we deal a lot with tropes, so that's another trope, [being] left at the altar."

What was truly surprising about Josh leaving Rebecca at the altar was that he didn't leave her for another girl, which is his usual move. Instead, he's decided to become a priest like Father Brah (Rene Gube) ... although in typical Josh fashion, he has no idea what that really means.

"He actually tries to do good and means well. I mean, that's why he goes to the priest all the time," McKenna says. "He's seeking goodness always and he's a religious person. He has a sense of wanting to better himself, but being run a little bit by his urges and one of his urges is he gets lonely. He's not really capable of introspection, so he does it via women. But he feels the most like he's in touch with himself when he's with someone who's giving him feedback about himself, and their information about him becomes his information about himself, so he's a bit of a benevolent narcissist."

In Josh's eyes, he ended the relationship with Rebecca because he needs to be alone, not for anything that she did. In fact, that's why he didn't open the "top secret" envelope containing information about Rebecca's past. He just threw it away and didn't look back.

"He realizes it's not her fault, no matter what's in there - and he knows it's something bad, but that's not what the problem is," McKenna says. "The problem is his own issues. He's a bit of a coward ... but I think for him, in a funny way, the most courageous thing that Josh has done all season is not open the envelope, because if he did, he would have something to blame the destruction of the marriage on."

Does Josh really have what it takes to become a priest, though? In a word: no. In more words: LOL you can't be serious! The girl-obsessed dude literally thinks it means getting a punny T-shirt and wearing a cool collar.

"Josh doesn’t actually know if he can get a shirt or if it’s a joke. It was probably a joke but in case it wasn’t he mentioned it because if they have cool shirts he might as well get one," McKenna says with a laugh. "He’s done no thinking, no serious research. To flee, it’s a panic move. We’ll see how much of it suits him, if any of it suits him."

Now take a moment and try to imagine how you would have felt watching the finale scene of the Season 2 finale if The CW hadn't already renewed the series for a third season. I know I would have broken my TV in anger. Be honest, you would have too. Thankfully, the network isn't going to leave fans hanging ... but with the lackluster ratings that Crazy Ex-Girlfriend consistently gets, the renewal was an extremely happy surprise.

"We write like Tim McGraw says, 'Live like you're dying.' We write like we're getting renewed," McKenna says. "We knew that this season was going to end with 'Josh Chan must be destroyed.' Always. I think it was in our original pilot pitch. Because the opposite of love is apathy. It's not hatred. It's the flipside of an obsession. And the priest thing came up maybe halfway through the season. We were trying to think about like, does he cheat on her? Is there another girl that he gets involved with? But it seemed like a lazy way for him to peel off. He's trying and there is something very spiritual about him so the priest thing just really hit the idea on the head."

While much of Season 3 will focus on Rebecca's revenge, don't count out any new romantic interests just yet. Nathaniel (Scott Michael Foster) made some big strides into being less of a jerk to Rebecca in the final two episodes, going so far as to send a private jet to make sure her father was at her wedding. Expect Nathaniel to be a big part of next season, although not necessarily in the same way that Josh was in the first two seasons.

"Our show is a romantic comedy, but not a love story, in a funny way, so it explores romantic comedy ideas," McKenna says. "He's still kind of an asshole. And people aren't suddenly not assholes. But he's got other aspects to him, which we started to see. And it didn't make any sense to us to just plug him into them having a relationship. What we [saw] in episode 11 is they have a lot of sexual chemistry, and we'll be playing with that. But it's not like, all of a sudden, he's gonna be her date to the prom."

Although considering how Rebecca handles break-ups, maybe Nathaniel would be better off if he stayed far, far away. Maybe becoming a priest isn't such a crazy idea.