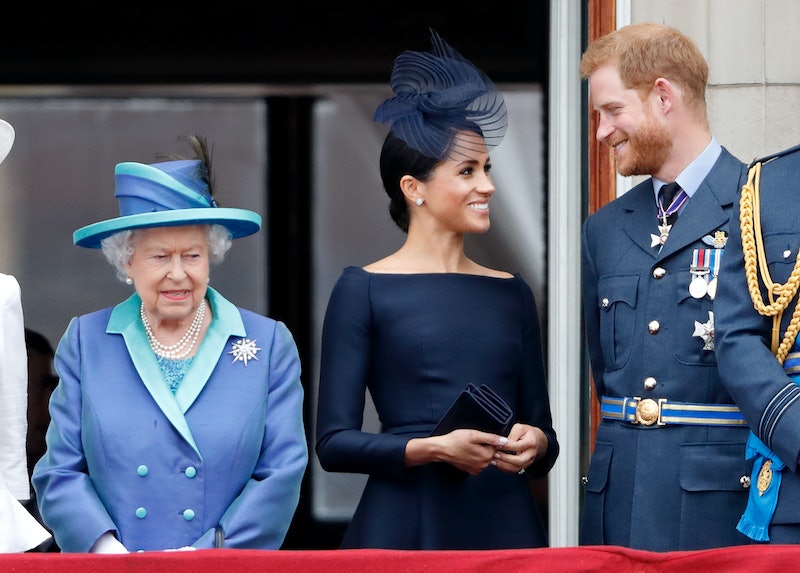 Meghan Markle, Duchess of Sussex, and Prince Harry, Duke of Sussex, make headlines simply by existing, and their latest move is dominating conversations around the world. But don't expect to see the drama play out on screen. The Crown won't show Meghan Markle and Prince Harry's exit from the royal family, as executive producer Suzanne Mackie told PA on Thursday, Jan. 9, as reported by the BBC. And there's a very good reason why viewers probably won't see the internet's favorite royal couple on the hit Netflix show.

As reported by E!, series creator Peter Morgan has intended for The Crown to last six seasons, each of which will cover a different period in Queen Elizabeth's extraordinary life. But he has no plans to cover royal events beyond the early 2000s, a sentiment which Mackie echoed to PA. "To be honest, whatever the life of The Crown is after where we are now, I doubt we'll ever go as far into the present day," Mackie explained. "I think we'll probably — we won't travel into the present day."

In fact, it's likely that viewers won't see Meghan depicted on The Crown at all, given that Morgan plans to end the show before she met Prince Harry. “I know how my show is going to end — but that’s long before where we are now,” Morgan told Entertainment Weekly in December of 2018. He explained that he feels uncomfortable writing about events that have happened so recently. “If I were to write about Meghan Markle I would automatically be writing journalistically," he said. "I’ve got nothing to say about Meghan Markle.”

Meghan and Harry shocked the world on Wednesday, Jan. 8, when they announced in a statement that they would be stepping back from their royal duties. As part of the move, they will be splitting their time between North America and the United Kingdom and working to become "financially independent."

Reactions have been mixed across the board, but Hollywood has already sent the couple some potentially exciting job offers their way. Between Meghan's acting career and Prince Harry's upcoming Apple TV+ series with Oprah Winfrey, the couple has an extensive television background, and ABC is already offering the royal couple a job in TV. "We have an office waiting for them in the animation studios building should they be looking to produce television," ABC Entertainment president Karey Burke said on Wednesday, per The Hollywood Reporter. And if they want to dive into reality TV, Andy Cohen has given Meghan an open invitation to join The Real Housewives of Beverly Hills. Now that would definitely set her apart from the Royal Family.

More like this
'The Crown' Season 6 Has Suspended Filming "Out Of Respect" For The Queen's Death
By Bustle Staff
Ashton Kutcher Wants Danny Masterson “To Be Found Innocent” In Rape Retrial
By Jake Viswanath
'The Queen’s Gambit' Season 2 Tweet Wasn’t From Anya Taylor-Joy
By Mary Kate McGrath, Jack Irvin and Grace Wehniainen
Here’s Everything Coming To & Leaving Netflix In February
By Jake Viswanath
Get Even More From Bustle — Sign Up For The Newsletter
From hair trends to relationship advice, our daily newsletter has everything you need to sound like a person who’s on TikTok, even if you aren’t.