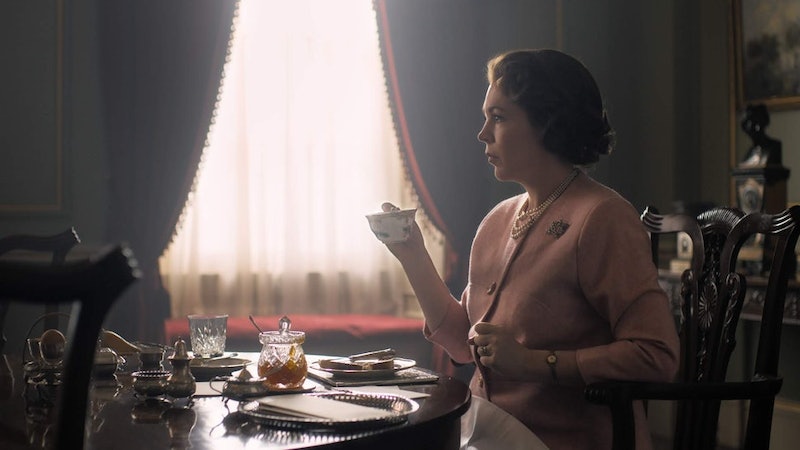 We're just over a month out from the third season of The Crown dropping on Netflix, featuring a brand new cast led by Olivia Colman as Queen Elizabeth II. She'll take over from QE2 1.0 Claire Foy — but according one of the show's directors, there'll be one major inconsistency between Foy and Colman as the Queen (aside, of course, from the fact that they are two entirely different people). The Crown's continuity problem between Claire Foy and Olivia Colman is a subtle one that perhaps only the dedicated royal fans out there will spot: unlike the blue-eyed Foy and the Queen, Colman has brown eyes, and neither contact lenses nor CGI could resolve the discrepancy.

Ben Caron, who directed the first four episodes of the upcoming series, told the Guardian that the behind-the-scenes team first turned to blue contact lenses, which didn't work out (have we learned nothing from Harry Potter, friends?) The lenses, Caron said, diluted the power of Colman's performance, making her appear as though "she was acting behind a mask." He added, "It was as if we had taken all of her acting ability and put it in a safe and locked it away." A bit harsh, Ben!

Editing Colman's eyes in post-production to appear blue didn't do the trick either, Caron said. "It didn’t feel like her. CGI-ing her eyes seemed to diminish what she was doing." So there you have it: Colman's Queen's eyes will be brown (and honestly I can't say I would have noticed either way).

Casting director Nina Gold told the newspaper that it didn't matter how similar or dissimilar Colman looked to Foy or the Queen: she had the role in the bag. "We always thought it should be Olivia, right from the beginning," Gold said. "The thing everybody loves about Claire was that she transmits her humanity in a very simple, plain, not-doing-anything kind of a way: you just get it. We felt that was exactly the same thing Olivia does. It’s not about looks — it’s about a quality."

Screenwriter Peter Morgan echoed Gold in a recent interview with Entertainment Weekly. "Olivia Colman was a list of one," he said. "I think I wanted to know [she would play the part] even before negotiations were done for seasons 3 and 4."

By the way, Colman's ever so slightly apprehensive about stepping into Foy's critically lauded shoes. "It's horrendous," she told Entertainment Weekly (she wasn't being entirely serious, of course). "Everyone loves Claire Foy, so I have got the worst job in the world at the moment."

Taking up another actor's role wasn't, in reality, an insurmountable challenge for Colman, a master of stage and screen. "“It’s the same as any classical play you do — everyone will have already played that part before," she told the magazine. Not that she didn't try a little bit of mimicry, she admitted. "The first week, I did feel myself trying to do Claire impressions. 'What would she have done?'"