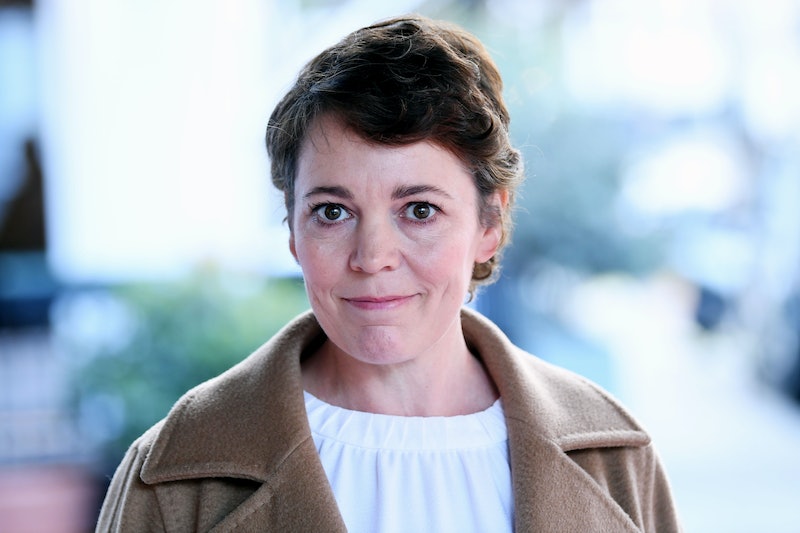 Those patiently awaiting the return of The Crown were put out of their misery this week, because Netflix finally released some exciting details about the upcoming third season. Yes, after a lengthy hiatus, we finally got to learn the show's official return date, and see pictures of the brand new stellar cast. Portraying the royal family in the Netflix original series might no longer be the job of Claire Foy and Matt Smith, but the new stars of the award-winning drama probably don't expect to rub shoulders with royals themselves. However, Olivia Colman revealed she accidentally met the Queen, who she plays in the show, and in true Colman fashion, the details are pretty hilarious.

The Academy Award-winner discussed her unexpected interaction with the British monarch during an interview with Entertainment Weekly, and revealed that her accidental meeting with the Queen came about during an event for the British Film Institute. Speaking to the publication, the actor revealed:

"I have accidentally met the Queen. It was at a British Film Institute gathering to raise the profile of British film, independent film. We suddenly found ourselves, 200 people, in a big queue. I thought maybe we were going in to have some food. I hadn't read the order of the day. [I] looked around the corner, and there was the Queen and Prince Philip, and went, 'Oh! Oh no! I don’t know what to do!'"

During the interview, Colman went on to add, "A gentleman with epaulettes said, 'Don’t overdo it, little bow, and you say, Your Majesty, and Your Royal Highness, and go. Make it as swift as possible and go'. I managed to remember what to say, sort of sticky-handed and bit sort of stumbly. That was it!"

Colman will replace Claire Foy as Queen Elizabeth II in the third series of the Netflix drama, and as reported by the Radio Times, The Crown will make its grand return to the streaming service on Sunday, November 17. The exact details of what viewers can expect in the new season are yet to be revealed, however, show-runner Peter Morgan has given some insight into which royal events will be covered this time around.

As reported by the Radio Times, Morgan revealed that The Crown series 3 will focus less on Prince Philip and Queen Elizabeth's marriage, and instead tell the story of Princess Margaret and Lord Snowdon's often troubled relationship. The season will also touch upon the Queen's relationship with then-Prime Minister Harold Wilson, however, another central focus of new series will also be the story of Prince Charles and Camilla Parker Bowles.

Although viewers will be more than familiar with this particular royal story, the show's producer has promised there is more to this story than meets the eye. During an interview with Entertainment Weekly, Morgan said, "People always assume Charles cheated on Diana with Camilla. It’s absolutely the wrong way round. He was deeply in love with Camilla and forced to marry Diana."

Yikes. It sounds like we have a lot to look forward to throughout the drama's third season. Buckle up, folks.

The Crown series 3 arrives on Netflix on Sunday, November 17