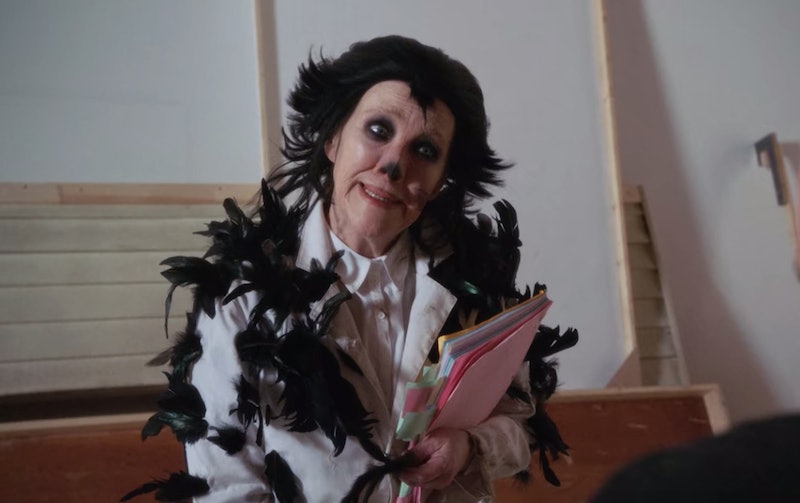 Like a phoenix rising from the ashes, the trailer for Moira Rose's The Crows Have Eyes 3 has finally come home to roost. Or, rather, to crow, as it were. The fictional film has been a subject of much discussion on Schitt's Creek, serving as Moira's grand return to the big screen after several years of lackluster opportunities. Viewers got a brief glimpse of the project during the Season 5 premiere, aptly titled "The Crowening," which featured Moira in all her feathery glory doing what she does best: entertaining the masses.

The project was filmed in Bosnia, however, during post-production, the powers that be opted to shelf the horror flick for the time being, leaving Moira to wonder if her career in acting had really come to a close. Luckily, that all changed after the Season 6 premiere when Moira discovered that the streaming service Interflix had saved the film and was gearing up to make it available to viewers on its platform. This prompted Moira to rethink her plans of retirement and she has since been on a social media kick, helping to promote the movie in any way she can. Though she did hit a few speed bumps along the way, like accidentally outing her son David as a bedwetter to her entire fanbase. But with great art comes great sacrifice, right? And now, Interflix has released the highly anticipated trailer.

“The crows have eyes,” the narrator says in the trailer, “and you better not look them in it.” A ridiculous tagline for an equally ridiculous story. Unsurprisingly, though, Catherine O'Hara is flawless in her portrayal of Moira — give her all the awards for flawless overacting. It shouldn't be long until Moria herself catches a glimpse at the trailer, which will hopefully leave her as satisfied with the outcome as the rest of us (though for very different reasons). This film has served as Moira's baby (or rather bebe) for so long, it's nice to finally see her hard come ultimately come to fruition before Schitt's Creek wraps up its sixth and final season.

No one is ready to say goodbye to these lovable characters, though series co-creator Dan Levy has hinted that the Rose family could always return for more laughs down the line. "Walking away from the show or choosing to sort of end the show, when we did was really out of respect for the show, and not any other sort of thing than that. I could work with these people for the rest of my life," Levy told E! News earlier this month, adding that he's still open to exploring an idea "that feels appropriate for these people to reconnect."

Perhaps that idea could center around the production of The Crows Have Eyes 4. Clearly this franchise has box office success written all over it and anyone who thinks otherwise can, well, eat crow.