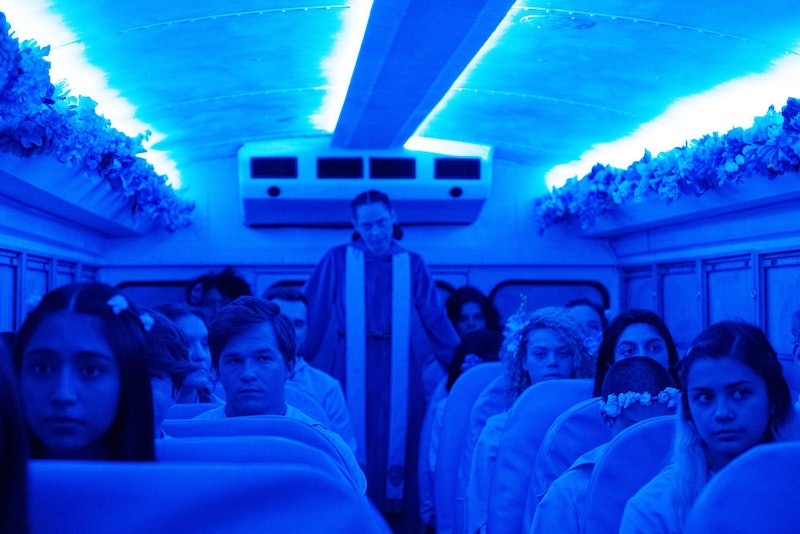 Spoilers ahead for the Season 1 premiere of The Purge. The Purge television show expands the world of the successful horror film franchise by exploring how a culturally-defining celebration of violence could affect American culture. One such outcome appears to be the formation of a Purge-worshipping cult that main character Penelope (Jessica Garza) is a member of. The tenets that the cult in The Purge believes in and what it asks of its members are unsurprisingly violent, but the most shocking aspect of this cult may actually be its members.

In the first scene of The Purge that the cule appears in, the leader — Good Leader Tavis, played by Fiona Dourif — claims, “We are the scarred, the beaten, the souls irreparably damaged. And it is that shared pain that allows us to understand each other so deeply. Tonight, that suffering ends, my darlings." Her speech is delivered to a crowd of cult members donning light blue robes before being escorted onto a light blue school bus illuminated with blue lights inside of it. Tavis says, "I will be your guide into the invisible, where there is no pain — only love. Come. The giving time is near. Let us ready," to her followers, all of whom, like Penelope and Tavis, are teenagers.

When Penelope's brother, Miguel (Gabriel Chavarria), comes looking for her, a group of teenagers in golden robes explain to him that she will be "Stepping out of the flesh and into the giving, into the invisible," by allowing herself to be purged. One of the teenagers explains that "The Invisible" is "like what you call Heaven, but it’s different. It’s for the lucky. Goddess Penny is going tonight where she will rejoin your parents." Penelope and Miguel's parents died during a previous Purge, which suggests that the other members of the cult may also be people whose lives were upended by The Purge and are trying to find purpose in the state-mandated violence that ruined their lives.

While the cult romanticizes the idea of giving one's life to be purged, it seems that her faith cannot blind Penelope to the brutality that The Purge invites Americans to enact on each other. The final scene of the pilot episode of The Purge shows the light blue school bus rolling up to a group of masked figures brandishing a variety of weapons. A member of the cult is called upon to sacrifice themselves, and then make their way to the masked figures with a peaceful look on his face. The momentary peace fades away when the masked strangers charge at him and begin swinging their axes. The episode ends with Penelope realizing that maybe this death cult doesn't have her best interests in mind.

While the first episode of The Purge lays out the core purpose of the cult, there are still a great deal of questions left to ask. How does this cult recruit members? Are all of its members teenagers? Is the cult run by teenagers, or is the cult a front for adults to find willing Purge victims? While the workings of the cult are still a mystery, the ultimate goal of the group is clear — to find teenagers willing to die for The Purge.