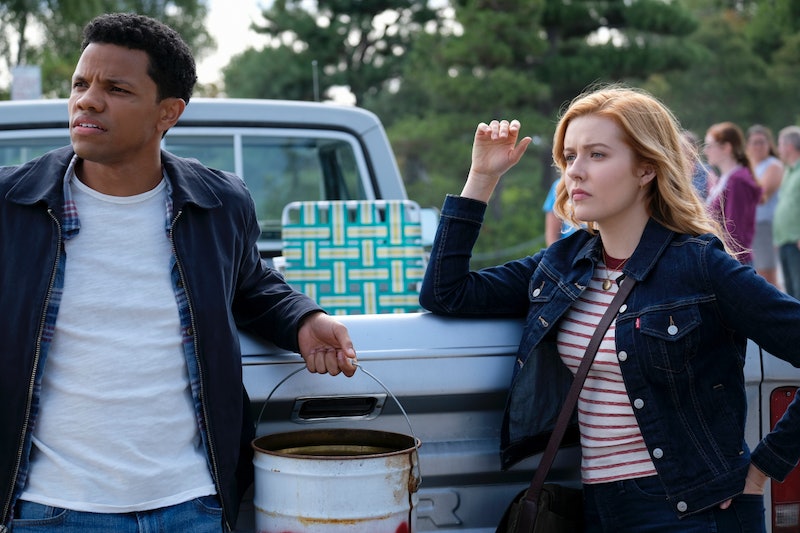 The first time teen detective Nancy Drew sees the brown-haired, brown-eyed Ned Nickerson, in 1932’s The Clue in the Diary, he’s backing her blue roadster away from a small fire. She mistakes the college sophomore for a car thief, and Ned soon becomes her boyfriend. In Nancy Drew, the new CW series, Nancy (Kennedy McCann) and Ned Nickerson aren’t putting a label on things. The first time we see them together, they’re having bookshelf-rattling sex so intense that The History of Western Morals threatens to topple to the floor. He goes by Nick instead of Ned, and he's a mechanic with the reading habits of a college sophomore. By the end of the episode, Nancy will take him for a murder suspect, lusting after him all the same. For almost 90 years now, Nancy’s been teenaged, but suddenly she seems like a teenager.

The noirish, hour-long, vaguely supernatural drama is clearly meant as a departure from the novels that made Nancy Drew a literary holding pen — digestible yarns that were cautious not to throw their heroine more than her tweenhood readers (the books were targeted at middle-schoolers), and their parents, could swallow. It would be insufficient to say that this Nancy Drew, from executive producers Josh Schwartz and Stephanie Savage (Gossip Girl, The OC), has been “updated” for 2019, as if she’s been given an Instagram account and a penchant for house plants.

As one especially sanctimonious pan of the new series laments, Nancy is “almost unrecognizable to the decades of women who grew up with the character.” That writer both exaggerates the facts and undersells this installment's Nancy. Our heroine is still resourceful, still standing up to adults who underestimate her, still navigating the world without her mother. It would be more fair to call her translated for a new and more mature audience that appreciates a steamy romance as much as a ghost story.

Instead of playing the plucky leader to her willing sidekicks, for example, Nancy’s a loner who struggles to befriend the other misfits working at the local diner. She’s not the apple of her daddy’s indulgent eye. In fact, Carson Drew (Scott Wolf) is seemingly distracted by his own bereavement and their relationship is strained.

Nancy Drew has never been a fixed character. Across more than 250 iterations in books, movies, video games and television/limited series, she’s been red-haired and blonde and brunette. She can be a scuba diver or a safe-cracker or, in a pinch, an amateur horologist. As Isabel Ortiz observed in her 2015 Paris Review essay "Nancy Drew in Starlight," “On separate occasions, her friends have walked in on her tap dancing, learning Morse code, and tap dancing in Morse code.” She’s been third-person and, more recently in the Nancy Drew...Girl Detective series, first. “The kids who read Nancy Drew also listen to Britney Spears. That’s one reason we wanted to make Nancy cooler and more contemporary,” explained a Simon and Schuster exec in 2004, defending that reboot. “But don’t expect anything too racy. Middle school readers are ‘schizoid,’ wanting to grow up but wanting the security of childhood.” If Nancy was once an American Girl doll, now she was a Bratz.

But the new CW series is for girls (and boys) who are too old for dolls, with their permanent make-up and erased genitals. The Nancy of Schwartz and Savage’s creation breaks into houses (nearly a Nancy Drew daily-do) and yells at her dad and has sex in the middle of the day with a nice guy she likes. When her mother died last year, she flunked her classes and blew off college.

But tallying the dangerous and so-called “adult” things Nancy does in the pilot only underscores how deceptively adult and dangerous her stories have always been. The first book, The Secret of the Old Clock, opens with Nancy rescuing a young girl from drowning and then immediately follows it up with a car chase. When her mother dies (at a much younger age than on the show), Nancy takes over running the household. It’s impossible to say which Nancy is more adult when we’re learning to be such different kinds of adults these days, unlikely to even use the word "housekeep" as a verb. The CW Nancy’s boldness doesn’t feel cheaper for being more petulant than precocious.

Despite being a hero to Oprah, Hillary Clinton, and Laura Bush, the appeal of Nancy Drew has never been universal. Even her inventor — Hardy Boys creator Edward Stratemeyer — thought the character as written by journalist Mildred Wirt Benson was “too flip”. In 1964, after 32 years in publication, she was still the subject of academic debate. Professor Arthur Daigon, writing in The English Journal, likened the novels to a bout of measles: “Nancy Drew apparently must run her course.” But Schwartz and Savage have made their names as writers and producers on shows, like The OC, that take adolescence, especially that of young women, seriously — that regard it as a feature of life rather than a phase of it.

At one point in the pilot, Nancy finds her father kissing another woman. “All this time, I thought you were devastated and instead you were hooking up,” she shouts. “I’ll get the hell out of here and you can get back to your secret life,” she adds before running away. It’s hurtful and dramatic and thoroughly un-adult. But the scene takes her feelings as seriously as a show would take an adult’s feelings, which the novels and many of the other reboots rarely dared. The new series suggests that perhaps the first step in creating a Nancy Drew to attract new fans is to stop worrying so much about the old ones.

More like this
Olivia Colman Stars In First-Look Trailer For BBC's 'Great Expectations'
By Sabah Hussain and Sam Ramsden
Netflix Shut Down 'Bridgerton' S3 Rumours About A “Very Dark” Storyline
By Bustle
Everything To Know About The 'Daisy Jones & The Six' TV Series
By Maxine Harrison and Brad Witter
The Banned 'Friends' Ad Shows Monica As You’ve Never Seen Her Before
By Sam Ramsden
Get Even More From Bustle — Sign Up For The Newsletter
From hair trends to relationship advice, our daily newsletter has everything you need to sound like a person who’s on TikTok, even if you aren’t.