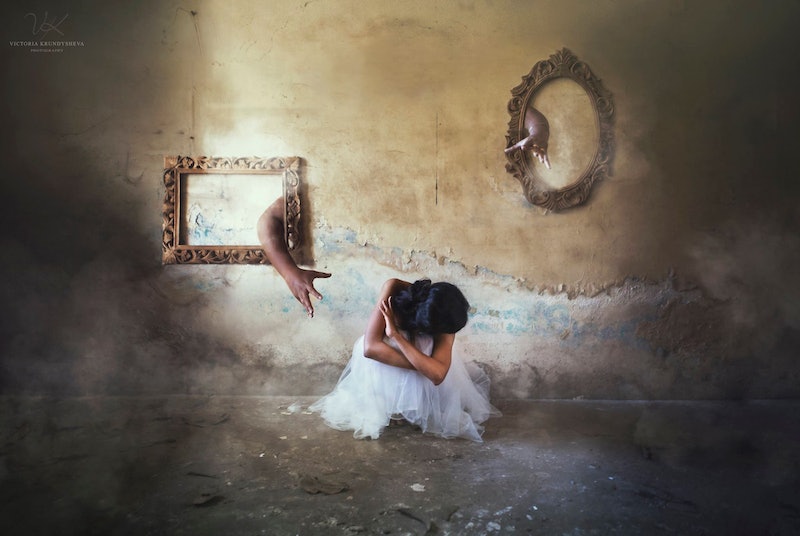 Depression can manifest itself in many ways. That's what artist Victoria Krundysheva's photo series The Dark Room captures: The physical darkness and pain associated with depression. Though categorized as a mood disorder, the effects of depression go beyond the way a person thinks and feels.

Krundysheva is a photographer who focuses on fine art and conceptual work. The Dark Room shows images of women isolated in a desolate room. Each photo depicts the subject in some form of pain; one, for example, shows a woman with scratches on her back, while another features a woman covered in a thick, black paint. As the title suggests, the series captures depression in its darkest forms, addressing the components we don’t often discussion. Depression, as Krundysheva states in a description of the series, “is not poetic, it’s painful.”

According to Krundysheva, she tries to make important personal or social issues the focus of her work. She tells Bustle, “Seeing how many people are fighting this battle and how it is still being subjected to stigma or ignored by big parts of society made me want to create these photos.” Her project shows the mental and physical pain of depression in a visceral way, taking a condition often portrayed inward and turning it out.

Depression is one of the most common mental disorders; the National Institute of Mental Health estimates that 16 million adults experienced depression in 2015. But despite being one of the most well-known and commonly-experienced forms of mental illness, there are still many misconceptions about depression that persist today. Krundysheva hopes her photography series will help break some of those myths, urging people to become better educated on depression. “People tend to demean the pain … and think that ‘It's all just in their head,’" she says. “But they forget that everything begins there. We accept that emotions are real, feelings are real. Yet, when it comes to depression and anxiety, it is either dismissed or stigmatized.” Depression is real. Krundysheva’s series works to show what it can look and feels like.

Krundysheva hopes the series is a reminder that we need to take mental illness seriously. “It can happen to anybody,” she says, “We need to learn to respect it and provide equal, unbiased support, help, and treatment to people fighting it.”

This is not Krundysheva’s first project tackling social issues, but it is her first project specifically addressing depression. She urges other artists to speak about their own experiences with mental illness saying, “It may be hard, it may be scary…[but] it is a way to help people battling this see that they are not alone and that their suffering is real.”

Krundysheva hopes to keep making art that makes a statement and opens the conversation on important societal issues. She believes art is one of the best and loudest platforms, saying it can “bring about a positive change, whether it is in society or in a mind of an individual, even yourself.”

You can view more on The Dark Room here, and make sure to check out Victoria Krundysheva on Instagram and Facebook.

If you are struggling with depression and need help, you are not alone. The National Suicide Prevention Lifeline provides 24/7, free, and confidential support: 1-800-273-8255.