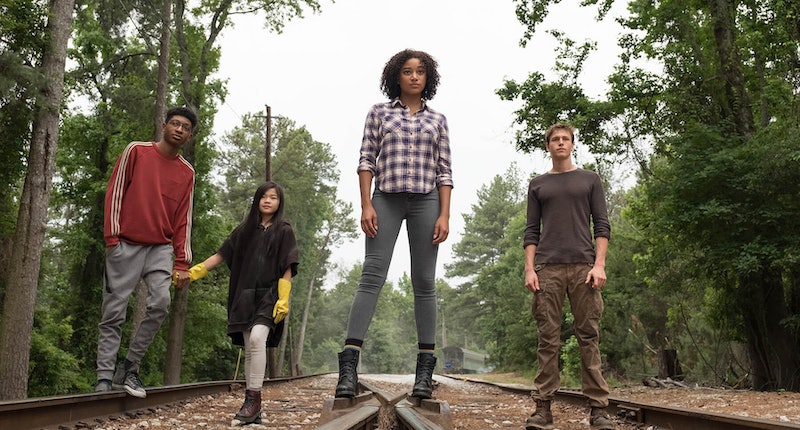 In the dystopian YA movie The Darkest Minds, teenage Ruby Daly (Amandla Stenberg) discovers that she has rare telepathic powers, putting her at risk since the government wants to control all its super power-possessing kids. The movie is based on a book of the same name by Alexandra Bracken, and while there are some major similarities between the two versions, one big difference is that unlike the novel, the film adaptation of The Darkest Minds has POC teen leads — including Ruby, whom the novel describes as white. Speaking over the phone recently, the film's director, Jennifer Yuh Nelson, reveals why that change means so much to her, and to audiences.

When the casting news for the movie came out in 2016, Bracken took to Tumblr to reproach fans who had taken issue with the casting of Stenberg, who's biracial, as Ruby. One user on Tumblr told asked Bracken, "I don’t understand why they would cast a black actress for a white character? Chubs is a main character and he’s black. Are they gonna cast a white guy to play him?" The author responded by simply saying, "Amandla was cast because they are an amazing actor and right for the part."

In The Darkest Minds, out now, Ruby is joined by Chubs (Skylan Brooks), who is black; Zu (Miya Cech), who is Asian-American; and Liam (Harris Dickinson), who is white. It's a great example of on-screen diversity, yet in a different Tumblr post, Bracken wrote that people had requested that either Zu or Chubs get white-washed. "Many of the genuinely racist messages I’ve gotten have been asking to make those roles white, because heaven forbid there only be one white actor in the core four characters," Bracken wrote.

For Yuh Nelson, who herself was born in South Korea, portraying a racially diverse ensemble just made sense. "They’re just good characters and then we just cast them according to what is appropriate for that character," the director says. "It's wonderful to see people that may look different, but actually look a lot like the people watching these movies, get the chance to lead a movie."

The director of three films (she previously directed Kung Fu Panda 2 and 3), Yuh Nelson says that giving people opportunities they might not otherwise get is one of her greatest goals as a filmmaker. "The thing that was really eye-opening for me is that the reason why any of us get to where we are is because we had somebody believe in us, somebody that gave us a chance," she explains. "And I think if that’s the big takeaway for all of this, the more people give different candidates a chance, at least consider them, those are the people that will truly make change."

Yuh Nelson got her own start as a director thanks in part to the encouragement of her friend Melissa Cobb, a former Dreamworks executive and current Netflix vice president. After starting as a storyboard artist and moving up to Head of Story on the first Kung Fu Panda, Yuh Nelson was motivated by Cobb to direct 2011's Kung Fu Panda 2 — making her the first woman to solo-direct a major Hollywood animated feature.

"I was kind of shocked and appalled, and I was like, wait how long has animation been going around? Wait what?", Yuh Nelson recalls now of earning the title. Yet as disturbing as it is that a woman didn't solo-direct a major animated film until 2011, Yuh Nelson says now that she hopes her success inspires other people "to see someone like them doing this job."

And The Darkest Minds, a diverse movie about teens speaking out regardless of their backgrounds or stereotypes assigned to them, is something that all people can benefit from seeing. "The positive things about the story is that it doesn’t matter what category they’re placed in," Yuh Nelson explains. "They’re friends, they depend on each other, and they find a place where they feel safe. They actually say, ‘we don’t categorize by colors here.'" Words of wisdom for the non-dystopian world, too.