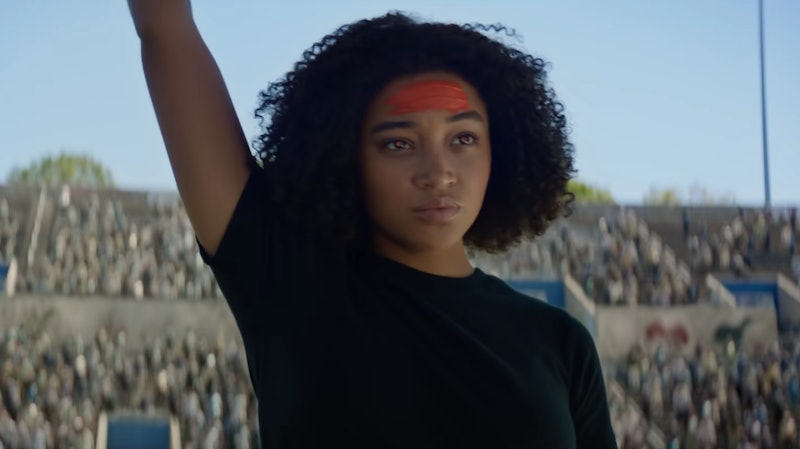 Spoilers ahead. In The Darkest Minds, in theaters Aug. 3, 90 percent of the world's population of kids get wiped out by a mysterious disease called IAAN, or Idiopathic Adolescent Acute Neurodegeneration. The kids who survive the inexplicable disease are detained by the government in camps, but not all of them. Those living outside of the IAAN camps are either fugitives or members of the Children's League. The main character, Ruby (Amandla Stenberg), ends up in the League in The Darkest Minds with the person who helped her escape the IAAN camp, Cate (Mandy Moore).

Considering that you don't get to actually see the League until the end of the movie, it's hard to know what exactly it is. It's not with the government, because Cate and her partner are stopped Lady Jane (Gwendoline Christie) from capturing Ruby and returning her to the government's camp, but it still isn't exactly freedom for the kids in The Darkest Minds. The fact that Ruby's crush, Liam (Harris Dickinson) desperately wanted to escape the League also makes the organization seem menacing. It turns out that the League is somewhere in between good and bad, because the organization rescues kids from the government's camps, but it also forces them to join a militia.

In a way, the League makes The Darkest Minds even more disturbing because of its moral ambiguity. While watching the movie, you can tell that the government's camps, which they claim rehabilitate children, are malicious. Once it comes out that Ruby is an Orange rather than a Green as she has disguised herself as for years, the doctors at the government's camp intend to euthanize her. When Cate saves Ruby, it seems like the rest of the movie will show the two of them working together to liberate the imprisoned children.

Everyone who has read the Darkest Minds book series knows that that can't happen though, because Ruby's telepathic powers (characteristic of Orange-level kids) senses danger from the League. Instead, Ruby sets off with a group of three other escaped kids, Zu (Miya Cech), Chubs (Skylan Brooks) and Liam.

Throughout the film, Liam alludes to the fact that the League turns killers out of children. He claims that he doesn't want to fight, and that leads Ruby to bargain with Cate later to make sure that Liam wouldn't have to join the League. Instead, Ruby alone joins the thousands of kids in a Gladiator-like arena. It's as if Ruby's escaped the government's camp only to join another restrictive group.

For those who haven't read the Darkest Minds series, written by Alexandra Bracken, the League will remain somewhat mysterious even after the dystopian movie. Should the film get a sequel, which Bracken's trilogy suggests will happen, Ruby's trials and triumphs in the League will likely serve as the main focus.

So does that mean Ruby will have to go to war against the government? It very well could, but the headstrong character could very well find a way out of it just like she did in The Darkest Minds.