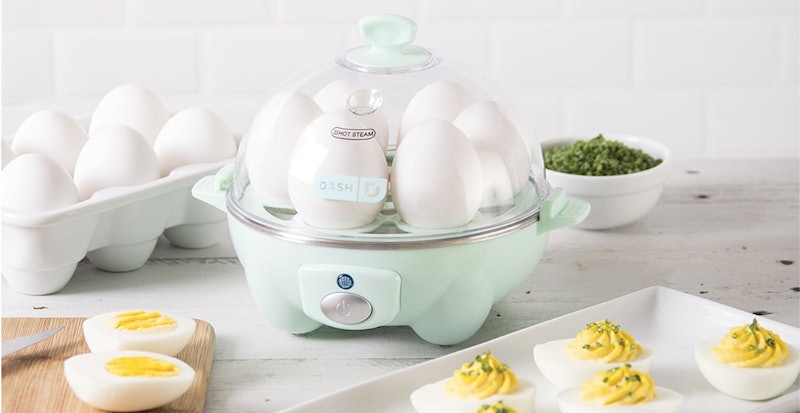 I always thought that when I eventually found the love of my life, they would be ... well, human. Sentient, even. But as Sheryl Crowe so wisely once sang, "Every day is a winding road," and apparently mine has led me to true love in a most unegg-spected way (sorry): with the Dash Rapid Egg Cooker on Amazon that everyone has been freaking out over for the past few months.

You see, I was once an ordinary mortal. I boiled water and dumped a dozen eggs in there on Sundays, crossed my fingers, and prayed to whatever meal prepping gods Gwyneth Paltrow descended from that they would cook to a precisely medium-ish boil, because apparently my mouth is very bougie about the consistency of my eggs. I got perfect eggs maybe 50 percent of the time, but 50 percent is not the kind of life I want to lead. Not for me, or for my egg-eating brethren, or for my future egg-eating children.

Enter: the egg cooker that changed my life and redefined the meaning of love. Odds are you have seen this contraption making the rounds; it's been written up by other egg stans on other websites multiple times since it first crossed my eyes in a Mashable article in December. It's affordable, at $19.99 a pop, but even more affordable considering everything it's capable of — it has the capacity to soft, medium, and hard boil six eggs at once, and can also poach, scramble, or make omelettes. Literally all you have to do is find an egg, pour some water into the egg cooker, and let 'er rip.

I bought it on a whim around Christmas of last year, and ever since I started using it I have not been able to shut the heck up about it. My coworkers have purchased them. My coworkers have gifted them to their significant others. So life-changing is this egg cooker, that I sent one to my parents' house so they could bask in its glory, too.

The reason I personally am so obsessed with it is that it takes about seven minutes for eggs to boil, and the measuring tool they give you is so precise that you never have to worry about how your eggs are going to turn out — the measuring cup shows you exactly how much water to put in depending on the kind of boil you want, and it has yet to disappoint. Every now and then you'll get an egg with a slightly weaker shell and it'll crack and leak some egg out, but it's a fairly rare occurrence (and even when it does happen, cleanup is super easy, since it tends to cook and harden even when it "leaks").

The upside of the egg cooker, though, is also its downside: your eggs never overcook because it turns itself off automatically. But when it does that, it lets out the most unholy wail you will ever hear in this or any of your other nine lives. If you can handle that, though, it's well worth the mental "AGHAKGJADFKLGJADFGJ!" you get every time the timer goes off to enjoy some sweet, sweet, lazily cooked egg.

Other people I've talked to that I've either forced this machine onto or happened to own it themselves also enjoy it because it can steam other foods for you, like vegetables and fish. This is far too advanced for my liking, but the egg cooker comes with instructions for how to attempt it yourself.

Other uses for your egg cooker include, but are not limited to:

And apparently, if six eggs are TOO FEW for your and your egg-static heart, apparently there is now a version that cooks 12 eggs at once. I can't vouch for this as I've never tried it and am personally not convinced human beings deserve this kind of power, but here it is, if you want to risk flying too close to the sun.

Anyway, all this is to say, I now eat two to three eggs a day on the reg, my skin is clear(ish), my crops are thriving, and if I eventually turn into an egg I will walk away from human life without so much as a wistful glance back. Life is eggsquisite.