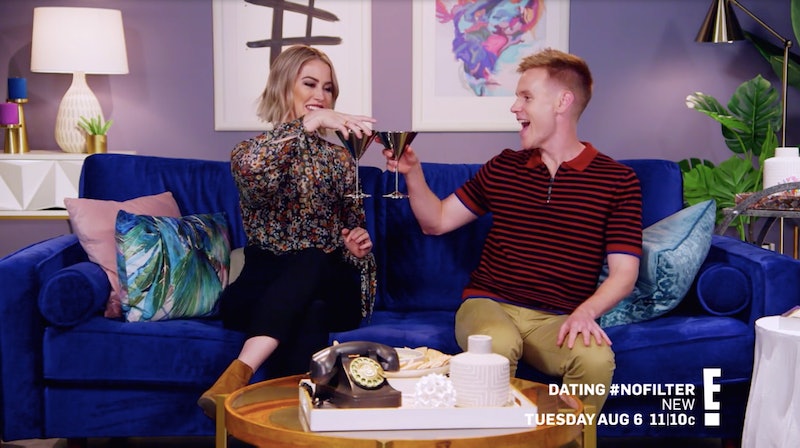 If you're burnt out on dating and in need of some funny, unfiltered commentary about how hard and awkward the whole thing can be, you're in luck. Dating #NoFilter now has a Season 2 premiere date. Bustle can exclusively reveal that the E! show returns Aug. 6, this time with a new crop of comedians to joke about your single life woes.

If you missed the first season, the show features various comedians as they watch and comment on various singles' blind dates. It's kind of like a snarkier (and less tear-filled) version of the last couple minutes of a Queer Eye episode, when the guys are gathered around the TV watching how things went after they left. They yell at the screen like we would at home, but with more quips.

The below promo offers a sneak peek at Season 2, which shows some of the horrors and hilarities awaiting on the Dating #NoFilter's blind dates. The comedy writes itself, but E! has gathered some experienced funny people for the occasion anyway. A few of them are returning from Season 1, but the rest are new to the couch. Watch the preview and get to know the cast below.

Connors is a queer Canadian comedian with an improv background who wrote and starred in two CBC digital series: Cara Cooks and Every BLANK Ever. Her unscripted comedy series, Cara Takes Up Space, is set to air on Out TV later this year.

The BuzzFeed alum was recently selected to be a writing fellow in the 2019 Sundance New Voices program for her dark comedy pilot, Where We Are, and is working on a digital series for Comedy Central.

Monroe made it to the Top 10 on Season 8 of NBC's Last Comic Standing has done stand-up all over TV. You may have also seen him in Late Night, Master of None, and MTV's Guy Code and Joking Off.

Towers is not only one of Time Out magazine's 2018 Comedians to Watch and a regular at comedy festivals, his short film Killer Friends (Towers is the writer, director, and star) made the rounds at film festivals as well. He's next set to appear in Season 3 of Netflix's Dear White People.

Fans of E! already know Parker as the co-host of Nightly Pop and a correspondent on Daily Pop, E! News, Live From E! on Facebook, and E! Live from the Red Carpet. Her background is more in journalism than comedy, though: she started at a local NBC news affiliate in San Francisco before working at TMZ in Los Angeles. You may also recognize her as a onetime correspondent for The Insider on CBS, the host of Love & Hip Hop's reunion shows on VH1, or from her appearances as a pop culture expert onThe Wendy Williams Show, Access Live, and The Talk.

More like this
Everything To Know About 'RHONY' Season 14
By Jake Viswanath and Alyssa Lapid
Seann Walsh’s Girlfriend Has Played A Major Role In His Jungle Journey
By El Hunt
Yes, That Is Victoria & Another ‘BiP’ Alum In Zach’s ‘Bachelor’ Trailer
By Kadin Burnett and Grace Wehniainen
Pete Davidson & EmRata Were Seen Getting Cozy On His Birthday In New Photos
By Jake Viswanath
Get Even More From Bustle — Sign Up For The Newsletter