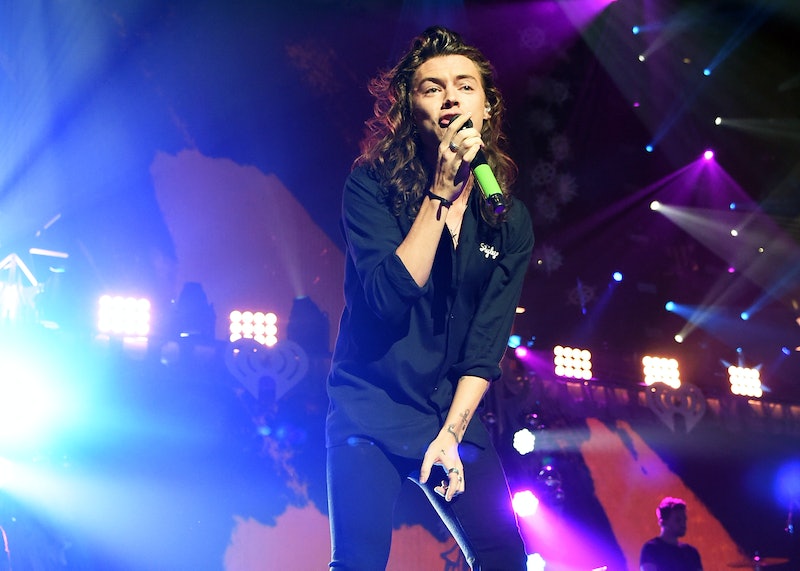 Guys, having just listened to Harry Styles' debut solo single, "Sign Of The Times," I have to say that I'm pleasantly surprised. I don't know what I was expecting to hear, but it was definitely not this bombastic slice of rock-pop goodness that the singer has served up. And after numerous listens to the almost six minute long ballad, one thing is gloriously evident about it: David Bowie's influence on "Sign Of The Times" can be heard all over the song, and it could indicate major things for Styles' career.

From the very first opening piano chords to the bold, choir backed vocal of the finale, "Sign Of The Times" sounds like a contemporary mashup of some of Bowie's best work from Hunky Dory — an album full of sublime experiments in redefining what rock, pop, and the classic ballad could sound like. Clearly, this is Styles' own moment for redefining those same genres of music within the one song. In doing so, "Sign Of The Times" announces his solo debut with a clear cut confidence and staggering ambition.

It's worth stating, too, that Bowie's influence on the overall sound of the song is so blatant that it feels like a deliberate creative decision. After all, "Sign Of The Times," isn't just evocative of one specific Bowie signature, but of many of them. And the delivery of these signatures within the song indisputably announces Styles as an ambitious solo artist, eager to be taken seriously.

Lyrically, it's impossible to hear the lines, "Just stop your crying, it’s a sign of the times / Welcome to the final show / I hope you’re wearing your best clothes," of "Sign Of The Times," without automatically thinking of Bowie's brazen piano ballad, "Life On Mars." The line, "Take a look at the lawman/ Beating up the wrong guy/ Oh man, wonder if he'll ever know/ He's in the best selling show," sounds like a direct older relative of Styles' lyric, and the two songs also share similar musical cadences too.

From the way that "Sign Of The Times," and "Life On Mars" both build up from their tender piano beginnings into a brash, sweeping drama, to how both of the songs are punctuated by an impassioned closing vocal (also reminiscent of the end of Bowie's "Five Years"), the inspiration is undeniable.

Throughout his career, Bowie established himself very much as an artist who could also play with the expectations of his audience, and change his form at a whim. There was never a moment when he wasn't surprising. While Styles may be simply paying tribute to a musical hero of his with such musical references as his palette, his alignment with Bowie's sound could also signal his capabilities for reinvention.

And, evidently, there's some reinvention at work in the next phase of Styles' career. Though the DNA of his boy band roots are still clear within "Sign Of The Times," they've also evolved to showcase his metamorphosis to the world. In a manner that would make Bowie himself proud, Styles has turned to face the strange and has changed. And if "Sign Of The Times," is anything to go by, then this change is truly colossal, and something for fans to be extremely excited about.