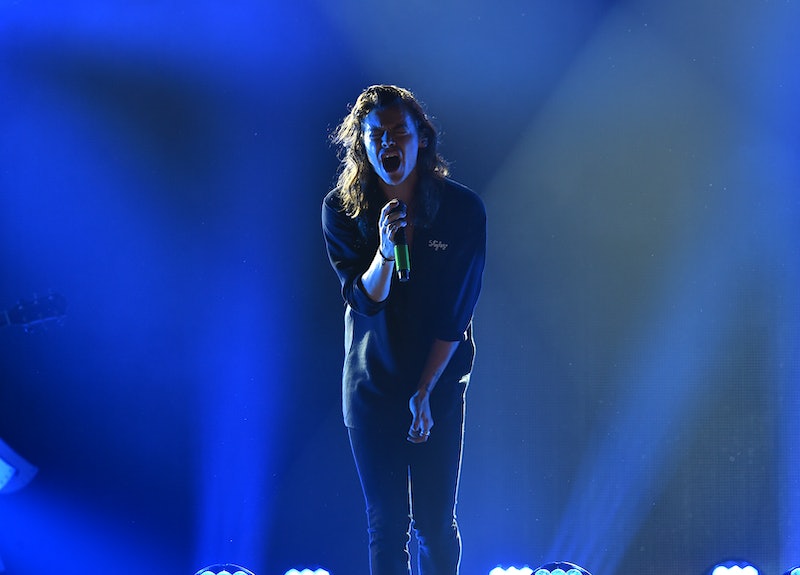 Although there had been years of speculation, the world only officially had a mere week to prepare itself for Harry Styles' first solo song, "Sign of the Times." While I don't mean to sound ungrateful since I very much appreciate not having to wait long between the announcement of the song and its release on April 7, after hearing it, I could have used some extra time to emotionally prepare myself. That's because the lyrics of Styles' "Sign of the Times" are more epic and mysterious than perhaps expected. Is the song about religion? Is it social or political commentary? Or is it channeling One Direction and simply about a relationship? No matter the exact meaning behind Styles' "Sign of the Times" lyrics, you're going be moved by them and his vocal performance.

The lyrics to Styles' song are a bit sparse on content — as in, many of the lines repeat — but that doesn't mean there isn't a decent amount to unpack. After all, Styles told Nick Grimshaw on the BBC Radio 1 Breakfast Show that, "It's the song I'm most proud of writing." Yet, in the interview, he didn't give any insight into the inspiration for the lyrics or what "Sign of the Times" is supposed to be about. But don't let that stop you from reveling in the glory that is Harry Styles' first solo single.

Considering the claims that Styles' new music has David Bowie and Freddie Mercury vibes aren't that far off base, perhaps fans will never know the full meaning of "Sign of the Times." (I mean, did you understand what Bowie was singing about most of the time?) However, I'm going to give it the old college try by overanalyzing the lyrics, so let's start with the first verse:

Welcome to the final show

Hope you're wearing your best clothes

You can't bribe the door on your way to the sky

You look pretty good down here

But you ain't really good

With the reference to the "final show" and the "door on your way to the sky," you could argue the song is about death. Perhaps the door to the sky is a reference to the pearly gates and how while the subject of the song looks good on Earth, she (or he? let's stick with "she" for now) might not be able to get into heaven since she's not actually good — and you can't bribe your way in. Considering the somewhat biblical lyrics, the whole idea of "best clothes" is even kind of like wearing your "Sunday best" on church days.

If we never learn, we been here before

Why are we always stuck and running from

We never learn, we been here before

Why are we always stuck and running from

The pre-chorus is when the song seems to become more social commentary than religious — after all, the title is "Sign of the Times." Maybe it's because Styles will be in Christopher Nolan's World War II movie, Dunkirk, or because he repeats the word "bullets," that images of violence and war come to mind. Fascinatingly, sometimes it sounds like he's saying "your bullets" instead of "the bullets." These lyrics are particularly relevant for U.S. fans since Donald Trump ordered a missile strike on Syria the day before Styles' song was released, but they will resonate with all citizens of the world as violence between nations seems to be something that "[w]e never learn, we been here before."

It will be alright

They told me that the end is near

While fans on Twitter have indicated that Styles singing, "Just stop your crying," isn't really working for them because it's making them cry even more, it does sound like he's trying to soothe someone he loves. "We gotta get away from here" could be about running from a toxic element that's damaging a relationship, but the line, "They told me that the end is near," sounds more like he's bringing that social awareness back into the mix. Actually, doesn't that line make "Sign of the Times" sound almost apocalyptic?

Have the time of your life

Breaking through the atmosphere

And things are pretty good from here

Remember everything will be alright

We can meet again somewhere

Somewhere far away from here

For the second verse, Styles embraces the Bowie comparisons by singing about "breaking through the atmosphere." It sounds like he's looking down on Earth, so while I'm absolutely deconstructing the lyrics too much and ruining the artistry of it all, I at least have to throw out the theory that he could be dead and telling the subject of the song that they can meet again in another life.

We should open up

Before it's all too much

Will we ever learn?

We've been here before

It's just what we know

Before you mourn Styles' fake song demise, the bridge puts us back into "Oh, this is a song about a relationship" territory. Yes, he could be saying that people in general need to "open up" to fix world issues, but this part seems more personal.

Yet, that's the beauty of the "Sign of the Times" lyrics. They aren't explicitly stating what Styles is singing about and that ambiguity is hauntingly lovely. So whether he's warning listeners about the end of days or just the end of a relationship, it doesn't really matter because Styles has proven with his first solo single that his lyrics don't have to be definable to be impactful.