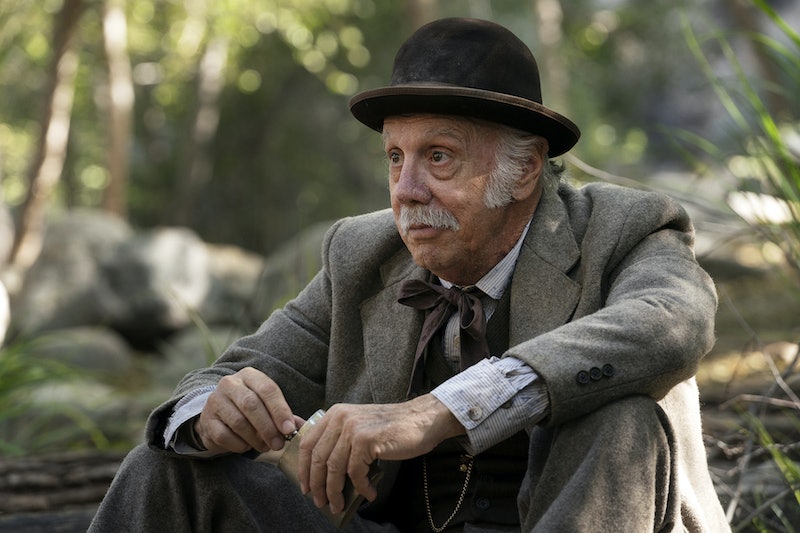 Spoilers ahead for Deadwood: The Movie. It's been 13 years since Al Swearengen (Ian McShane) uttered the final words of the HBO series Deadwood and scrubbed Jen's blood out of the floorboards. Although it's now 1889 and ten years have passed (in the Deadwood universe, that is), life in the makeshift, South Dakota town seems to have stayed pretty much the same. However, fans will be happy to learn that the Deadwood movie ending is much more satisfactory than the quiet series finale.

The HBO show was canceled back in 2006, and since then, there were talks to finish up the story with two separate films. Eventually, however, the idea lost steam, with the actors going on to star in other shows like Breaking Bad (Anna Gunn), Justified (Timothy Olyphant), Kings and American Gods (McShane), and so on. However, by 2017, series creator David Milch had created a script, per Variety.

And now that Deadwood is back in its final form, viewers will naturally have high expectations for the film — especially since the show had what many felt was an inconclusive ending. Fortunately, fans should be much more satisfied with this film ending, as it's sitting pretty with a 97 percent on Rotten Tomatoes.

The movie opens with South Dakota's statehood celebration. Even out west, America is being pulled into the 20th Century, albeit kicking and screaming. Power lines can be seen on the outskirts of town, and Deadwood is a much more polished, established community than it was when the show first premiered in 2004. "It's not just a repetition of how Deadwood was. It's Deadwood 10 years later," McShane told Vulture in a May interview. "The town is no longer the same. There's some buildings now made of brick. And all the people are older. Some have regressed, some are stagnant, some have moved forward, some have changed into completely different people, which is as it would be in life."

Other than the late Powers Boothe (Cy Tolliver), who died in 2017, all of the original cast is back — an impressive feat, seeing as several of them are currently in other shows. In classic Deadwood fashion, there is both a wedding and a funeral in the film, with Sol (John Hawkes) and Trixie (Paula Malcomson) finally tying the knot after giving birth to their baby boy, Joshua. And whereas in the original run, Whitney Ellsworth was killed by villain George Hearst (Gerald McRaney), this time around it's Charlie Utter who won't give up his land and is unceremoniously offed.

By this point, Hearst is a junior senator in California, the easily manipulated E.B. Farnum is now town mayor, and Martha and Seth Bullock — who now have several children of their own — run the town hotel. As with most Deadwood plots, both nothing and everything happens simultaneously. Former paramours Alma Ellsworth (Molly Parker) and Bullock are resigned to looking longingly at each other, Calamity Jane and Joanie are quite formal with one another after a long absence, and Al is just as foul-mouthed as ever. Swearengen, it should be noted, is still struggling with health problems, as his character was in the original show run.

However, some things have changed. In the 10, in-universe years since the Deadwood series finale, Alma's adopted daughter, Sofia, has become a bona fide woman. The widow herself has become even more wealthy, which allows her to buy the the now late Charlie Utter's gold claim out from under Hearst at an auction — much to his chagrin.

Furthermore, there are several storylines that are hinted at, which viewers can expect to occur after the events of the film — things like Sol's running for office, which Al advises he do, and Joanie and Jane finally getting their happy ending by setting out for France. On his deathbed, Swearengen informs Trixie that he's leaving the Gem to her, which she and Sol briefly discuss transforming into a dancehall.

Speaking of the Gem owner, fans are privy to his final moments in the movie, with Trixie by his side. When his former employee realizes that Al is taking his last breaths, she starts reciting the Lord's Prayer. "Our father, which art in heaven—" she begins. "Let him f*cking stay there," Swearengen says, haltingly. To a somber version of "Waltzing Matilda," the moment is a fitting — albeit uncharacteristically sappy — ending to the franchise and mirrors that of the show. Whereas in the Season 3 ending, Al was cleaning up the mess he'd made in order to protect Trixie, here he is at the end of his life, and Trixie is taking care of him. It's a far cry from their abusive relationship at the start of the series and reminds fans just how far the vulgar saloon owner has come.

As for Hearst, Bullock arrests him for the murder of Charlie Utter. And while it's unclear whether the charges will stick (he is a politician now, after all), it's comforting to know that he hasn't gotten off quite as scot-free as in the series finale. In this sense, all of the loose threads left hanging in 2006 are finally tied off in 2019.